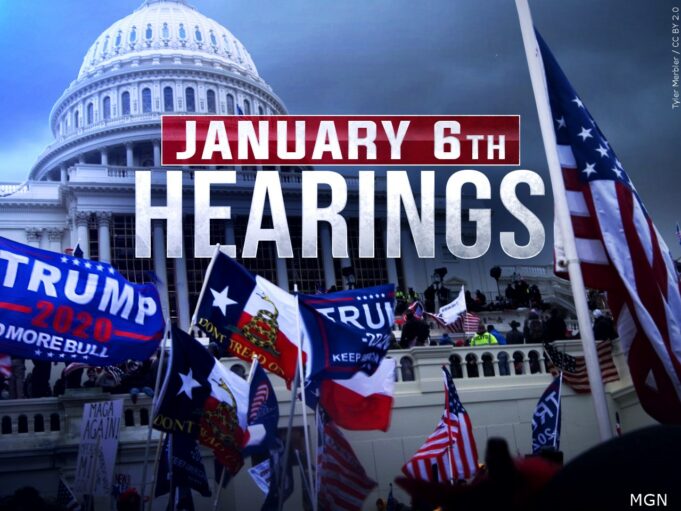 Presenting what committee members called new evidence by a former Trump Administration senior aide, the sixth hearing to investigate the attack on the U.S. Capitol, moved up from its original August date, offered troubling testimony detailing the days leading up to and during the attacks.

“In our hearings over the previous weeks, the Select Committee has laid out a multi-part pressure campaign, driven by the former president, aimed at overturning the results of the 2020 presidential election and blocking the transfer of power,” said Representative Bennie Thompson (D-Miss.), January 6th Committee Chairman, in his opening remarks.

“In recent days, the Select Committee has obtained new information dealing with what was going on in the White House on January 6th and in the days prior. I hope everyone at home will listen very closely,” he said before reintroducing the committee vice-chair, Rep. Liz Cheney (R-Wyo.) during the Jan. 28 hearing.

Stating that the first five committee hearings received a significant number of testimonies, including those from Republicans, former Trump Administration Justice Department officials, Trump campaign officials, and a prominent conservative judge, Committee Vice-Chair Cheney explained that the new witness, Cassidy Hutchinson, a Republican and former senior aide in the Trump White House, touched on several relevant and cross-cutting topics important to future hearings and the outcome of the entire investigation. Ms. Hutchinson served as assistant to former Trump Chief of Staff Mark Meadows.

Rep. Cheney asked Ms. Hutchinson to explain comments made by President Trump’s lead lawyer, Rudy Giuliani, four days before January 6, 2020, after an evening meeting between him and Mr. Meadows.

As the one hour and forty-three-minute hearing continued, Ms. Hutchinson’s testimony revealed that Mr. Trump knew extremist groups would not only be present in Washington, D.C., on January 6, but that he also knew armed individuals including those wearing body armor, were in the crowds and marching toward the Capitol immediately after his speech that afternoon.

Ms. Hutchinson, who testified she was in one of the tents used by the president during his speech, said Mr. Trump was furious over the optics of the rally space because magnetometers (mags) at the Ellipse deterred many people from entering. She also said Mr. Trump demanded they be removed. Magnetometers are devices used to detect the presence of metal objects and are also known as metal detectors.

“He felt the mags were at fault for not letting everybody in, but another leading reason, and likely the primary reason, is because he wanted it full and he was angry that we weren’t letting people through the mags with weapons, what the secret service deemed as weapons, but when we were in the off stage announce tent, I was in the vicinity of a conversation where I overheard the president say something to the effect of, ‘I don’t care if they have weapons, they’re not here to hurt me, take the ‘f-ing’ mags away!’ ” Ms. Hutchinson said in a videotaped deposition and replayed to the audience during the committee hearing.

She also said Mr. Trump, angered over White House lawyers urging the president’s speech writers to remove certain rhetoric from his address—and with his security detail preventing him from accompanying those marching toward the Capitol—Ms. Hutchinson said Mr. Trump displayed fits of rage, up to a disputed physical altercation within the presidential limousine, and violent behavior inside the Oval Office dining room.

Mr. Trump and several of his supporters swiftly moved to discredit Ms. Hutchinson with the former president calling her “bad news” and a “third rate social climber,” on his Truth Social site reported several media outlets.

In his watershed book, “The Fall of America,” published in 1973, the eternal leader of the Nation of Islam, the Most Honorable Elijah Muhammad, wrote that it is dissatisfaction that brings change and of the inevitable fall of America due to her wickedness and evil. And, in particular America’s divine chastisement that she suffers for the horrors of slavery, suffering and death perpetrated on Black people and the genocide perpetrated against the Indigenous of this land. The Bible also prophesizes that Satan, or highly intelligent and evil White people and institutions, would begin to destroy one another. That is exactly what is happening today.

“The dissatisfied are gaining everyday more and more among the people whom they hope to bring into the same condition that they are in. And today nothing is made more clear to the chief-maker of dissatisfaction,” Mr. Muhammad wrote on page 101 of his profound and prophetic book.

“The scientists of America know that America is on her way out. And since you, Black man, are the righteous, perhaps all of you will be saved; for you are bound to submit when you see what is coming,” the Messenger continued.

During his Saviours’ Day message to America and the world, “The Unraveling of a Great Nation,” on February 23, 2020, the Honorable Minister Louis Farrakhan said, “There’s a verse in the Qur’an, it’s in the 16th Surah, the 92nd verse and it says, ‘Be not like her who unravels yarn, disintegrating it into pieces, after she has spun it strongly.’ ”

“Her here is not talking about a woman, as such, but if you see somebody knitting something, with a design, and they leave it not secured one stitch; and then the same woman who stitched it strongly starts pulling on the yarn that she has knitted until it comes to pieces. That’s what’s happening to America as we speak,” Minister Farrakhan warned.

According to The Washington Post, Quinnipiac University, June 2022 polls reveal stark contrasts between Americans regarding their perceptions of the January 6 attack, the hearings and their possible outcome:

Clearly demonstrating impassioned divisions along partisan lines, and with the mid-term national elections only months away, will the January 6 hearings change enough hearts and minds to save Democrats from a Republican takeover in both houses of Congress?

According to Politico, Republican strategists believe they will pick up 30 to 40 congressional seats in the mid-terms and describe how they plan to create a Republican majority.

“Take the strategy, take the messaging, take the data and make sure that it’s being applied in every aspect of the campaign from the TV ads and the digital ads, but also, who we are talking to on the ground, where the candidate’s going,” said Kristin Davison of Axiom Strategies, who helped to elect Virginia Governor Glenn Youngkin to office over incumbent Democrat, Terry McAuliffe in 2021.

“Campaigns that win are able to connect that strategy and that day-to-day and that minute-to-minute execution of the campaign, and do it well, it’s the campaign that somehow disconnects along the way that usually don’t make it.”

As of June 29, Axios reported that Mr. Trump won seven and lost zero of nine U.S. Senate endorsements; won 14 and lost five out of 27 U.S. House of Representatives endorsements; and won nine and lost six out of 21 statewide endorsements. Should either the House or Senate take on Republican majorities, the door will be open for Mr. Trump to run for office in 2024, following in the footsteps of President Grover Cleveland who served two split terms from 1885 to 1889 and 1893 to 1897, respectively.

But, in the face of an impending global recession, rising interest rates and massive troop deployments in Europe, will Republican infighting and the possibility of more political violence on the streets allow America to even make it to November without another crisis or state of emergency?

“I’m a conservative Republican and I believe deeply in the policies of limited government, of low taxes, of a strong national defense, I believe that the family is the center of our community and of our lives, and I believe those are the right policies for our nation,” Rep. Liz Cheney said during a speech on the state of the Republican Party at the Ronald Reagan Presidential Library and Museum on June 29, “but I also know at this moment, we’re confronting a domestic threat that we have never faced before, and that is a former president who is attempting to unravel the foundations of our constitutional republic.”