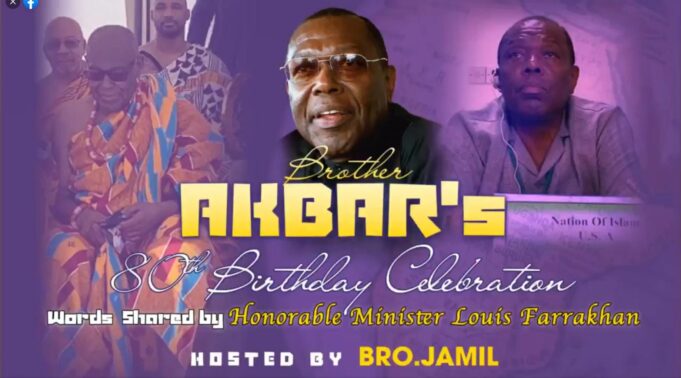 Family, friends, and associates of Brother Abdul Akbar Muhammad, known widely as a decades-long companion of the Honorable Minister Louis Farrakhan and international representative for the Nation of Islam, hosted a virtual 80th birthday celebration linking participants between Ghana, West Africa and various other locations throughout America and the world.

Highlighting a life of service to the Black diaspora, Indigenous people, and the world in general as a student of the Teachings of the Most Honorable Elijah Muhammad, Akbar Muhammad entered the Nation of Islam through New York’s Temple No. 7 under Minister Malcolm X, and later, under the leadership of Min. Farrakhan, eventually rising to the post of Min. Farrakhan’s international representative.

Samimah Aziz, the oldest of Student Minister Akbar Muhammad’s children, began the evening stating she agreed that her father has been a great servant to the people and that his service, as a helper of Min. Farrakhan, has been a positive contribution to humanity.

“In 1979, our beloved Minister and leader delivered a lecture entitled, ‘Diamonds Among Men’ (and) during the course of that lecture, the Minister shared that: ‘We are given for our advancement and healing men and women who are born to advance our liberation,’ I believe that my father, affectionately known as Brother Akbar, is such a man,” she said of the message from nearly 44 years ago.

The evening’s official host, Student Minister Jamil Muhammad, introduced Imam Misbahudeen Ahmed-Rufai of Nigeria, who said he thanked Allah (God) for the life and service of Brother Akbar Muhammad, adding that he first met him in the mid-1980s and recounted many other events on the African continent in which he witnessed and worked with him.

“I remember when I first met Brother Akbar in Ghana during the 1985 world tour of the Honorable Louis Farrakhan,” stated Imam Ahmed-Rufai during the live June 25 webcast. “We fell in love with one another right from that moment and Brother Akbar shared with me so much since then. As a brother, and like a father, a matter of fact, he is the father-in-law that I never had,” the imam said of his years of knowing his friend and brother.

“One of the things I am reminded of every time when I see him (is), the Prophet Muhammad, peace be upon him, said: ‘The best of humanity is the one who, no matter how many years he spends in this life, he spends it in the good of humanity serving others,” Imam Ahmed-Rufai said before making a prayer of supplication to bless Akbar Muhammad and his family with favor and success.

The son of a World War II soldier and of a mother who refused to accept the indignities of cleaning the homes of White people in the pre-Civil Rights South, Akbar Muhammad, who came to be known as Larry 4X in the Nation of Islam years later, described how moving from Virginia to what is now Jamaica-Queens, New York, affected his life as a child.

Sharing an experience, he remembers well to this day, he recounted an incident regarding a classmate he used to bully in elementary school and described how being beaten in the public affected his thinking later in life.

“The whole school at lunchtime was there looking at this fight, a major fight, and none of the teachers came out to stop it, and he whipped my behind; he beat me real good,” he recalled from his childhood as a fifth or sixth grader.  “I was hurt and embarrassed, but it taught me a valuable lesson, it stuck with me. You can’t be a bully and if you pick on people, one day they will get tired of it and they will come against you and they will be the winner in the end,” he said.

Interspersing his testimonials with additional greetings of love from well-wishers throughout the evening, Akbar Muhammad spoke of individuals impacting his life such as those teaching him to stay abreast of current events and other issues beyond those from his immediate surroundings.

“In my homeroom class, there was a man going for his law degree, or he may have had it already, George Patrick Sweeney, and what he taught me to this day, I have those lessons, and I thank God for him,” he said. “Mr. Sweeney used to send me to take his law papers downtown. But the things that he taught me that really stuck with me, number one, he taught me how to read The New York Times. He said, “When you grow up, you should read a newspaper every day,”’ Akbar Muhammad recalled. “So, to this day, I still read the New York Times.”

Sharing with viewers a brief history of her life as a young person and how her father influenced her intellectual development, Germaine Coston said the knowledge contained within the store he ran, “Books and Things,” located on the ground floor at what became Malcolm X Blvd. and 116th Street, the site of Mosque No. 7, was an important factor.

Inspired to sing for her father’s 80th birthday, another of Akbar Muhammad’s daughters, Ruqqiyah Muhammad, a songwriter and singer, played the piano and sang in celebration of her father’s life, the words and the melody delivered a message of peace and deliverance.

As the Min. Farrakhan’s international representative, Student Minister Akbar Muhammad has traveled all over the world, establishing relationships and opportunities everywhere he has gone, including aiding in the establishment of the Nation of Islam African Mission in West Africa.

“When he was assigned to the position of international representative over the international mission of the Nation of Islam headquartered in Ghana, I requested, to our Brother Minister, if I could go and assist him. And I will be forever grateful and thankful that the Honorable Minister Louis Farrakhan agreed to my request, and I became the assistant to Brother Akbar,” said Halim Muhammad, a longtime friend and helper of Brother Akbar who helped to establish institutions such as the Nation of Islam Information Center in the capital city, Accra. “It’s truly been an awe-inspiring and life-building effort for me that has transformed my life immensely.”

He added that Brother Akbar Muhammad was instrumental in organizing events such as those bringing groups like Public Enemy to Ghana in the early 1990s, and celebrities such as Jermaine Jackson, who visited victims of the Liberian Civil War seeking refuge in Ghana. Bro. Halim Muhammad also said Brother Akbar Muhammad helped to organize medical teams led by the then-Nation of Islam Minister of Health, Dr. Abdul Alim Muhammad, as well as the first international Saviours’ Day convention held outside of the United States in 1994, where Ghana’s president, Jerry J. Rawlings, was also in attendance.

“You have been so much an inspiration to me through my whole life. You’ve meant a great importance to Public Enemy. Your story’s immeasurable. The Nation has taken us to places in the world that nobody else has ever taken us, and you of all people can explain each one of these places that we have gone to and hadn’t gone to,” Chuck D of Public Enemy said to Akbar Muhammad and others viewing the birthday celebration online. “A lot of people should be paying attention to everything you say. You are like an unprecedented resource for us understanding that the strength of us Black folk is that Diaspora.”

Regarding additional lessons learned throughout his life, Brother Akbar Muhammad shared an anecdote from his youth of working for a Jewish-owned printing company in New York as a ninth grader. He said what he witnessed in the mid-1950s should be a lesson for Black people today and said he would watch them arguing amongst themselves, even cursing one another out, but then go right back to doing business with one another.

“What stuck to me is they would argue and go right back to business,” he said. “So, the lesson I learned from that was that they called non-Jewish people ‘goyims.’ They were not going to take their Jewish money and spend it with a ‘goyim,’ even though they just got through cussing each other out, and it’s a lesson we should learn about our own self-interest as a people,” Brother Akbar Muhammad explained.

“And we don’t have that because, in plantation life, the slave master always pitted us against one another, so we were always fighting one another and not caring for one another,” he added.

Recalling how he first attended the Muslim temple, as it was called at that time, in New York City, and trained in the ministry class under Minister Malcolm X, Brother Akbar Muhammad shared with viewers how his life changed for the better as opportunities, made available by the Honorable Elijah Muhammad, allowed him to rise in the ranks of the Nation of Islam.

“We were so loved by the people that the people looked for the (Muhammad Speaks) paper and we were happy to be out there,” Brother Akbar Muhammad said, pointing out how he was the mosque’s top paper salesman, giving him the opportunity to invite guests to weekly lectures at Temple No. 7, allowing for Min. Malcolm to later open Temples 7B, 7C, 7D, and other satellite entities throughout the city.

“When the Minister came to New York, he was sent there in May of 1965, he didn’t try to change or close those places down that Malcolm opened. Allah blessed him to see there was good in this (and) we continued it and ratcheted it up to the next level. The mosque was a great place and the people wanted to be there,” he said.

Decades later, as Min. Farrakhan’s international representative, he has traveled to more than 154 countries, approximately 75 percent or more of all the countries in the world, “a unique and an extraordinary accomplishment,” said others participating in the virtual birthday celebration.