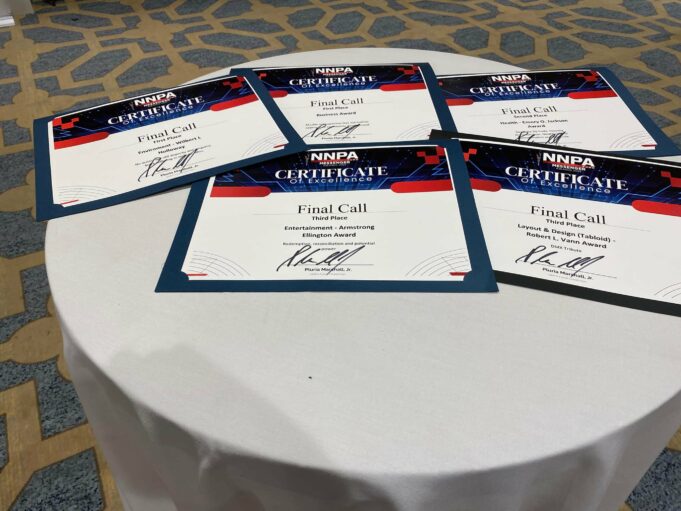 NEW ORLEANS—The Final Call won five awards at the 2022 National Newspaper Publishers Association Fund Messenger Awards, held here as the association for Black-owned newspapers met in-person for the first time in two years. The awards saluted the best of the Black Press as NNPA marked the 195th anniversary of Black newspapers in the United States. The group includes 235 member publications and nearly 300 entries were submitted this year, which event organizers said made for incredible competition.

“We thank Allah (God) and His divine servants the Honorable Elijah Muhammad, the founder of our newspaper, and our publisher, the Honorable Minister Louis Farrakhan, for this great victory and the great opportunity to work in this cause,” said Final Call editor in chief Naba’a Muhammad, who attended the June 23 event and the conference. He is also an NNPA board member representing Region 3, which consists of Black-owned newspapers in the Midwest.

“We are honored to serve as a watchman over our people and to share the divine teachings of the Nation of Islam with our community and the world. By Allah’s (God’s) grace, we will continue to seek and tell the truth and give the men of the Nation of Islam, the Fruit of Islam, who take our paper to the people, and our people a product filled with light, life and power. Our newspaper is a tool in the work of the resurrection of our people. We are so proud of our staff laborers and contributors for their commitment and hard work,” added editor Muhammad.

The Final Call won first place entries for Environment reporting in the Equity category based on a story by Final Call contributor Michael Z. Muhammad; and reporting in the Business category by contributing editor James G. Muhammad, who is also a past Final Call editor in chief. Contributing writer Anisah Muhammad won a second place award in the Health category. A third place Entertainment award was earned for a story written by Naba’a Muhammad and Charlene Muhammad. Production Department designers and laborers Timothy 6X, Nathan Muhammad, Nadir Muhammad and Sundari Muhammad won a third place for tabloid Layout and Design.

“For over four decades, the NNPA Fund awards program is similar to the Academy Awards or Pulitzer Prize recognizing excellence in journalism and entrepreneurship in the Black Press of America. With award entries from across the country, judges in journalism and corporate communication select the Best of the Best nationwide,” said the event organizers, who also handed out scholarships to Black students from HBCU’s pursuing degrees in journalism, English, media or related fields.

The fund is the non-profit division of the National Newspaper Publishers Association, an 80-year-old trade association that represents Black-owned community newspapers across the U.S. The foundation delivers value to NNPA members through professional development, strategic partnerships and heightened access to resources.

The NNPA Fund also “provides professional, academic and pre-professional training for minorities in media, promotes charitable, educational and literary activities that advance high standards in ethnic media, and manages a scholarship program, an internship program, an awards recognition event and other projects and initiatives.”

Look for more coverage in an upcoming edition of The Final Call.