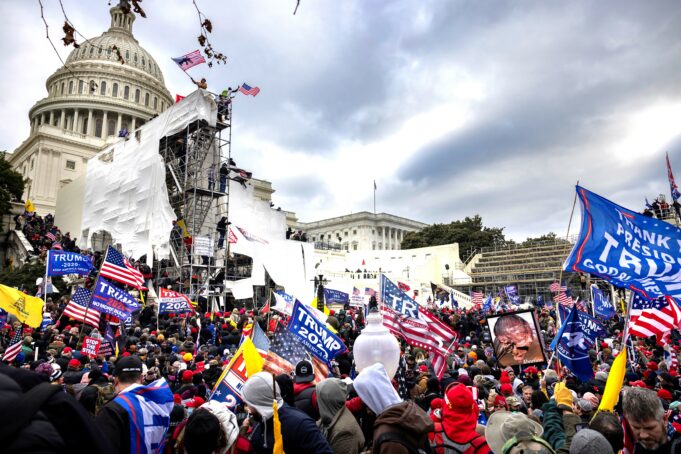 The country remains bitterly divided over who should be held accountable for violent insurrectionists breaching the grounds of the United States Capitol. The hearings of “The U.S. House Select Committee to Investigate the January 6th Attack on the United States Capitol” commenced in early June amid the backdrop of a nation that remains at odds with itself.

As witnesses ended a second week of testimonies before the select committee investigating the attacks of January 6, 2021, that occurred just weeks before the election winner was to assume office, questions remain about what if anything will come from the investigation? What has transpired also serves as further evidence of America’s continued downfall and unraveling.

As the hearings continue unfolding before a country reeling from economic woes brought on by skyrocketing gas prices, supply-chain problems impacting the availability of food and other necessities, it bears witness to the divine teachings and warning of the Most Honorable Elijah Muhammad, Eternal Leader of the Nation of Islam.

In 1965, Mr. Muhammad warned in his seminal book, “Message to the Black Man in America,” that truth would eventually expose the wicked and their rule over the world and that His words should be taken seriously.

“Do not take what I am teaching and writing lightly,” Mr. Muhammad wrote on page 100 of his landmark book. “It is the truth from your God and you shall soon bear me witness that it is the truth. Allah has said to me that we are living in the end of the world of White rule, a race whom Allah has made manifest to you and me as being real devils,” He said.

His top student and National Representative, the Honorable Minister Louis Farrakhan,  has warned what is happening signifies the ongoing fall of America as taught by his teacher and the unraveling of a great nation. “The condition of America is puzzling. The world is looking at a country going to hell,” the Minister warned in February 2020 ahead of the pandemic and national elections.

Infuriated by his loss in the 2020 presidential race to current President Joe Biden, former-President Donald J. Trump encouraged his supporters—enraged over the certification of electoral votes by Congress—to march on the Capitol, making chaos and violence the primary highlight of their ‘Stop-the-Steal Rally.’

Day three of the select committee hearings, broadcast live on June 16, opened with an explanation of the vice-president’s role during presidential elections. “The Constitution says that the vice-president of the United States oversees the process of counting the Electoral College votes, a process that took place on January 6, 2021,” Committee Chairman Bennie Thompson (D-Miss.) said. “Donald Trump wanted Mike Pence to do something no other vice-president has ever done,” Rep. Thompson began, referring to the former vice-president.

“The former president wanted Pence to reject the votes and either declare Trump the winner or send the votes back to the states to be counted again. Mike Pence said no,” Rep. Thompson said during his remarks.

“That courage put him in tremendous danger when Mike Pence made it clear that he wouldn’t give in to Donald Trump’s scheme. Donald Trump turned the mob on him, a mob that was chanting: ‘Hang Mike Pence.’ A mob that had built a hangman’s gallows just outside the Capitol.”

Vice-President Pence’s words before the Federalist Society, a Conservative group dedicated to limited government, confirmed Ms. Cheney’s statements on day three of the hearings. “President Trump said that I had the right to overturn the election, but President Trump is wrong,” Mr. Pence said in a video clip presented as additional evidence for the public record.

“The violence was no accident, it represents President Trump’s last stand, most desperate chance to halt the transfer of power,” said Rep.  Thompson during his opening remarks on day one of the nationally televised hearings.

The first televised hearing attracted about 20 million people tuned in to 11 different networks, according to Nielsen.

“You may hear those words and think, this is just another political attack on Donald Trump by people who don’t like him. That’s not the case,” Mr. Thompson said. “My colleagues and I all wanted an outside independent commission to investigate January 6, similar to what we had after 9/11.”

Yet, the full Congress would not authorize an impartial outside investigation, Rep. Thompson said, recalling how the world watched hundreds of mostly White insurrectionists, angered by Mr. Trump’s failure to secure a second term, stormed the U.S. Capitol building, smashing windows and breaking down doors, as they ransacked offices in search of documents, rampaging through its halls and threatening members of Congress.

Mr. Duncan Kirkwood, 37, who resides in New York as a global resiliency trainer, is a former lieutenant and platoon leader in the Army National Guard. He told The Final Call it is unusual for the government not to have gathered intelligence on and prepared for the presence of groups such as the “Proud Boys” and given the contentiousness of the political climate, for not having had the appropriate personnel on standby as a quick reaction force.

“My first thought was why are they not teargassing the crowds or deploying any crowd control measures like rubber bullets, CS gas, or flashbangs, or something?” Mr. Kirkwood said, referring to the high-profile nature of the U.S. Capitol building. “I know if those rioters were Black, there would have been bodies laid out across the ground, they totally would have treated them differently.”

The January 6attack on the Capitol raises additional questions not only on issues of greed and leadership’s state of mind, but also on how inordinate self-interest and the lust for power is sinking the country as the façade of American exceptionalism continues to unravel.

Aaron Dusso, Ph.D., is an associate professor and chair of the Department of Political Science at Indiana University. He told The Final Call that civil unrest and political discord is nothing new to the American experiment and although the country’s institutions are robust and have endured many conflicts up to and including the Civil War, they are not unbreakable.

He also said when people who are in office refuse to abide by what has been a standard method of political succession, it constitutes a clear and present danger to the entire system.

“One of the challenges of what was highlighted in the opening night of the hearings is that this is the first time in United States history that a sitting president has tried to stop the peaceful transfer of power, that’s something the United States hasn’t faced and it’s a particularly big challenge,” Dr. Dusso said the morning after the first hearing.

“People who are elected officials, who are running governments, who have real power, they have to be willing to relinquish power when elections don’t go their way, and when they try to stop elections from happening, that’s when the end of your democracy is coming closer.”

Agreeing that an erosion of the U.S. Constitution is detrimental to the American public in general, other scholars suggest that the adversarial nature of American politics, long maintained at the expense of Black, Brown, and poor people, can no longer countenance the inevitable demographic changes, projected by the U.S. Census, making Whites a minority population by the late 2060s.

Dr. Gerald Horne, the Moores Chair of History and African American Studies at the University of Houston, told The Final Call that Black Americans should regard the January 6violence as more than just an expressed desire among disaffected Whites to overthrow the government. He also said the attack is a serious warning for Blacks to reconsider the White liberal model that has called for Black social justice and political inclusion over economic justice and Black political independence.

“Mr. Trump has not been repudiated by the base of the Republican Party, in fact, he has been embraced,” Dr. Horne explained. “We know that Black people will be the primary victim(s) of an impending U.S. fascism which should call into question, once again, the kinds of methods and methodologies that our liberal friends in the Black community have been pursuing in order to vindicate our rights,” he added.

“The Republicans have made it clear that if they take control of the House in November, they plan to investigate the investigators and I’m sure at the top of the list will be Congressman Thompson,” Dr. Horne said. “We need to protect that brother because, obviously, he’s in the crosshairs, but the larger issue is a failed strategy over at least the last 75 years.”

Ray Winbush, professor and director of the Institute of Urban Research at Morgan State University, said Rep. Thompson, in defining the violence of that day as an attempted coup, essentially accused the former president of treason, prompting former officials and members of the Trump family to distance themselves from his assertions while loyalists to the former president doubled down their support.

“Clearly, the insurrection on January 6 consisted of people who are preparing for a race war. Last night, Liz Cheney and Bennie Thompson both referred to the Proud Boys. There is no doubt they are a White supremacist group and what we saw there was like a lynch mob,” Professor Winbush stated after the first hearing aired. “They literally wanted to lynch (former vice-president) Mike Pence and I think what we’re missing as Black people is how serious the White supremacists are in this country (toward) igniting a race war,” he added.

Stating that Mr. Trump’s advisors told him prior to the January 6attack that President Biden had in fact won the 2020 election, Rep. Cheney placed the violence of that day at the feet of the outgoing president and said much of the chaos leading to the violence was premeditated.

“The Trump campaign legal team knew there was no legitimate argument, fraud, irregularities or anything to overturn the election, and yet, President Trump went ahead with his plans for January 6anyway,” Rep. Cheney said. “Hundreds of our countrymen have faced criminal charges, many are serving criminal sentences because they believed what Donald Trump said about the election, and they acted on it.”

Mid-Atlantic Regional Student Minister Abdul Khadir Muhammad of the Nation of Islam’s Washington, D.C. Mosque No. 4, told The Final Call that the peace and love displayed by the 1995 Million Man March, the 2000 Million Family March, the 2005 Millions More Movement, and the 10-10-15 Justice or Else March, when compared to the chaos of the insurrection,reveals the nature of incoming and outgoing worlds.

“There’s no comparison, all of what we have done in the name of Master W. Fard Muhammad, and the Most Honorable Elijah Muhammad, led by the Honorable Minister Louis Farrakhan, and all the people that came to help him, we had a great and tremendous positive turnout,” Student Minister Muhammad stated.

“When I found out what (Trump supporters) were in town for, we stayed clear of all the foolishness. You just have to follow the Honorable Minister Louis Farrakhan’s instructions and get out of the way,” he said. “Satan is casting out Satan and his kingdom is not standing.”