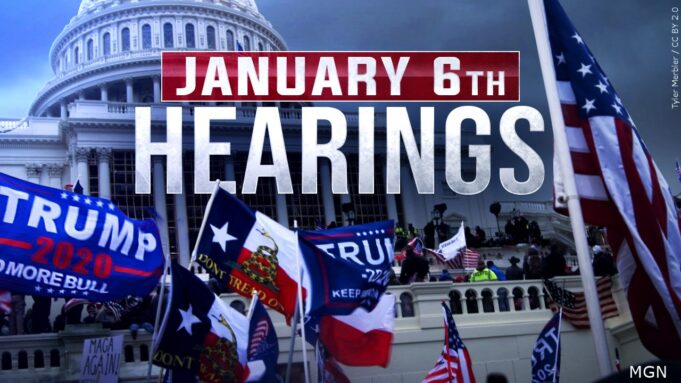 WASHINGTON—White rage that culminated in an attempted coup of the U.S. government was on display for the world to see at the first House select committee hearing investigating the Jan. 6, 2021, Capitol riot.

From the witness testimonies to the never before seen video footage, the fury expressed by President Trump and others he incited to come to D.C. to riot was put on front street for global viewing.

“White rage is very White, and very dangerous,” Zayid Muhammad, former head of the New Black Panther Party, told The Final Call. “White rage is expressed in some of the things that we have seen since then, Buffalo, Uvalde. You can go up and down the list.

The constant police terror, and the attack on the ballot, is eerily comparable to the beginning of the end of what was known as the Reconstruction period. That was a brief  window in this country’s history, where our people were allowed to do for themselves, but with a cover of federal protection.”

“There was an election, a nasty election in 1876, (Democrat Samuel Tilden ran against Republican Rutherford B. Hayes) that was very close. To resolve the closeness of the election, a deal was made (Rutherford B.  Hayes) to pull the federal protection off our people. Between 1870-something to the end of the 19th century, we saw White rage wreaking havoc in a horrifically, terroristic way on our people in the South. It robbed them of their land, their ballot, their dignity, and their freedom.”

He added, “I don’t think they’ll get that far this time around, but the fact that they are trying hard to get there and doing that without a lot of pushback or accountability is something that should definitely tell our people that we need to be prepared to defend ourselves by any means necessary.”

The second day of the hearing included video and live testimonies from those in Mr. Trump’s administration including former Attorney General Bill Barr and other non-administration officials.

Mr. Barr in testimony that aired June 13 said he worried in the aftermath of the 2020 election that then-President Trump had become “detached from reality” as Mr. Trump kept repeating claims about voter fraud such as rigged voting machines. “And I was somewhat demoralized because I thought, ‘Boy if he really believes this stuff, he has lost contact with—he’s become detached from reality, if he really believes this stuff,’” said Mr. Barr during his testimony.

The committee’s next hearing is scheduled for June 15.

The The opening day of the hearing June 9 showed never before footage taken by security cameras outside the U.S. Capitol. They gave a bird’s-eye view of the riot starting when the mob first gathered near the Peace Monument to the moment it pushed past police lines and entered the Capitol building.

“Any legal jargon you hear about ‘seditious conspiracy’ … ‘obstruction of an official proceeding’ … ‘conspiracy to defraud the United States’ boils down to this: Jan. 6 was the culmination of an attempted coup. A brazen attempt, as one rioter put it shortly after January 6, ‘to overthrow the Government.’ The violence was no accident. It represented Trump’s last, most desperate chance to halt the transfer of power,” Committee Chairman Bennie G. Thompson (D-Miss.) said in his opening statement.

“It represented Trump’s last, most desperate chance to halt the transfer of power. And ultimately, Donald Trump—the president of the United States—spurred a mob of domestic enemies of the Constitution to march down the Capitol and subvert American democracy.”

The committee conducted 1,000 interviews and gathered 140,000 documents over the course of the year to investigate what happened. The first hearing, June 9,  was an opportunity to show the world what they discovered but also to remind the country of the carnage at the Capitol.

British filmmaker Nick Quested was embedded with and documented what the Proud Boys did.  Mr. Quested testified at the hearing he watched “the crowd turn from protesters to rioters to insurrectionists.” His footage was shown and highlighted the insurrection that led to 140 police officers being injured and the deaths of at least seven people after facing or being part of a mob armed with bear spray, stun guns, and zip ties that could be used as handcuffs.

“Look at what they did to the major cities that Blacks built like Rosewood and Tulsa.  All of that was White rage. Look at all of those in many other cities that replicated that destruction anywhere African-Americans were able to support themselves, and begin to get a foothold economically in society, White rage turned it around.”

What happened on Jan. 6 was so shocking  even to the Capitol Hill police who were totally unprepared for the rioters even though as early as Nov. 9, 2020, the FBI had intel warning of post-election violence by the far right. That intel increased to include Senate Staff Reports, a Government Accountability Office report and more FBI tips. All of which seemed to be ignored.

Capitol Police Officer Caroline Edwards testified that she was in a “war scene” during the riot.

“It was something like I’ve seen in movies. I couldn’t believe my eyes,” Ms. Edwards said.

“There were officers on the ground. They were bleeding. I was slipping in people’s blood.

Footage showed exactly what she was describing.

“Never in my wildest dreams did I think as a police officer, as a law enforcement officer that I would find myself in the middle of a battle,” Ms. Edwards said. “I am not combat-trained. That day it was just hours of hand-to-hand combat.”

The ongoing conflict and strife being witnessed in America is further evidence of a country falling apart as taught by the Most Honorable Elijah Muhammad. What he revealed decades ago is coming to pass. “America, in trying to hold her place as the greatest power among the nations of the earth, is one of the most troubled countries on earth today,” Mr. Muhammad wrote in his book, “The Fall of America.”

His top student and National Representative, the Honorable Minister Louis Farrakhan, told the world in early 2020 that what was being witnessed was the “unraveling of a great nation.”

“When you unravel something, you undo twisted, knitted, or woven threads; you investigate and solve or explain something complicated or puzzling. The condition of America is puzzling.  The world is looking at a country going to hell,” Min. Farrakhan stated during his Saviours’ Day message February 23, 2020, in Detroit.

Political scientist, author and commentator Dr. Wilmer Leon was surprised it took a congressional hearing to make  what happened more public. He told The Final Call, “White backlash is predictable. It is pent up backlash to the election of Barack Obama to Kamala Harris as the vice-president and to this growing sense that Whites are being replaced in the United States.

“What was shown at the hearing should have been on national news from the very beginning. It also shows the lengths to which the political elite in this country will go to keep the American people in the dark about what’s really going on. It begs the question that a lot of people have asked what would have been the response of the Capitol police and the other law enforcement agencies that were involved in this, had the protestors been Black.”

He added, “What a lot of those people that were involved in the insurrection don’t really appreciate is that their sense of so-called privilege is really a delusion because many of them are suffering in the same place as everybody else. At the end of the day, without underestimating or dismissing the importance of racism in this country, classism is affecting them to untold depths. What they’re able to do to comfort themselves is wrap and warm themselves in their racism.”

“I have men and that I have soldiered with and love dearly. They were called insurgents and  have been in prison for over 40 to 50 years. Some have died in prison. Is the United States government going to hold White folks accountable in the same way that they charged our freedom fighters ? It remains to be seen, but if their notion of democracy and liberty and all of that pretty sounding stuff that they talk matters, that’s what should happen.”

“White folks can be awfully liberal on White rage. It happened back then, and I haven’t seen anybody strongly held accountable for what happened on January 6. The last time our folks had a major mobilization on D.C. there were troops. They didn’t have any Mickey Mouse police, there were troops. They were ready all over D.C. for something to get out of order with Black Lives Matter,” he said. “When it comes to our folks, restraint doesn’t happen.”

He added, “With all those police officers under attack at the Capitol, only one shot was fired. They shoot our people down, with hands up, saying ‘Don’t shoot.’ ”

“This country is divided, red state vs. blue state, Democrat vs. Republican. It’s divided by generation.  It’s divided by sex.  It’s now being divided by the vaccinated and unvaccinated. Everything that the Minister talked about in ‘Torchlight for America,’ if you look at it, it wasn’t addressed, and it wasn’t sustained,” he said, referring to the 1993 book written by Min. Farrakhan.

America did not follow the Honorable Elijah Muhammad and Minister Farrakhan’s gentle words of warning, and now the threatened Judgment of God comes to pass, said Min. Abdul Haleem Muhammad, in an interview earlier this year. “There’s a correlation between those two in my opinion, a correlation between the unraveling of America and our ambivalence and outright rejection of the admonition, recommendations, advice and guidance offered in ‘Torchlight for America,’ ” he added.