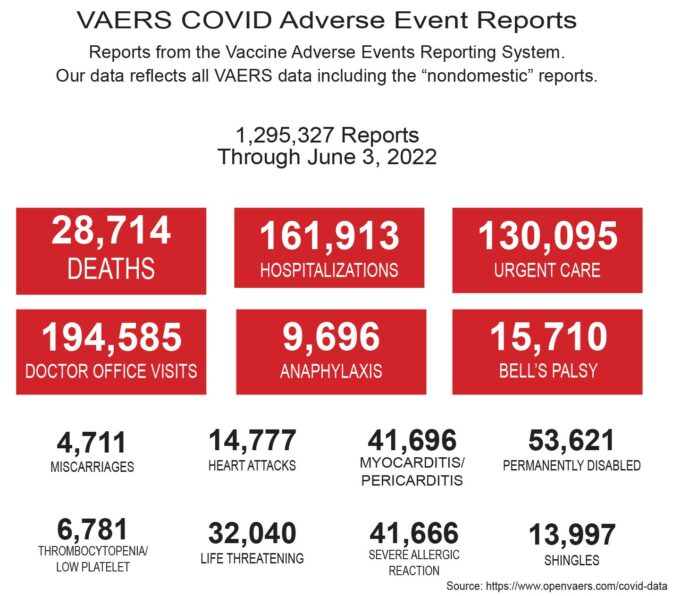 Thousands of deaths and adverse effects reports from the most controversial and clandestine vaccination program in the history of the United States, have come up missing from government databases. VAERS (Vaccination Adverse Effect Report System) is the voluntary report system of deaths and/or adverse effects of new drugs or vaccines, submitted by medical professionals, family, or any entity, including the experimental Covid-19 experimental mRNA shots.

In an article by well-known health and safety proponent, Dr. Joseph Mercola, he stressed that this is just one of mounting circumstances which should nix the Covid-19 vaccination onslaught: “… the U.S. Food and Drug Administration(FDA) and Centers for Disease Control and Prevention(CDC), which jointly runs VAERS, continue to insist the shots are ‘safe and effective’ and that not a single death has been directly attributed to the shot. Such claims are outlandish in light of the available data, and perhaps they’re starting to realize the pickle they’re in as well, because in recent months, investigators have discovered that VAERS reports are being deleted in ever growing numbers.”

But there is another revelation from across the Atlantic, revealed in an article dated June 1, 2022, from the Washington Standard that some “70,000 people died (in England) within 28 days of getting their COVID shot and 179,000 died less than 2 months after getting theirs.”

If the comparative reports here in America are in any way close, proportionately—when considering the population of the U.S.—then the death rate here is staggering, leading one to conclude there is reason to continue to lose a true count of the devastation here. Some prognosticators have predicted 10’s of millions will die over the next 3-5 years.

Recently, in the U.S., according to Dr. Mercola, “Data Analyst Albert Benavides has been analyzing VAERS data since the release of these novel shots. According to Benavides, at least 10,000 reports of death or serious injury following COVID ‘vaccination’ have vanished since the rollout of the shots—and they were not duplicate reports, which is a common ‘explanation’ for their removal.

“About 2% of all COVID jab-related reports are deaths, and about 5% of death-related reports are being deleted. Only the initial VAERS reports are available to the public. Updated reports are only viewable internally. That means we have no way of knowing how many of those who were injured have since died from those injuries. This is a loophole that can make a vaccine appear less deadly than it actually is.

An earlier VAERS data analysis by Benavides, reported by Steve Kirsch in November 2021, revealed there were by then already hundreds of serious adverse events associated with the COVID shot that were far more elevated than the admitted risk of myocarditis, identified by the Department of Defense (although that fact was for a time dismissed as ‘conspiracy theory’).

“The evidence in plain sight shows that they are either lying or incompetent. Or both,” Kirsch wrote. “In a … VAERS data analysis performed by our friend Albert Benavides (aka WelcomeTheEagle88), we found hundreds of serious adverse events that were completely missed by the CDC that should have been mentioned in the informed consent document that are given to patients.”

Dr. Mercola continues to repeat, “Publicly available data from VAERS clearly reveal that these shots are the most dangerous ‘vaccines’ ever created; they account for more injuries and deaths than all previous vaccines from the last three decades combined. Evidence also shows reports have been deleted.”

Some of the breakdown of the increasingly debilitating effects of the vaccine can be noted in summary for all ages affected.

“The data included a total of 28,532 reports of deaths—an increase of 220 over the previous week—and 235,041 serious injuries, including deaths, during the same time period—up 2,347compared with the previous week.

‘Excluding “foreign reports’ to VAERS, 825,454 adverse events, including 13,150 deaths and 83,454 serious injuries, were reported in the U.S. between Dec. 14, 2020, and May 27, 2022.”  However, this is not the scariest part of this or any VAERS report. The scariest part of the VAERS report is the disclaimer, which no one talks about or is permitted to talk about publicly. That disclaimer reads, if it can be called a disclaimer:

VAERS is the Vaccine Adverse Event Reporting System put in place in 1990. It is a voluntary reporting system that has been estimated to account for only 1% (read more about underreporting in VAERS) of vaccine injuries. OpenVAERS is built from the HHS data available for download at vaers.hhs.gov.” (Through May 27, 2022)