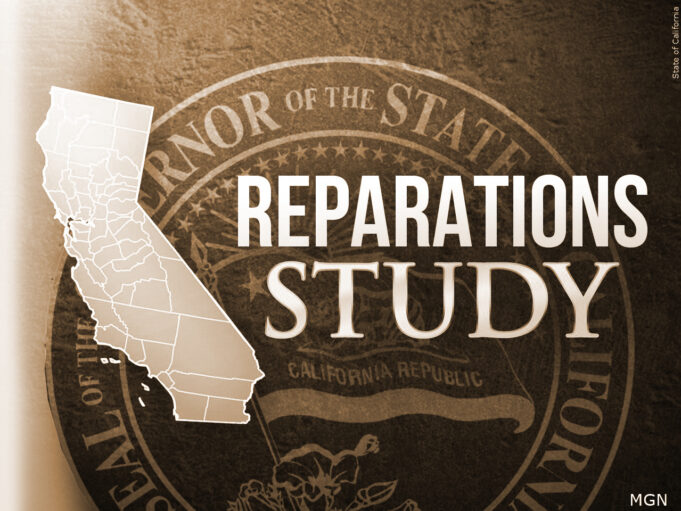 These are just some of the harms listed in an almost 500-page interim report released by the “California Task Force to Study and Develop Reparation Proposals for African Americans.” The report accuses the United States of perpetuating and creating new iterations of the “badges and incidents of slavery.”

“In order to maintain slavery, government actors adopted White supremacist beliefs and passed laws to create a racial hierarchy and to control both enslaved and free African Americans,” the report says. The government failed to give Black people full rights of citizenship, and instead of protecting its Black citizens, it “continued to enforce the racist lies created to justify slavery.”

“Today, 160 years after the abolition of slavery, its badges and incidents remain embedded in the political, legal, health, financial, educational, cultural, environmental, social, and economic systems of the United States of America,” the report continues. “Racist, false, and harmful stereotypes created to support slavery continue to physically and mentally harm African Americans today.”

Civil Rights attorney Nkechi Taifa, founding member of the National Coalition of Blacks for Reparations in America (N’COBRA) and director of Reparation Education Project, Inc., told The Final Call she’s cautiously optimistic on the final outcome of the report which was released June 1. She feels that the state of California has taken the lead, leapfrogging over the federal government in the reparations debate.

“We had hoped we would be at this point with H.R. 40, which is the federal reparations study bill, but that has not materialized, yet. California is taking the bull by the horns and is moving forward,” she said. “And other jurisdictions across the country are basically on its heels, seeking to do similar. The state of New York and the state of New Jersey are poised to pass legislation, and city councils and jurisdictions across the country are establishing task forces to look at the issues from the enslavement era and its legacies in their own backyard.”

Atty. Taifa is a commissioner on the National African American Reparations Commission and is author of a forthcoming book, “Reparations on Fire: How and Why It’s Spreading Across America.” She spoke on the issue of reparations at a recent TED Talks.

The nearly 500-page report goes in depth on how a Western, “free” state such as California harmed Black people through systemic discrimination. For example, in 1852, “California passed and enforced a fugitive slave law that was harsher than the federal fugitive slave law.” In the 1920s, “California sometimes even held more KKK events than Mississippi or Louisiana.” Thriving Black neighborhoods were demolished. Black people have found themselves living next door to hazardous waste. “Local governments in California have discriminated against, punished, and penalized Black students for their fashion, hairstyle, and appearance,” the report reads.

Atty. Taifa expressed that there was no safe haven for Black people, and California was no exception. “They were subject to the Fugitive Slave Act. So, every time we ran away, it didn’t matter if we just walked away, tiptoed away quietly in the darkness of the night like Harriett Tubman. It didn’t matter if we masterminded elaborate insurrections like Denmark Vesey. They were going to come after us,” she said.

The report outlines the state of Black California. It is home to the fifth largest Black population in the United States, after Texas, Florida, Georgia and New York, with about six percent of its population, or 2.8 million people, identifying as Black.

Black babies are more likely to die in infancy, and Black mothers giving birth die at a rate almost four times higher than the average Californian mother, the report says.

Created in 2020, the two-year task force is said to be the first state reparations task force in the United States. Task force members started meeting in June 2021 and plan to release a final report before July 1, 2023.

The report has been called “groundbreaking,” but Dr. Ray Winbush told The Final Call that it has its strengths and weaknesses. One of its problems, he pointed out, is the small section on the global nature of slavery and the limited mentions about Africa, “where most Black folk came from that were enslaved.”

“I just wish, instead of just having the national view of enslavement and reparations and then the California view of reparations and enslavement, that they would have talked about it as a global system that built up the wealth not only of California or the United States but of the entire White world,” he said.

Dr. Winbush, director of the Institute for Urban Research at Morgan State University, believes the report should have taken a Black nationalistic approach.

The report has a range of recommendations, including: implementing a detailed reparations plan; requiring incarcerated people to be paid a fair, market rate for their labor and allowing them the right to vote; eliminating state law immunities that shield officer misconduct; establishing a mortgage system that would guarantee low interest rates for qualified Black applicants; providing funding for free tuition to California colleges and universities; promoting healthy retailers in Black neighborhoods; raising minimum wage and creating free health care programs.

Atty. Taifa said a plan for reparations should not be something dropped out of the sky but should be informed by the injured parties themselves, i.e., the Black community as a whole.

“It is very critical that reparations not be what the attorney general and California or whoever says but what the people are asking for. I always say that the harms from the enslavement era and beyond were multifaceted, thus the remedies must be multifaceted as well,” she said.

The report also recommends the creation of the California African American Freedmen Affairs Agency, which would include branches for civic engagement, education, social services, cultural affairs, legal affairs and business affairs as well as a “genealogy branch in order to support potential claimants with genealogical research and to confirm eligibility.”

For the majority of the recommendations the report mentioned, Dr. Winbush said they’re aspirational, but “whether or not they’re going to be retained in the final report and if, after that, whether or not this stuff is going to be enacted is a whole ’nother story.”

“Those of us involved in the struggle to realize H.R. 40, the Congressional legislation, have never confined the reparations demand to only the period of enslavement. No, it’s also about the vestiges of slavery,” he said via text to The Final Call.

“What the California reparations task force has done is highlight the ongoing vestiges and harms, in somewhat of a contradiction to its earlier decisions that reparations should only apply to direct descendants of enslaved ancestors—a lineage few can prove,” he continued.

Atty. Taifa expressed her wish for the importance of the right to self-determination be included as part of receiving reparations. That includes people deciding what they want their political destiny to be and people who do not want to stay in the United States, she explained.

The Honorable Elijah Muhammad, the Eternal Leader of the Nation of Islam, taught Black people on the program of separation. In his book “Message to the Blackman,” He laid out 10 points of “What the Muslims Want.”

It continues: “Since we cannot get along with them in peace and equality, after giving them 400 years of our sweat and blood and receiving in return some of the worst treatment human beings have ever experienced, we believe our contributions to this land and the suffering forced upon us by White America, justifies our demand for complete separation in a state or territory of our own.”

The fight for reparations for Blacks in the U.S. has been an ongoing, long, hard fought battle.

A “Pre-Juneteenth Virtual National Rally ‘Why We Can’t Wait: HR-40 On the Move,’ ” was held June 1, where reparations advocates declared Juneteenth—the commemoration of the last day of slavery in the U.S.—Reparations and Racial Justice Day. Participants called for H.R. 40 to be passed by Juneteenth, or June 19. In her Zoom camera, Rep. Sheila Jackson-Lee (D-Texas), sponsor of the bill, held up a white sheet of congressional paper with about 216 co-sponsors.

In January 1989, reparations bill H.R. 40 was introduced by Rep. John Conyers, Jr. (D-Mich.). The legislation would establish a reparations study committee. After the death of Rep. Conyers, Rep. Jackson-Lee reintroduced the bill. It has been sitting for over a year after finally being passed out of the House committee in April 2021.

Yet, the bill has not been brought to the House floor.

“First it was being held up in committee. Now it’s being held up for a floor vote. And every time something happens, they say, ‘Well, we can’t do it now,’ ” Dr. Winbush said.

He stated he heard from a reliable source that Majority Whip Rep. James Clyburn (D-S.C.) could easily bring it to the floor but is reluctant for fear it might hurt the midterms.

“It’s again a matter of justice delayed, that we never are seen as a priority in the American imagination,” Dr. Winbush said.

He explained that H.R. 40 would allow for the kind of study California did, but on a larger scale. “H.R. 40 doesn’t call for reparations. It calls for a study of the impact and remedies of racism on Black people and slavery in this country. In other words, it says what did we do to Black people, how did we do it and what do we do to correct that, to repair that damage,” he said.

Atty. Taifa described the status of H.R. 40 as “absolutely deplorable.”

“That’s why we are calling on President Biden to sign an executive order that brings H.R. 40 into existence so that the commission, which is what’s called for in H.R. 40, can be established and get up to running and do the things that California is doing right now,” she said.

The state of the movement

As the fight for reparations continues, Dr. Winbush described attempts to undermine the movement by the far right and other groups.

“There’s an attempt to undermine the traditional reparations organization in this country, which is N’COBRA, and to move this to lessen the impact of discussing reparations at local, state and federal level,” he said, referring to the National Coalition of Blacks for Reparations in America.

He also feels that the movement for reparations should be at the grassroots level, with the states doing a lot of the work, such as what’s happening in California, in Evanston, Ill., and in Vermont. He would rather see 40 or 50 comprehensive reparations bills passed in the states versus only one, such as H.R. 40, that has been struggling for over 30 years.

Atty. Taifa described the level of momentum that has been built around reparations in the past few years, with the involvement of youth, human rights organizations, churches and other faith groups, the states, city councils and professional athletes and coaches.

“History is being made right now as we speak, and this 500-page report is part of that history. And what we do with this moment, whether we’re going to fulfill what needs to be fulfilled or whether it’s going to be squandered, is going to be very critical for future generations to come,” she said.

“So, I hope that this momentous, historic moment is not squandered, that we fulfill the aspirations of our ancestors and that we let their spirits rest with the reparatory justice that should have gone to them but must come down to us and our future generations at this time.”