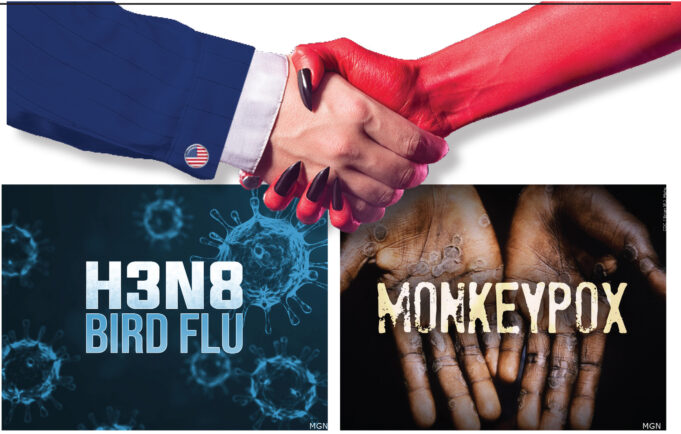 “Before the vaccine was made, I warned us, in the Name of Allah that this was a Death Plot. And before I went there, I told you of a National Security memo by the former Secretary of State Henry Kissinger that they had to kill or cull two to three billion people from the Earth. And Bill Gates and Melinda Gates … the way to get rid of two to three billion people was to offer you a vaccine.” —The Swan Song, February 27, 2022, The Honorable Minister Louis Farrakhan

As the 24-hour news cycle of the COVID pandemic winds down around the world, many people are beginning to examine and analyze what happened to them in the last two years. Suddenly, as if timed to derail this awakening, we are being warned of the possibility of not one, but two new pandemics: bird flu and monkey pox.

In a May 18, 2022, article by Dr. Joseph Mercola: “Will a Weaponized Bird Flu Become the Next Pandemic?” he pointed out: “Natural bird flu is notoriously harmless to humans, but Bill Gates and Dr. Anthony Fauci have, for many years, funded research to develop a bird flu pathogen capable of infecting humans. Some of that research has been undertaken in Pentagon-funded biolabs in Ukraine.

[Bill]Gates funded research by Dr. Yoshihiro Kawaoka, in which the bird flu virus was mixed with the 2009 H1N1 (swine flu) virus, creating an airborne hybrid capable of completely evading the human immune system, effectively rendering humans defenseless against it. The U.S. and other countries have already started stockpiling H5N1 vaccine, and the H5N1 vaccine Audenz is being marketed ‘for 2022.’ As if on cue, the first-ever H5N1- positive case was identified in the U.S. at the end of April 2022.”

But wait! On May 23, 2022 “CDC officials sound the alarm for gay, bisexual men as monkeypox spreads.” Dr. Robert W. Malone was asked, “Is this outbreak of monkey pox a real threat, or is this another case of overstated and weaponized public health messaging?” He responded, “Monkey pox was first identified in 1958 in colonies of monkeys, and the first human case of the virus was identified in 1970 in the Democratic Republic of the Congo…

In my opinion, based on currently available information, Monkeypox is a virus and disease which is endemic in Africa, emerges sporadically after transmission into humans from animal hosts, and is typically spread by close human contact. It is readily controlled by classical public health measures. It does not have a high mortality rate. Unless there has been some genetic alteration, either through evolution or intentional genetic manipulation, it is not a significant biothreat, and has never been considered a high threat pathogen in the past.”

Of course, the Gates/Fauci solution to these possible threats is to bring out the needles and shoot the people up with some new experimental so-called “vaccines.” But we should know by now that the Government of the United States has been involved with developing weaponized “vaccines” for years in an attempt to cull the Earth’s population as expounded in Henry Kissinger’s National Security Memo. The Official Policy of the United States is to Depopulate the Earth by killing billions of people without them ever knowing they are being attacked; thus, they will not fight back against Kissinger, Gates and Schwab and other powerful, Satanic minds.

Kissinger wants to kill all the Original people who are sitting on valuable minerals and resources that white people want. Whereas Gates and Schwab want to reduce the world to a “manageable” population, which they can control like human robots to be their slaves while loving it. The most effective mechanism to accomplish both goals is injecting something inside the people to poison and change their thinking. How can you get billions of people to take these death shots?

In the same way a shepherd uses the sheepdog to bark and bite at the sheep, forcing them into the corral, these sophisticated murders and hoodlums use a “virus” to scare the people to vaccine stations where they submit to mandatory immune system-killing shots. What Satan did not expect was that over 28,000 people in America would quickly die from these shots and their family members would know it was these shots. Satan had hoped that the shots would initially just damage the people’s God-given immune system allowing other pathogens to get in and kill, sterilize, or cause extensive damage over a protracted period of time.

The desire was for the victims to develop symptoms much later; the medical doctors would prescribe Big Pharma’s drugs to ease their pain as they milked them to death in their “Social Credit System” corral like in China. In fact, Klaus Schwab had China’s President Xi Jinping open up the virtual World Economic Forum in January of 2022. Schwab seemed to especially admire how the Chinese Communist Party uses a system of digital currency which issues monetary rewards and punishments based on a massive surveillance system that exerts total economic control of 1.4 billion citizens.

One of Schwab’s apprentices, Justin Trudeau, now the Prime Minister of Canada, a so-called democracy, commented, “There’s a level of admiration I actually have for China. Their basic dictatorship is actually allowing them to turn their economy around on a dime.”

With these cull and control agendas in mind, along with the realization that the people are waking up to their schemes, the criminals are getting desperate. If you remember the James Bond movies, he would start shooting stuff from the tail pipes of his fast-moving get-away vehicle once he had been exposed as a spy.

The people are truly gaining ground on the criminals as evidenced by a May 2, 2022 memo, wherein Indiana’s Attorney General Todd Rokita, responded to a request from the Department of Health and Human Services’ Office of the Surgeon General to submit instances of COVID-19 misinformation. Rokita compiled a list of what he called “misleading messages” spread by various government officials and agencies, including the Centers for Disease Control and Prevention and Dr. Anthony Fauci, director of the National Institute of Allergy and Infectious Diseases.

Rokita highlighted nine instances of what he considered to be COVID-19 Misinformation and False claims the government spread during the pandemic, such as: “Vaccines stop the spread, natural immunity doesn’t help, school closures were effective and costless, there was no reasonable policy alternative to lockdowns, it is possible to eradicate COVID-19, mask mandates are effective in reducing spread, everyone is equally at risk of hospitalization and death from COVID-19, mass testing of asymptomatic people and contract tracing is effective in reducing spread and the reported number of COVID-19 deaths is accurate.”

One can be sure that if the government officials who told these lies were Black, we know what whites would do to them. However, since these are whites lying and poisoning other whites, we will see if they will prosecute each other. White Americans would be wise to stop their government from supporting “gain of function” research and genetic manipulation of God’s creation. In the meantime, it is time for Black people to run to Allah and our own. It is quickly becoming more unsafe to be around white people as their world falls down around them and on us.