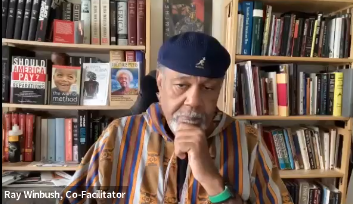 The Nubian Leadership Circle recently had another successful meeting of the minds in a virtual gathering. The quarterly event is an effort to galvanize Black people in America and internationally to discuss matters that will educate, empower, and build stronger, self-sufficient communities.

Staying true to their mission and purpose, the May 7 summit, much like the previous summits, highlighted eight areas of importance called “cadres” (a small group of people specially trained for a particular purpose). These areas were, Spiritual Renewal; Health and Education; Land and Food; Arts and Culture; Family Essence; Economic Development; Communication Technology, and International Advocacy.

Sidiki Kambon, the convener of the summits, told The Final Call, “The goal is to establish Nubian Leadership Circle Summit satellites throughout America and abroad. The aim is to develop a national strategic plan to address the issues and conditions of Black life and ultimately build an independent Black nation that includes all Africans and Black people.”

Marie T. Taqui, an author from Ghana, West Africa, participated in the summit. She stressed the importance of being educated in order to compete economically. “Our people must develop economics and the first step to acquire that aim is to be educated with the knowledge of economics and the principles that produce it. Then we must study and learn from others who are successful and do what they are doing to maintain what we have,” she said.

In the Spiritual Renewal cadre, the husband-and-wife team of Student Minister Rodney Muhammad and Lisa Muhammad from Cambridge, Mass., facilitated the discussion. Even though the session was lightly attended, those who participated were inspired and given useful information to help them navigate through life. The couple shared their experience in the Nation of Islam and how the teachings of the Most Honorable Elijah Muhammad gave them clarity to the reality of God and the need to support one another.

“We as a people must get back to the foundation of who we are and renew our spiritual connection to Allah (God). It is crucial for people to be grounded and in touch with the Supreme Being. Because without God as the center of our lives it becomes a detriment to our survival,” said Student Min. Rodney Muhammad.

“The hand that rocks the cradle rules the world,” added Lisa Muhammad. “So as the women of God, we are the helpmeet to help the man to be a better servant of God and to help guide our children as well,” she said.

Dr. Ray Winbush and Adrian Hickman co-facilitated the Economic Development cadre, where they focused on four areas of interest: systemic White supremacy, building collective wealth, violence against Black people in the world and cyber currency. Nadia Hyppolite, from Haiti, was very passionate about unity and conditions affecting Black people. “We need to keep White people out of our business … our agenda is to get to a point so we won’t need them,” she stressed.

The Honorable Minister Louis Farrakhan of the Nation of Islam supports the National Black Leadership Summit efforts and has addressed the gatherings several times.

The last summit held in November of 2021 ended with a keynote address by the Minister who is a longtime friend and supporter of Mr. Kambon and his vision to form a united Black nation.

“It starts with people like Sadiki Kambon, and all of you that are gathered together for this pursuit of the creation of our own Black Nation,” Min. Farrakhan said in the November message. “But you know there are two things that the enemy does not want us to achieve. The first and most important, yet the most difficult, is the unity of all of us to give us the necessary power to create that nation,” he added. “The second thing after unity is organization,” Min. Farrakhan continued. “Once we are a people organized by our gifts, and skills, and talents, we can achieve anything,” he said.

Mr. Kambon recalled one of his earliest encounters with Min. Farrakhan in 1978 as he began rebuilding the Nation of Islam after the departure of the Most Honorable Elijah Muhammad. Mr. Kambon referred to the Minister as his “longtime friend and brother in the struggle.”

Mr. Kambon and an organization called Black Community Information Inc. in Boston, Massachusetts, had invited Min. Farrakhan to speak. “We were responsible for his security at the time for four days. It was during that short time frame when I gained the utmost respect for his humility and commitment to serving African and Black people in pursuit of our liberation,” said Mr. Kambon.

“Through the years my brother Minister Farrakhan has always been there for me and inspired me to believe in my liberation pursuit for our people is worthwhile and essential,” he added.

Mr. Hampton, Jr. also serves as president and chairman of the Black Panther Party Cubs. “The term leadership and the term role model, when you get down to it has been watered down,” Mr. Hampton told participants.

“We like to use the term ‘real’ models, where we tend to turn the community into classrooms. Where we look forward to building a principal coalition, we being the Black Panther Party Cubs, must be able to have the people’s program … to empower us,” he said.