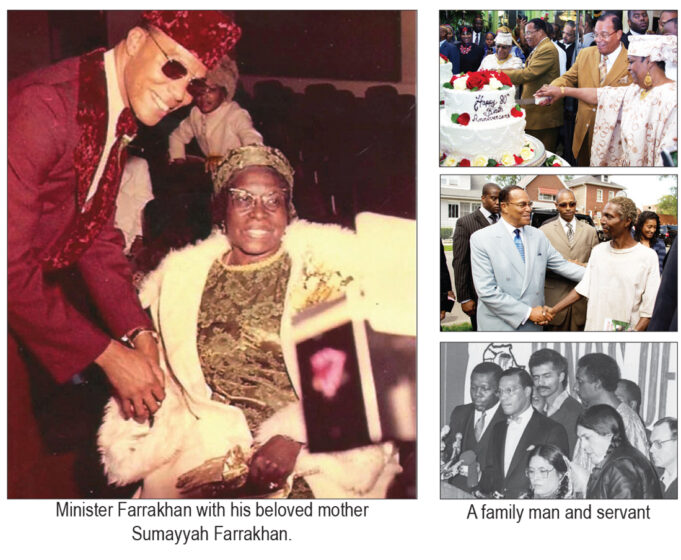 An historical event occurred on May 11, 1933. A gift to the world was born through a strong and caring Caribbean mother, Sarah Mae Clarke, later known as Sumayyah Farrakhan. This gift was the birth of Louis Eugene Walcott, better known as the Honorable Minister Louis Farrakhan.

Student Minister Abdul Akbar Muhammad, longtime companion of Minister Farrakhan and International Representative of the NOI, stated, “I’m honored to be on this line, I thank Allah that He has made the servant of the Most Honorable Elijah Muhammad, the Honorable Minister Louis Farrakhan to be strong at this age, to be clear, and to be found still working.”

He continued, “He is a man that controversy has followed him wherever he went, from Jerusalem to Pakistan, to Uganda. Nelson Mandela wanted to see him, his advisers said don’t see him. Finally, they made a compromise, he would meet Nelson Mandela at his home. He has an unbelievable history, the impact of Minister Farrakhan.”

“We are all so very happy to come together this morning to give thanks to Allah for the Honorable Minister Louis Farrakhan. We commemorate, brothers and sisters, this day May 11, the day that Allah in the Person of Master Fard Muhammad brought forth the Honorable Minister Louis Farrakhan from the womb of his mother, may Allah be pleased, Mother Sumayyah Farrakhan,” stated Student Minister Ishmael Muhammad, National Assistant to Min. Farrakhan.

“We have witnessed and do testify before the world, that the Honorable Minister Louis Farrakhan has done a work never before done in the annals of history. He single-handedly rebuilt the Nation of Islam after its fall and he has reproved the efficacy and veracity of the revelation of our Saviour Master Fard Muhammad to the Honorable Elijah Muhammad, to the entire world,” he added.

“The Minister has suffered and endured much, he has been kind and patient and fore bearing. He has suffered the abuse of the enemy, and the vehement opposition against him, against Elijah Muhammad and this teaching, but he never backed down or wavered in these 44 years absent his teacher,” stated Student Min. Ishmael Muhammad.

Following such reverent words, Student Imam Sultan Rahman Muhammad led the Fajr prayer, which is the first prayer of the day and performed before dawn.

Many people were moved by the program and shared how Min. Farrakhan has personally impacted their lives through his exemplary example as a student of the Hon. Elijah Muhammad.

“As I listened to the prayer feeling joy and peace, I was thinking of the many wonderful pearls of wisdom he has gifted to us. By Allah’s grace and wisdom, we have life given to us by two divinely selected human beings, a conduit to the will of Allah’s path of light. I can only imagine all of the positive power and love sent to our beloved Minister. Words cannot exhaust the greatness of his works,” Joanne Muhammad told The Final Call.

All over social media, well-wishes were shared by Muslims and non-Muslims for a special man and divine servant who has impacted and influenced the lives of so many.

Min. Farrakhan expressed how overjoyed and thankful he was for the birth anniversary prayer given in his honor.

“Words are inadequate to say ‘thank you’ for the best birth anniversary that I have ever had since I have been in this world, that my brothers, my sisters, my companions in struggle, my friends, fellow laborers, the Believing community would offer prayers of thanksgiving for me. And I thank you and I offer to Allah, the Most High, a prayer of thanksgiving for each and every one of you,” the Minister stated.

“There is no greater gift that you could give to me on this day, you have done it. You have made this day the best day of my life. I pray that Allah would bestow on the Executive Council and all the laborers of Islam greater knowledge, greater wisdom, greater understanding that together we may put to a perpetual flight Satan and all of those who accompany him, and may He place Satan in the hell that he has earned for himself, and may He place us on raised couches dressed in beautiful garments, surrounded by beautiful youth never altering in age,” he continued.

“May He grant us that kind of life that He promised, that we would be in a complete state of peace. No vain words will be heard in our community, just ‘peace, peace, peace.’ To all of you who have given any degree of support, we thank you. To those who are battling Satan, as we all are, may He (Allah) bless those of us who have gotten a little tired, a little weakened, as the Messenger said to me, ‘some will get right to the door and turn back,’ ” he said, referring to the Hon. Elijah Muhammad.

“I pray that all of you will see the Hereafter, and that in your personal lives Allah’s peace will prevail and that we will iron out all differences among us and get ready for Allah to take us through the most difficult days that any people have ever had to endure. Allah says in the Qur’an, ‘If He punished us for our sins, not one soul would remain on the earth.’ We thank Him so much for His mercy, and His forgiveness. The scripture says, ‘Were it not for His elect sake that these days of chastisement were shortened, no soul would be left alive,’ ” the Minister continued.

“Thank all of you who made this morning so beautiful for me. May Allah bless you and your families, and may all of us see the Hereafterthat we have been promised. Ameen,” the Minister concluded.

(Upon entry into the Nation of Islam, the former names of our slavemasters are given up as we are no longer their possession but are a free and independent people. Shawntell Muhammad can be contacted at [email protected])