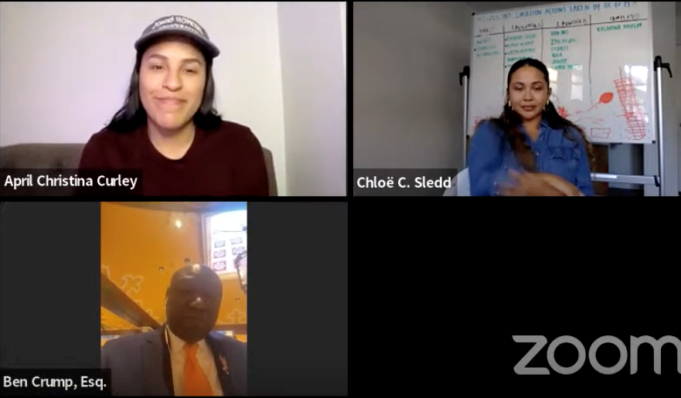 The show also featured April Curley and Chloe Sledd who spoke on the class action lawsuit they have filed against technology behemoth Google.

“[We have] filed a class action lawsuit based on the discrimination of minorities and specifically Black people and specifically women of color and we are asking for class status against one of the largest corporations in the world. These Black women have the right to never be disrespected by anybody. We don’t care about their size and their might,” stated Atty. Crump.

“We go to Goliath, and we say we’re coming with this lawsuit with seven smooth stones. Let’s go!” he proclaimed.

The lawsuit alleges a pattern of racial discrimination against Black and minority employees.

In what was to be her dream job, Ms. Curley was recruited by Google in 2014 to work in their diversity initiative to recruit graduates from Historically Black Colleges and Universities (HBCU’s) into technical roles. At the time, Google had not recruited one single Black student from an HBCU.

Ms. Curley explained the corporation provided her with documents based on a little bit of research they said they had conducted on what “we think happens at HBCU’s and why we haven’t hired anyone.” She added that they looked at Howard University and decided the curriculum wasn’t strong enough and “the students weren’t prepared enough to actually get a job at Google.”

While Ms. Curley aggressively recruited HBCU students, she discovered that inherent in the process were racist and biased internal policies in place to keep Black students out of their talent pipeline. She shared how resume screeners would “throw out the resumes of students that came from an HBCU because they were unfamiliar with the school name.” Students from HBCU’s also got harder interview questions just to throw them off.  She often had to require the students to be re-interviewed properly, which usually lead to their hiring.

Ms. Curley revealed that Google had in place an arbitrary hiring metric called being “googly,” which basically measured the degree to which the interviewers felt that applicants would be able to fit in and assimilate into the Google culture and Silicon Valley.

“My students would often be flagged as not ‘googly’ enough or they wouldn’t be a good fit. The interviewer wouldn’t want to ‘grab a beer’ with this student because they didn’t fit in, so they were rejected,” she explained.

She soon found that instead of being rewarded for what she was hired to do, she was retaliated against. “I was never promoted. I never got a raise in six years, even though I brought in, single-handedly, over 500 Black and Brown students that were hired into technical roles from HBCU’s and I was never once rewarded and ultimately terminated for raising my voice against those things,” said Ms. Curley.

Elevated Places co-host Terence Muhammad pointed out that with over 100 HBCU’s, Google is not just saying they’re not qualified, “it’s that we don’t want you.”  He added, “it’s a telltale story of how they still see us as inadequate or lower or lesser than, even though we can do our own.”

Legal contributor Atty. Pamela Muhammad raised a similar point during the April 7 show. “If you don’t meet their value, you’re excluded. My point is, if they are using technology sometimes to disenfranchise Black people, do they really want the Black minds at the table to make sure that values are expanded to include this diversity?” she asked.

Chloe Sledd started working with Google after successfully completing an internship with them when they were on her campus at Howard University, recruiting business students.

Within her first week after orientation, she states she experienced sexual harassment from a White, male co-worker on her floor, which also included him sending sexually explicit messages via company chat. She reported him to her manager, human resources and a friend in management and was “basically told, get over it and not put him through any unnecessary machinations or pain based on what I was feeling,” she said.

After no resolution, Ms. Sledd moved to another area and looked forward to things getting better.

However, after Mike Brown was killed by Ferguson, Mo., police in 2014, she was traumatized, as her own father was permanently handicapped after being shot 12 times by Chicago police. She implored Google leaders to do something.

“This is a company that’s literally everywhere. It’s in every neighborhood, every school, and every single person—not only in this country, but around the world—uses this search engine. And so, because of that a lot of communities who are users are being affected by these issues, but Google just didn’t seem to care. So, I tried to do something around it. I shared my ideas with the founders, Larry and Sergey, at a company audience and the backlash from doing that was so severe that I ended up just quitting,” Ms. Sledd said.

Atty. Crump said since the filing of the lawsuit in mid-March that 11 more people from Google have come forward with allegations and complaints.  At a press conference in San Francisco reported by several media outlets, Atty. Crump announced there is currently an investigation underway by the California Dept. of Employment and Fair Housing, stemming from what he described as “the many allegations made by Black women who were employed by Google.”

“I think it was very wise strategically to file a class action suit,” said Student Min. Ava Muhammad during the Elevated Places broadcast.

“If you notice, earlier this year, well the end of last year, Brian Flores, the former head coach of the Miami Dolphins, who is Black and he filed a major case against the NFL, against the Dolphins. But he also filed a class action suit and I like that because it’s time for us to have some unity and step out here together. This picking us off one at a time guarantees our failure,” she noted.

Elevated Places can be heard weekly every Thursday at 7:00 p.m. Central on www.blogtalkradio.com/elevatedplaces. The April 7 program can be viewed on the Elevated Places Network YouTube Channel.