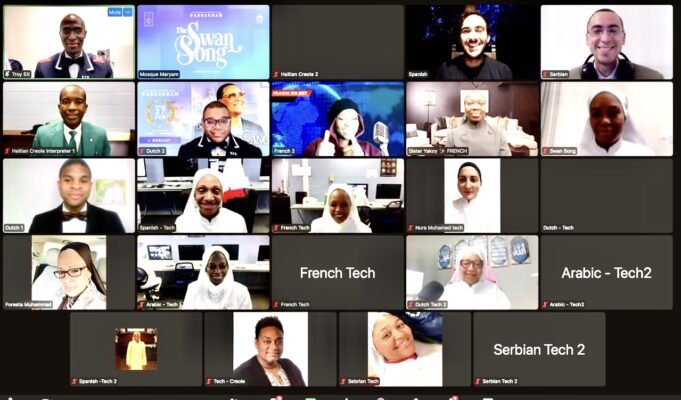 There is no denying that history was made Saviours’ Day 2022. The Honorable Minister Louis Farrakhan professed nearly five hours of life-altering words, as the thousands of people who poured onto the grounds of Mosque Maryam in Chicago, listened attentively. The monumental address titled, “The Swan Song,” was delivered in English, and it crisscrossed the world, impacting the lives of those who heard it.

But another piece of history on that day allowed millions of people who did not speak English to still be able to hear and understand his words. It was all thanks to an obstacle-filled effort that was made successful by a group of hard-working and dedicated people, committed to helping Min. Farrakhan reach as many people as possible.

When things don’t go as planned

Making this happen was not the easiest thing to do and was pulled off by overcoming a part of the plan that ended up falling through. It all began with a phone call.

The Ministry of Information is one of the Nine Ministries established by Min. Farrakhan to help in the ongoing efforts to build a better and safer community.

After the call was made, the research began. One of the people called in to assist in finding a translation company was Ademah Muhammad, Saviours’ Day director for The Nation of Islam. With his experience in working in network news on a national and international scope, he knew what to look for in a good translation company. But one qualification was of utmost importance.

“Most of the translation companies now, you hear a translator, but the voice of the person [speaking] goes away,” Ademah Muhammad said. “We didn’t want that. That’s unacceptable. You want to hear the spirit of the Minister.”

During his search for companies, something else came to his attention. “I had heard and we knew that they were doing translations in the European Region,” he said.

At that point, the plan shifted to use the translation company, but also include translators from the European Region of the Nation of Islam, so that the message could be translated into as many different languages as possible. About a week before Saviours’ Day, they had secured a translation company. But then, the company threw them a curveball.

“The week of, they actually decided for whatever reasons that they weren’t going to be able to do it,” Troy 5X said. “So, we’re like, ‘well, we’re gonna have to figure it out.’ ”

That’s when the race kicked off to fulfill the desire of Min. Farrakhan in just a matter of days.

Pulling together an historic operation

The next step was to see which individuals the European Region had available to translate and into what languages, explained Troy 5X. Another step was pulling the eight-member tech team into the mix, which primarily consisted of MGT & GCC (Muslim Girls Training and General Civilization Class) who are the women of the Nation of Islam.

Although the Nation of Islam is no stranger to translating lectures, it had simply not been done at this magnitude.

“None of us had been involved in a process where six languages were being translated, and definitely none of us had been in this type of situation where we were doing it for the Honorable Minister Louis Farrakhan and for such a big event,” Troy 5X explained.

Accommodating time zones proved to be a challenge. Meetings consisted of late nights and early mornings for those who lived in the U.S., since many of the translators who lived in Europe were several hours ahead.

Another obstacle? Trying to figure out the technical aspect of accomplishing what needed to be done.

“There was one day where we were on for hours and hours, just trying to troubleshoot,” said Chandra Muhammad, the tech team’s manager. “The obstacles prior to the day of was just making sure that everyone was there, everyone could be heard, everyone was clear,” she added.

The operation wasn’t only about the translations, but also getting the largest reach possible. The video conferencing platform Zoom was used to host all the translators, but that Zoom meeting was also live streamed onto various social media platforms to increase the amount of people reached. Using Zoom proved to be useful, because when many live streams of the Saviours’ Day message went down on Sunday, February 27, the Zoom platform never did.

Most of the 10 translators included registered members of the Nation of Islam. Two translators, one for Spanish and one for Arabic, were not registered. There was only one translator respectively for the languages of Arabic and Spanish, so they translated Min. Farrakhan’s words for the entire lecture. The message was also translated from French into Malagasy, the national language of Madagascar, through a different Zoom meeting.

Chandra Muhammad said they didn’t only translate the words of Min. Farrakhan, but also his spirit

“Brother Makhandal was so fired up, the Spanish translator … you could hear him getting fired up. Some of the French translators you could hear their voice and them really getting into it,” she said. Joseph Makhandal Muhammad serves as the Nation of Islam’s representative to Haiti.

Troy 5X said having someone who loves Min. Farrakhan translating his words makes all the difference.

“I wasn’t in the room with them, but there were others that were in the room—part of the tech team—working, and they said as the Minister was speaking, [Brother Makhandal] would stand up,” he said. “He was in the spirit of the Minister. So even in his presentation, even though no one could see him, the energy that the Minister was giving in English, he tried to echo that and mirror that in Haitian Creole, and I believe that was the case with all of those who were translating.”

Makhandal Muhammad says translating during “The Swan Song” was an impactful experience.

“The beautiful thing is to hear our brothers and sisters in Haiti repeating some of the words of the Minister, and I know they were not listening to it in English,” he said. “I feel that the work was done to a great extent because the Minister’s goal was to have as many people as possible on this planet to hear ‘The Swan Song’ and that message itself was very powerful.”

Yakoy Syallo X lives in Paris, France, and was a French translator on that day. She says it was an honor to be part of the effort.

“I feel blessed, privileged and honored to be able to translate each word of the Honorable Minister Louis Farrakhan,” she said. “My desire is to make the message of resurrection from him accessible to as many people as possible, particularly to African and Afro-descendant populations.”

Unifying to spread a universal message

Troy 5X said this experience has proven the Nation of Islam has everything it needs to be successful.

“Our challenge as a Nation isn’t a lack of having the human capital or the skill set or the knowledge to do things. But our challenge is our unity and being able to identify people and bring them together in a way in which they can work together to meet and overcome whatever obstacles there are. I think that this was definitely a demonstration of that,” he said.

Ademah Muhammad said, this was the first time the U.S. had connected with the European Region to do translations.

“We were able to for the first time that I know … merge our European component with America and have it done at a certain level,” he said. “We were able to come under one umbrella. If the Minister wants unity amongst us and he does, then I would not accept letting Europe do theirs and we do ours. Oh, heck no!”

Makhandal Muhammad says with all the languages included, this speaks to the universal message of the Most Honorable Elijah Muhammad and the Honorable Minister Louis Farrakhan.

“We know that [‘The Swan Song’] was not just for us in America or English-speaking Black people. It was really for humanity,” he said.

“Humanity was a target for this message. And so, it would be a matter of time for this teaching to be translated into those many languages that our people speak, and that humanity also speaks because the message is for humanity.”