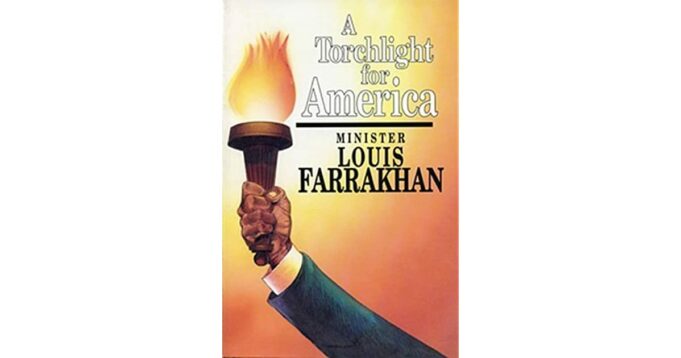 A vision for the Nation of Islam and America is found in every utterance and written word from the Most Honorable Elijah Muhammad and the Honorable Minister Louis Farrakhan. Their mouths and pens were not made to speak or write idle words. America is unraveling because she rejected guidance from the modern-day Moses and Aaron.

“A Torchlight for America” and Unraveling of a Great Nation have a double meaning relating to our budding nation. Only our obedience and righteousness will sustain us and keep our nation from unraveling.

Let us recount some of the history. During the early nineties, the Minister and the Nation of Islam were under blistering attacks from members of the Jewish community and the corporate media. In October of 1992, the year before Torchlight was published, the Minister delivered the address A Torchlight for America at the Georgia Dome before an audience of 55,000— outdrawing the Atlanta Braves’ opening game of the World Series.

In addition, as the Minister was touring the country attempting to stop the street organizations from killing each other over drug turfs, Warner Brothers and director Spike Lee released the Malcolm X film to counter the influence of the Minister among the youth. The Department of Housing and Community Development canceled the Nation of Islam security contracts due to pressure from the ADL. Black leadership was pressured to disinvite the Minister from the 30th Anniversary of the March on Washington.

Attempts by Black leadership and organizations to form a “covenant” relationship for operational unity was sabotaged from without and within. The Minister’s offering of a gift of music in Mendelssohn’s violin concerto on his 60th birth anniversary and the publication of “A Torchlight for America,” was purposely misrepresented to have us inside and outside the Mosque to question whether the National Representative had “changed direction” and “gone soft” on the enemy.

This misjudgment of the Minister’s motives is caused by the blindness of those who do not understand the heart of a redeemer. Would not a redeemer be found saving Black youth from the genocidal plot of the American government? Defending the Nation of Islam from external attacks? Protecting the Nation of Islam from the negative consequences of the misjudgment of shortsighted disciples?

Uniting with cadres of Black leadership and organizations despite their being beholden to corporate and Jewish philanthropy or ideologically aligned with the Nation but skeptical of the Minister’s motives or envious of his popularity? Traveling to Gabon, West Africa, to address the African, African-American Summit to offer an international vision of a united Black Africa and Black America, while offering America a “torchlight” to escape or mitigate the consequences of her evil deeds?

Without truly grasping the heart and spirit of the redeemer in our midst, we disqualify ourselves from apostleship and face an unraveling as a nation.

“In Closing the Gap,” the Minister responded to Brother Jabril Muhammad’s question about the book stating, “A Torchlight for America is a gentle word that offers solutions to the many, many problems that America is facing, that Black people are facing and in some cases, that the world is facing, so that he, Pharoah-the government of America-might say, ‘Well wait a minute. There is utility in this people and perhaps we’ll put this plan of destruction for them on hold.’ And that’s my motive.”

Whether America or our nation heeds or ignores the torchlight rests not on the shoulders of the redeemer. Again, please pull “A Torchlight for America” down from your bookshelves and reread it. America may unravel but Allah’s nation shall never fall again.

Dr. Abdul Haleem Muhammad is Southwest Regional Minister of the Nation of Islam and Student Minister of Mosque No. 45 in Houston.