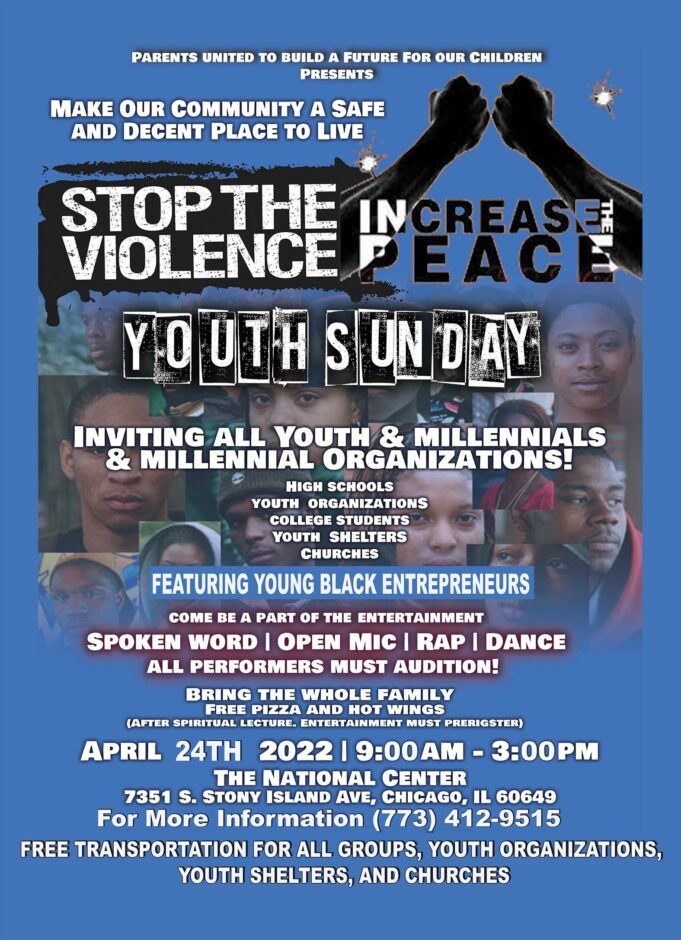 CHICAGO—Young people from Chicago and the surrounding areas are invited to attend a special gathering tailored just for them. Parents United to Build a Future for Our Children is presenting a “Stop the Violence, Increase the Peace” youth event on Sunday, April 24, at The National Center, headquarters of the Nation of Islam.

Heeding the directive of the Honorable Minister Louis Farrakhan to “make our community a safe and decent place to live,” Sondra Muhammad of Chicago spearheads the organization, Parents United to Build a Future for Our Children.

Since 2001, the organization has hosted Stop the Violence, Increase the Peace Youth Sundays, annually held at the National Center of the Nation of Islam at Mosque Maryam.

“Growing up, my parents, who were not registered members of the Nation of Islam, always went to hear the Most Honorable Elijah Muhammad. They would come home and share with myself and siblings what was said. Hearing and seeing how much my mother praised the Most Honorable Elijah Muhammad instilled a desire inside of me to join the Nation of Islam once I became an adult,” she said.

“I’m inspired to present these teachings of the Nation of Islam to our community, the youth in particular, because they helped me become the adult that I am by having that foundation of learning knowledge of self. The children have a right to hear who they are because they will benefit from these teachings,” she added.

The next event will be held on Sunday, April 24, from 9:00 a.m. – 3:00 p.m. at 7351 South Stony Island Ave. Attendees will be presented with a powerful spiritual message delivered by Student Minister Ishmael Muhammad, National Assistant to Min. Farrakhan. Following the message, youth entrepreneurs will have an opportunity to network. All youth organizations, youth shelters, high schools, and churches are invited to participate, said Sondra Muhammad.

Also included in the program will be spoken word, dance, open mic, and rap. Free food and transportation will be provided.

For more information and to arrange for transportation, call 773-412-9515.—Shawntell Muhammad