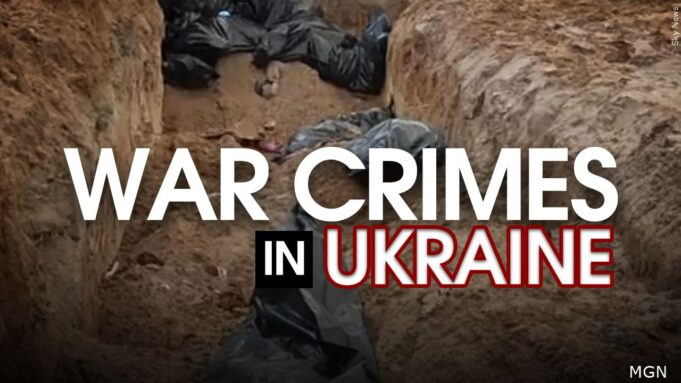 War in Eastern Europe between the Russian Federation and the United States and NATO-backed Ukraine is showing no signs of ending. On the contrary, fierce fighting has flared up in Kharkiv, Ukraine’s second largest city, and the disputed Dombas region near Russia’s border.

An April 8 rocket attack at a railway station crowded with people fleeing threats of a major Russian offensive in the country’s East killed dozens of people including children, and injured dozens more. The battles followed heavy fighting in Ukraine’s capital Kyiv and nearby areas where horrifying footage of desolation and death was displayed by world media after Russian forces retreated earlier in the month.

Dead bodies laid in the ruins of Bucha and other destroyed suburbs of Ukraine’s capital. For many, the streets, bombed out structures and mass graves became their graveyards. Graphic images showed corpses with tied hands, bullet wounds, and signs of torture that sparked global outrage and war crime accusations against Moscow.

Russian officials pushed back and rejected the footage as fabricated and called the accusations “another provocation” by Ukraine.

“Photos and video materials published by the Kiev regime allegedly testifying to some ‘crimes’ committed by Russian soldiers in the town of Bucha, Kiev region, is another provocation,” Moscow’s Defense Ministry said.

Anatoly Antonov, the Russian ambassador to the U.S. told Newsweek, Russia completely withdrew from the city as early as March 30, questioning the timing of the claims.

“All these days, the Ukrainian authorities have been remaining silent and now they suddenly show up with some sensational photos with a view to denigrating Russia and making our country give explanations,” said Mr.  Antonov.

Separately, a video circulated online and validated by the New York Times appeared to show Ukrainian forces killing what is believed to be a captured Russian soldier outside a village west of Kyiv. The act would constitute a war crime if true. Ukraine’s government told media it is investigating the act.

The claims and counterclaims are being played out on the battlefield and in Western capitals and the halls of international bodies like the UN, NATO, and the European Union.

She described it as the “first kind of horrific, genocidal campaign” seen in recent decades. The lawmaker  said America should supply more advanced weaponry being requested by Ukraine and called on Western European nations to impose oil and gas embargoes on Russia despite the economic hardships involved.

“They need to understand that every single time, every single day that they are continuing to import Russian oil and gas, they’re funding Putin’s genocide in Ukraine,” Rep. Cheney said.

Ukrainian, U.S., and Western leaders accused Moscow of committing war crimes and in a unified chorus of rebuke, suspended Russia from the UN Human Rights Council on April 7.

The Rights Council recently announced a commission of inquiry to investigate abuses. The International Criminal Court (ICC) prosecutor also launched a probe into atrocities, although Ukraine nor Russia are members of the Hague-based ICC.

The United Nations General Assembly voted on April 7 to oust Russia from the Human Rights Council following the reports on alleged war crime violations. A required two-thirds majority of the 193-member Assembly was achieved with 93 nations in favor and 24 against. A total of 58 nations abstained from the process.

“This is an important and historic moment,” said Linda Thomas-Greenfield, the U.S. ambassador to the UN.

The world was looking to see if the UN would be a “safe haven for human rights abusers” or live up to the ideals of its charter, she told the assembly after the vote.

“We ensured a persistent and egregious human rights violator will not be allowed to occupy a position of leadership on human rights at the UN,” Ms. Thomas-Greenfeld added.

Days earlier, President Joe Biden blamed Russian President Vladimir Putin personally for the atrocities and said he should be tried for war crimes.

“He is a war criminal. But we have to gather the information,” Mr. Biden said April 5. “We have to gather all the detail, so this can be an actual … war crime trial,” he said.

But Mr. Biden throwing shade on Mr. Putin as a war criminal is the proverbial “pot calling the kettle mettle,” argue observers.

“It is the height of hypocrisy,” said Lennox Hines, professor emeritus at Rutgers University.

Mr. Hines said it’s hypocritical for America to point fingers at Russia, while guilty of illegal aggression in Iraq, the 20-year war in Afghanistan, toppling the government of Libya, and its invasion of Grenada. He told The Final Call he is opposed to Russia’s invasion of another sovereign nation; however, the credibility of the U.S. is called to question.

Mr. Hines pointed out it is duplicitous for the U.S. to instigate accountability of Russia, while it “insulated itself against being charged and tried” before any international tribunal.

The U.S. never signed on the Rome Statute of the ICC to accept being subjected to the jurisdiction of the International Court. America as the strongest military and economic power holds tremendous influence on her Western counterparts and the world stage. It signed agreements with many nations threatening if they were to bring charges against the U.S., it would retaliate against them economically.

“So, I say there is a duplicity and a hypocrisy by the United States in this regard,” said Mr. Hines.

Unless a country submitted itself to the jurisdiction of the ICC by agreeing and signing the Rome Statute, that country cannot be brought before the International Criminal Court.

For others the war in Eastern Europe highlights the unraveling of White world power on the earth.

Earlier this year the Honorable Minister Louis Farrakhan of the Nation of Islam placed the turmoil in a scriptural context and warned it is a prelude to a wider war to end all wars.

“The Messenger said Europe will be one of the worst war areas of all the world,” Minister Farrakhan said, quoting his teacher the Most Honorable Elijah Muhammad.

“When you start going away, the Messenger said, ‘you go away by the tens of thousands to fight… but you’ll come back by the fives and tens,’” said Minister Farrakhan.

“You can’t win another war. Russia this will be your undoing too. See, all White power has to end. The kingdom of God has to be established,” he stated in a February 27 message called “The Swan Song.”

The uproar in Europe has brought in the armies of White Western world powers whose hands, including Russia’s, are stained with a history of bloodshed.

In a previous message on Armageddon delivered several years ago, Minister Farrakhan raised the question, can the war be averted?

“This most destructive of all wars is at hand. In fact, we have entered into the door of this great cataclysmic war that will take down almost all of the human family of the earth,” he warned.

“In fact, this time period is prophesied to bring about such destruction, that it is written in the Bible that if these days were not shortened for God’s elect sake, no soul would be left alive on earth,” said Minister Farrakhan.

“White rule was possible because God permitted this,” said Ava Muhammad, Student National Spokesperson for the Nation of Islam and Minister Farrakhan.

Student Minister Muhammad explained that the European’s history in the 20th and 21st century confirms the teachings of Elijah Muhammad. “We are taught by the Honorable Elijah Muhammad that the Caucasian people … were given a 6,000-year period to dominate the earth,” said the attorney and author. That period ended in 1914 marked by World War I.

Student Min. Ava Muhammad explained that World War I represented an “implosion of their world” where they went to war against one another over the earth’s resources in Africa, Asia, and the Middle East. America along with Great Britain emerged as the dominant powers. Throughout the 20th century there were many wars, including a second World War.

“There hasn’t been a time that somebody wasn’t at war or fighting on this planet since the Caucasian has been here,” Student Minister Muhammad stated. “They are by nature, a warlike people,” she added.

For the alleged atrocities in Ukraine, America, the EU and the United Kingdom stiffened sanctions on Russian banks. America prohibited Russian assets from going through the U.S. financial system and barred Americans from doing business with Sberbank and Alfa Banks, Russia’s two largest banks.

America gave $1.7 billion in military aid since the start of the invasion, and $2.4 billion since the beginning of the Biden administration. Days before, the administration approved a $300 million military package.

Meanwhile foreign ministers of NATO states met April 6 and 7 in Brussels. At the meeting NATO marshalled nonmember Asia-Pacific nations—Australia, Japan, New Zealand and South Korea—around what is being expected as a lengthy war with wider implications.

As fighting escalates, leaders are expecting a long war. NATO Secretary General Jens Stoltenberg warned war is entering a “dangerous” new phase and expects greater intensity in coming days. “Therefore, we need to also be prepared for the long haul,” he said.

“It’s hard to predict. Wars are always unpredictable. But this can last for months and even years,” he said.

Meanwhile, American defense heads told the House Armed Services Committee that global stability is unraveling and the “potential for significant international conflict is increasing, not decreasing.”

As America is paying for Ukraine’s defense overseas, her own citizens are breaking under the effects of the Covid-19 policies, vaccinations, inflation killing them at the gas pump, and doubling food prices.

While the American people suffer, somehow the United States has $100 million to send over to Ukraine for weapons, not to feed children, but for weapons, argue critics.

“And this is why this has to end … if peace is to exist on Earth, then we can’t be dominated by a people whose nature is to fight, whose nature is greed,” said Student Minister Ava Muhammad.