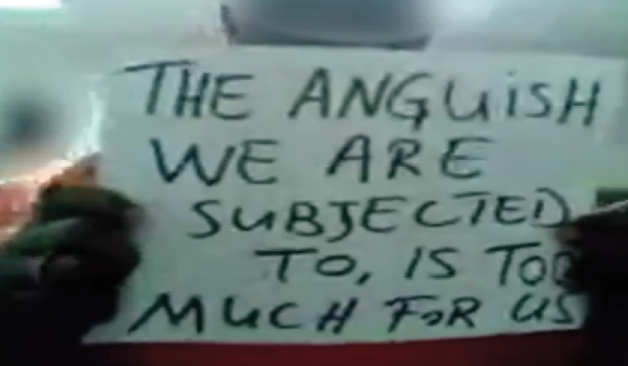 (GIN)—As the U.S. prepares to welcome tens of thousands of Ukrainians fleeing war, scores of African and Caribbean refugees are being sent back to unstable and violent homelands where they face rape, torture, arbitrary arrest and other abuses.

“They do not care about a Black man,” said Wilfred Tebah, a leading member of the Cameroon American Council, recounting his effort to find asylum in the U.S.

“There are a lot of Cameroonians in the U.S., and some are still in detention or stuck at the border,” said Tebah. “If I am deported, I will be held in prison, tortured and even killed … I’m very scared. As a human, my life matters, too.”

Tebah now lives in Columbus, Ohio. He escaped from Cameroon where English-speakers are targets of persecution by the French-speaking government in what has been called “the Anglophone crisis.”

Many have been killed and over a million displaced during what has become a war of secession by the English-speakers.

The advocacy group Human Rights Watch (HRW) in a February report listed the dangers Cameroonians face if unable to be cleared to enter the U.S.

The list includes arbitrary arrest and detention, torture, rape, extortion, confiscation of their national IDs, and abuses against their relatives.

“Many also reported medical neglect and other mistreatment while in custody in the U.S.,” wrote HRW in their 149-page report titled “Deported to Harm in Cameroon.”

Lauren Seibert, refugee researcher at HRW, faulted the U.S. government for sending back Cameroonians with credible asylum claims, as well as mistreating already traumatized people before and during deportation.

A month ago, President Joe Biden said the U.S. would welcome 100,000 Ukrainian refugees, granting Temporary Protected Status (TPS) to another 30,000 already in the U.S.

But while Ukrainians fleeing the war are met with emotional displays of solidarity, asylum seekers of color are left to wait in Mexico, in detention centers or back at home.

Dept. of Homeland Security Secretary Alejandro Mayorkas said the agency is reviewing TPS for Cameroonians and other African nationals. TPS provides a work permit for six to 18 months

Lisa Parisio, who helped launch Catholics Against Racism in Immigration, argues the TPS program could easily help protect millions more refugees fleeing danger but has historically been underused and over-politicized.

Bias against people of color can also be seen in Western news reports posted to Twitter. “This isn’t Iraq or Afghanistan,” wrote CBS foreign correspondent Charlie D’Agata. “This is a relatively civilized, relatively European city.” Ukraine’s Deputy Chief Prosecutor, David Sakvarelidze said: “It’s very emotional for me because I see European people with blue eyes and blonde hair being killed.”

Meanwhile, Korrine Sky, 26, from Zimbabwe, a student of medicine in the eastern city of Dnipro when Russia invaded Ukraine, has been raising money to help Africans in need through Black Women for Black Lives and gofundme.