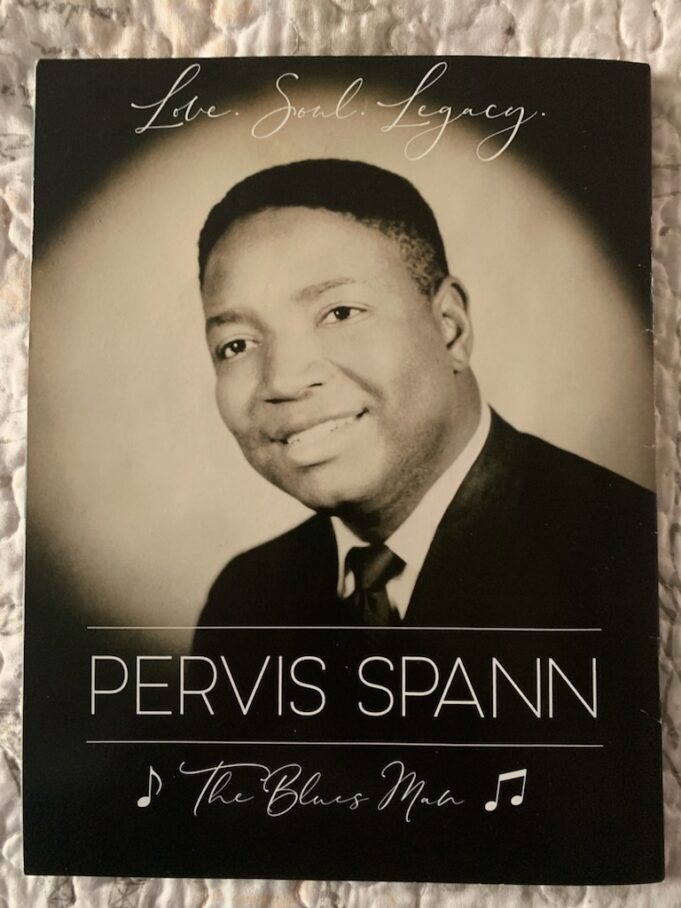 CHICAGO–Legendary WVON-1690AM media personality and business icon, Pervis Spann, who excelled by taking the Blues and Soul music of the ‘60s and ‘70s and applying the business ethics of the Deep South died at his South Side home from complications of Alzheimer’s disease. He was 89 years old.

Although recognized over the airwaves for his humor, melodious voice, and concerts, it was his courage, love of family and business acumen that are the foundation of his legacy, his family and friends recalled during his homegoing service.

Born in Itta Bena, Mississippi, in 1932, Spann, known for decades as “The Blues Man,” came to Chicago during the “great migration” era. After bouncing around in various jobs, he found his lane as an artist manager, concert promoter, nightclub owner and eventually as a key architect of Black radio and advocate for social justice.

Spann’s entry into the entertainment industry began at age 14, as the manager of the Dixie Theater, a local all-Black theater. But before his illustrious media and business career would evolve, Spann enlisted in the Army toward the end of the Korean War. Afterwards, he came to Chicago where he drove a taxi and attended an electrical school, he boxed, and even was a photographer.

Inspired by the disc jockeys in the town, he began to see an opportunity for himself in broadcasting. Taking advantage of his benefits as a veteran, he attended the Midway Television Institute and the Midwestern Broadcasting School.

Spann’s entry into radio began with a 15-minute show, six days a week on the McKey All Night Roundup on WOPA in Oak Park which turned into a four-hour overnight show.

Spann kept artists such as B.B. King, Howlin’ Wolf, Muddy Waters, John Lee Hooker, Etta James, Koko Taylor, and Ray Charles in heavy rotation. He played the music and talked about both the Blues music and the primary themes of the Blues music such as broken hearts, new love, lost love, hard times.

Capitalizing on his popularity, Spann began managing and promoting artists. It was in Chicago at the famed Regal Theater where Spann crowned Aretha Franklin, “Queen of Soul” and on that same stage, he anointed Blues performer B.B. King, the “King of the Blues.” He even co-managed the Jackson 5 with their father, Joe Jackson. Their first Chicago performance was at a nightclub owned by Spann called the Burning Spear Club.

“What made Pervis so unusual is that he never lost his basic commitment to his community. He never compromised who he was,” said Rev. Sharpton who spoke at the homegoing service March 23. Spann died March 14.

Before it was popular, Spann supported Rev. Dr. Martin Luther King Jr.’s civil rights efforts in Chicago. He did an on-air 87-hour “sleepless sit-in,” raising money for Dr. King. “He didn’t just do the artist thing. He was here when we came here with Dr. King,” said WVON radio personality, civil rights activist and former alderwoman Dorothy Tillman. “When other people was running,” she added.

In 1975, WVON was sold, “the Good Guys” were fired, and the station changed frequency. In 1979, Spann joined forces with Vernon Jarrett and Wesley South and bought the license to the original frequency. Listeners to the new station, WXOL, heard an all-Blues format and many of the same voices from the old WVON and then, the station reclaimed the old call letters in 1983.

In the 1980s, Spann expanded and bought WXSS in Memphis. Eventually, he also owned radio stations in Atlanta, Georgia and Jacksonville, Florida.

WVON became the essence of talk radio. It was and still is a place where the community can discuss topics, personalities, and issues of the day. Conversations about every aspect of the Black experience were and are part of the nightly listening.

One frequent guest of WVON studios over the past three decades is the Honorable Minister Louis Farrakhan of the Nation of Islam. The Minister has often recognized WVON-1690AM as one of the last of the great talk radio stations historically used to inform and educate the Black community. The interviews on WVON with Min. Farrakhan and former talk show host Cliff Kelley of the Cliff Kelley Show are legendary, one lasting three hours.

“He gave voice to the program of the Honorable Elijah Muhammad that was being presented by the Minister at a time when we weren’t welcome on a lot of different formats,” said Leonard Muhammad, an aide to the Minister and Nation of Islam official. “One of the most noteworthy things was his allowing WVON to kind of be the epic center for the Million Man March and the information that was going out to people throughout the country between him and Cliff Kelley,” said Mr. Muhammad, referring to the historic 1995 gathering of nearly two million Black men to Washington, D.C.

“We would not have been able to use Brother Cliff if it wasn’t for the fact that he was there at WVON. So, the Minister told me before I came that he would always be grateful to Pervis because he laid a base here and gave voice to Black people, particularly, not just to politicians and Christian pastors, but to the nationalist as well as the Nation of Islam. Everybody had a voice at WVON,” said Mr. Muhammad.

“He is what scholars would call a race man … that’s somebody who just says ‘What’s in it for us. How will it benefit us? How will our community thrive?’ We are the beneficiaries of Pervis Spann,” said Rev. Otis Moss III of Trinity United Church of Christ who gave the eulogy at Spann’s homegoing.

“We need to make sure that in the Chicago Public Schools that they are talking about the history of Chicago that WVON and Pervis Spann is included,” he added.

WVON, from the beginning, supported then-Congressman Harold Washington. “WVON is the radio station that made Harold Washington the mayor of the city of Chicago. So, we take great pride in doing what we can do to advance the cause of radio, the cause of the Black community. WVON is a marvel as far as I’m concerned,” said Spann in an interview prior to his passing.

“No history can be complete without recognizing the work of Pervis Spann. He synced the nexus of entrepreneurship and social activism,” said Rev. Otis Moss.

Spann is also survived by his wife of 67 years Lovie, his son Darrell, who was his caretaker, and daughters Melody Spann-Cooper, Latrice Levitt and Chanté Spann and host of grandchildren and great-grandchildren, nieces and nephews.