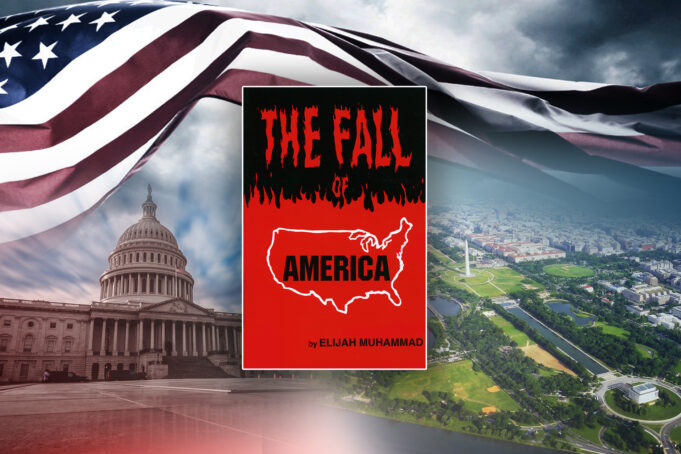 It is impossible for America to be the victor in this universal war because of divine intervention against her. Although she has enough deadly material manufactured to try to win, can she win against Allah (God)?

She boasts of her material and being able to destroy the people of earth thirty times. If she was left free to use her material maybe America could win, but the divine die was set against her long before she ever became America.

She can try and boast of her idea of mind to deceive her Black slaves, but she will deceive herself and them. America is made manifest, by Almighty God, in the Person of Master Fard Muhammad, to Whom praises are due forever, that she is total and deadly enemy against her once slaves.

For many years, I have written that America’s greatest sin is her evil done to her Black slaves. Allah (God) intends to repay her for what she has done.

She deceives the Black slaves right at the point of total destruction. She tries to woo the so-called Negro with false and temporary promises by offering him high political jobs to keep him from turning his attention to self and kind. The Black politician could and should use his political knowledge to benefit self and kind.

The eyes and ears of Allah (God) are open, looking and listening to their actions. It is not necessary for Allah (God) to use mechanical devices. Allah (God) is physically real and He has real physical eyes and ears. He is capable of seeing and hearing everything we do and say. He has power to defeat us in our plans which are against His plans.

The American slave-holders want to deceive the so-called Negro into believing that Allah (God) is not paying attention to them. The White man wants them to believe that he is the god that they should pay attention to.

I warn my people who believe in the idea that the White man is the god they should pay attention to. You will come up the loser.

The scholars and the scientists know that America cannot win. It is not just I, alone, saying this.

If it were just Russia, China, Viet Nam and Korea using their judgment of how best to destroy each other, maybe America could win; for she has as much as they have in war material and scientific preparation.

It is only a mistake that one should believe in America’s ability to build a way-station in the air or on the moon for she will not be able to use it against us, for the divine plan is set to destroy her.

We have many things out there in space that can be brought into action against America or any other nation today; for Allah is the Greatest.