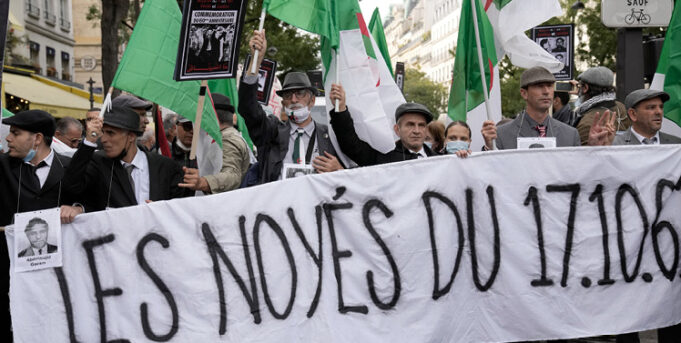 (GIN)—Tucked away in the treaty that signaled Algerian independence from France was a “gerboise bleue”—a “blue desert rat” and a code name for the first French nuclear test on Algerian soil.

In the independence pact, known as the Evian Accords, France reserved the right to test atmospheric and underground nuclear bombs in Algeria, helping to make France the fourth largest nuclear power in the world after the United States, the Soviet Union, and the United Kingdom.

The first French bomb was larger than the American “Trinity,” the Soviet “RDS-1”  and the British “Hurricane.” The yield was 70 kilotons—bigger than the three bombs put together. By comparison, “Fat Man,” the Nagasaki bomb, was one-third as powerful.

More than 60 years have passed since the nuclear testing began, but the after-effects are still visible. Victims on both sides of the Mediterranean have not been properly compensated and the extent of the damage—cancers, blindness and birth defects—not properly assessed.

No journalists were allowed to view the nuclear tests but an eyewitness had this to say: “The desert was lit up by a vast flash, followed by an appreciable shock wave. An enormous ball of bluish fire with an orange-red center gave way to the typical mushroom cloud.”

In France, news of the gerboise bleues success was met with national pride. President De Gaulle stated, “Hurray for France! Since this morning, she is stronger and prouder.”

Meanwhile, the ceasefire produced by the Evian Accords was followed by a particularly violent transition period. The OAS, a dissident far-right French paramilitary group that refused Algerian independence, stepped up its bombings and assassinations, leading to the departure of hundreds of thousands of French settlers from Algeria. The eight-year war of independence ended with the signing of the Evian Accords on March 18, 1962, now 60 years ago.

The Evian Accords consisted of 93 pages of detailed agreements that covered cease-fire arrangements, prisoner releases, the recognition of full sovereignty and right to self-determination of Algeria. They also permitted France to maintain its naval base at Mers El Kébir for another 15 years and facilities for underground nuclear testing in the Sahara.

Historians estimate some half a million civilians and combatants died during the “events in North Africa” which officially could not be called a “war.” The vast majority of the dead were Algerian although authorities insist the figure is three times higher.

France has slowly begun to take stock of its brutal role in the war on Algerians. From Francois Mitterrand, “France and Algeria are capable of getting over the trauma of the past,” to Francois Hollande who called the war “brutal” to Emmanuel Macron who said it was time France “looked our past in the face.” An apology—not yet given—could be in the works.

The French government says it will open classified police files from the Algerian war 15 years ahead of schedule in order to “look the truth in the eyes.” The files cover judicial proceedings by the French police and military forces during the 1954-1962 war of independence. They are likely to confirm widespread use of torture and extra-judicial killings by French forces.

“We have things to rebuild with Algeria,” said Culture Minister Roselyne Bachelot. “They can only be rebuilt on the truth.”