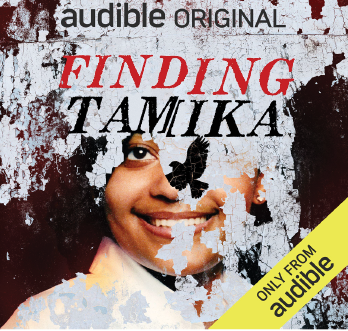 “Finding Tamika,” a blockbuster 10-part podcast released in early March, tells the riveting story of Tamika Houston, a Black 24-year-old from Spartanburg, S.C., who disappeared in 2004. Her case became a rallying cry for other missing Black women in America. It sparked demands of accountability for the media, law enforcement and systemic failures that routinely ignore missing Black girls and women.

The story of “Finding Tamika” deals with this issue while calling a new generation to raise up the stories and lives of the dead, reveal past failures, and chart a new future course.

This true-crime drama is deep and dark in style, at times, telling Tamika’s story through the lens of friends, family, and in her voice.

Erika Alexander, actress and activist, narrates, writes, and co-produces this documentary that offers an intimate glimpse into Tamika’s life.

Created by Kevin Hart and Charlamagne Tha God’s SBH Productions, the production team includes Tamika’s aunt, Rebekah Howard, who forced the media to pay attention to her niece’s disappearance. The podcast is available on Audible.

Finding Tamika is compelling because of dual narration using Ms. Alexander while Tamika and others share their aspects of the story in their own voices. Audio recordings of Tamika, police, a district attorney, family members, a boyfriend, a best friend, a psychic, and others, alongside haunting music enhance the story.

It is such an engaging production that the tragedy of Tamika’s life becomes woven into listeners’ hearts and minds.

While there has been extensive media coverage of missing young White women such as Natalee Holloway, Lacy Peterson, and Gaby Petito, too little attention is still paid to missing Black women.

During a February congressional hearing on murdered and missing women of color, many testified about their frustrating attempts to get the attention of law enforcement and adequate media coverage. Jamie Raskin, a Democrat and chair of the Oversight Subcommittee on Civil Rights and Civil Liberties in the House, said, “This is a crisis hiding in plain sight.”

Advocates told lawmakers that the federal government does not collect accurate and complete data to understand the missing women of color problem fully. According to the U.S. Census, women and girls of color accounted for 40 percent of missing females in 2020, despite making up just 16 percent of the population.

According to one frustrated participant, missing Black women are not a new issue. They have been ignored because society does not care about us, Black people, said the House hearing witness.

Rebekah Howard discussed the details of the podcast during a telephone interview with The Final Call. The team tried to do the story very creatively, introducing Tamika as a whole three-dimensional character, which hadn’t been done before, she said, adding, “I think Erika Alexander deserves so much credit for the writing and James Green, our executive producer, and the music even. Chad Corey was the gentleman who did all the sound design.”

“The story aimed to highlight the Missing White Women Syndrome dilemma. This is the most important message I want people to take away. Additionally, I wanted Tamika’s story to be told more fully,” Ms. Howard said.

She said little has changed in reporting about missing Black women and girls. “There seems to have been some changes with cable news networks for a while. They did not cover these cases in the same way as Natalie Holloway’s, in such an exhaustive and continuous manner. Recently, when the Gabby Petito case presented itself, they fell back into the same soap opera formula,” she observed.

Regarding the recent congressional hearings, Ms. Howard viewed them as little more than posturing. “I am heartened that the issue got before Congress, that it’s something I would have never imagined 15 or 16 years ago would even be possible. But I don’t know. I am a little too cynical about how things are operating with our government to think that anything meaningful will change.”

Ms. Howard spoke of the importance of the Black Press in covering this issue.  “When I say that I could not get coverage for Tamika, I say that, but with an asterisk. Because the only people who cared and reported, in the beginning, was the Black media. It was significant because, at the end of the day, it was apparent the answers to Tamika’s story came from within our communities,” she said.

In her interview with The Final Call, Erika Alexander elaborated on the importance of storytelling. “People organize themselves by telling stories about themselves and others. If you don’t own your story and allow others to tell it about you, you will live under their version of it,” she argued.

Ms. Alexander described how the story of the Black experience in America has been disparaged because others have told it. “The emphasis on second-class citizens, being subservient, criminal, all of these things,” she said.

“Look at what they said about themselves and what they continue to tell about themselves—their story is a story of heroes, conquerers, and all these things. So they could more than anything colonize our minds,” said the star of the iconic 1990s sitcom “Living Single.”

Ms. Alexander explained how her involvement in the project came through her relationship with journalist David Person of Alabama, who pitched the storyline.  “I told him I would consider doing a project on Tamika Houston in 2020. He arranged a meeting with Tamika’s aunt.

“I probably said ‘yes,’ even before meeting Rebekah, but we talked about what we could accomplish and what we both thought possible. We got together and pushed forward, not knowing whether it would be received. You know, the more righteous something is, the harder it is to find funding and support for it,” said Ms. Alexander.

Tamika’s story reinforces the need to keep the plight of missing women in America out front, especially Black women and girls.

According to Rebekah Howard, only the Black community can accomplish this, not government. As a board member for the Black and Missing Foundation, she advocated for adequate funding of community-based initiatives.

Bigga Dre, a rapper and activist from Philadelphia, founded an organization called Eschatology (Bring Our Girls Back). “It’s great to see people using their platforms to bring awareness,” he told The Final Call. “Finding solutions is one of the most important components of this issue.”

“One way to achieve this is by promoting prevention awareness that offers solutions,” he said. “We wish to reduce the number of abducted people or eliminate it. It showed in the podcast how her aunt, who was a PR person, was having a difficult time spreading the word. Therefore, I created this campaign because we need to advocate for ourselves when it comes to us.”

Bigga Dre’s biggest challenge is not its programming but funding. In response, he has started a crowdfunding campaign. “Among our goals is to provide community members with resourcing and prevention tools, such as a comprehensive missing person app, therapeutic, holistic community healing, and a community resource building program.” Visit https://app.99pledges.com/fund/eschatology2021 for more information.

“We have always placed Black women and girls in a precarious position that no other women have ever held,” said Ms. Alexander. “Managing without control, now they have disappeared, and no one is looking for them. There needs to be more people of color in leadership positions. Athletes or entrepreneurs who make money have mothers and aunts, girlfriends, wives, or grandmothers.

It is their responsibility to give back to the community. They should support the people doing the work. That way, our conversations aren’t confined to salons or living rooms,” she said. “If you help the woman, you help the village, and by helping the village, you will grow, build, and ultimately be exalted.”