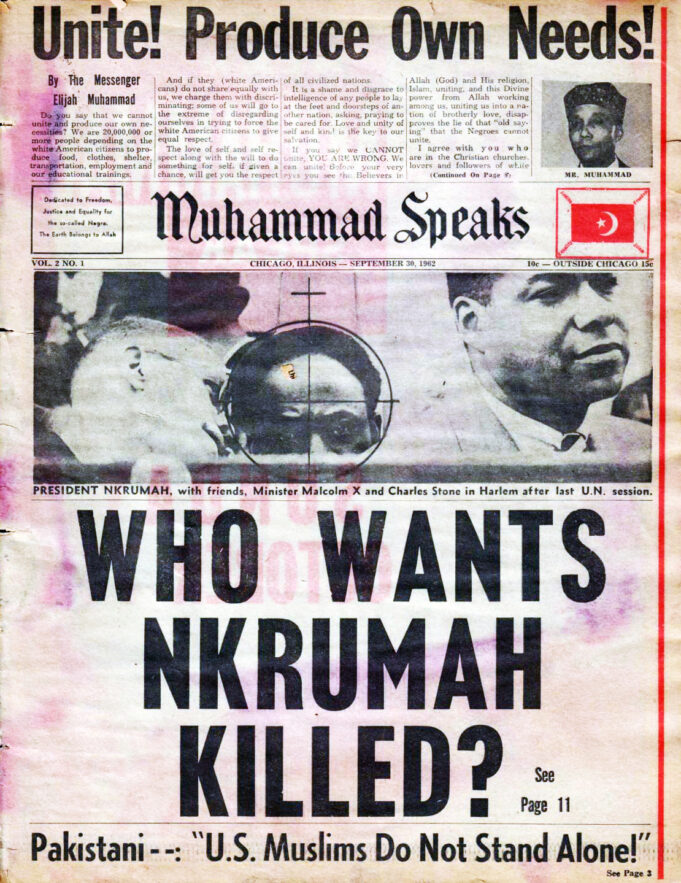 The West African country of Ghana celebrated March 6 the anniversary of its 1957 independence, or as it’s called “Ghana National Day.” The man who championed the struggle that led to independence from colonial rule was Asagyefo Kwame Nkrumah.

But the date/event that is least remembered, and one that put Ghana and its leader on record as Africa’s champion for continental liberation, was the 1958 All-African People’s Conference (AAPC), which Nkrumah hosted.

The theme of the conference, “Hands Off Africa!” was directly influenced by a speech made by Prime Minister Nkrumah eight months earlier at the conclusion of the Conference of Independent African States. According to Susan Williams’ 2021 book, “White Malice: The CIA And The Covert Recolonization of Africa,”

The conference was decided at this Ghana sponsored meeting, that included “eight independent states of Africa—Ethiopia, Ghana, Liberia, Libya, Morocco, Sudan, Tunisia, and the United Arab Republic (Syria and Egypt). It was decided at this meeting to hold an All African People’s Conference later that year, as a way of bringing together the freedom movements of every part of Africa—‘to put meat on the bone.’ ”

Notices were distributed: “Peoples of Africa, Unite! You have nothing to lose but your chains! You have a continent to regain! You have freedom and human dignity to attain!”

“Once the delegates had signed in at the secretariat and received their ‘freedom badges,’ they gathered on the terrace. Many of them knew each other, at least by reputation, and the attendance, had been described as a ‘Who’s Who of African nationalism.’ ‘You name it,’ commented Maida Springer, an American labour activist at the conference, ‘they were there. From everywhere,’ ” according to White Malice.

Least known to most delegates was the Belgium Congo’s Patrice Emery Lumumba. He was the president of the newly-established Mouvement National Congolais (MNC) and had attended the conference with two other members of his party. Lumumba, at the conference, spoke of his desire to receive inspiration from Ghana and to exchange ideas with other freedom fighters.

The conference made a name for future Prime Minister Lumumba, in 1960, and gave him a mentor in Nkrumah and a blossoming unification between Ghana and the Congo.

Others, including writer Franz Fanon, raised questions of using violence in some cases as a necessary strategy towards liberation. Fanon succeeded in changing the theme of the conference: from “non-violent liberation struggle to struggle by any means.” Fanon, a psychiatrist born on the French-ruled Island of Martinique, led a delegation of the National Liberation Front (FLN), which was fighting a bitter war for freedom in Algeria against its French colonizers. Note: Just a few months earlier the FLN had set up in Cairo a government in exile.

Other conference delegates included: “Kenneth Kaunda of Northern Rhodesia, who went on to become the founding president of independent Zambia in 1964; Hastings Banda of Nyasaland, who became the premier of Independent Malawi in the same year; Kanyama Chiume of Nyasaland, who became foreign minister in Malawi’s first independent government; and Joshua Nkomo of South Rhodesia, who served as vice president of Zimbabwe from 1990, following majority rule in 1980,” wrote Williams.

Prime Minister Nkrumah concluded the conference, giving a special shout out “to those who had come from beyond Africa’s shores—especially Black Americans from the United States and the Caribbean.” He expressed heartfelt appreciation.

“The African Revolution,” observed Nkrumah with solemn satisfaction, “had started in earnest.”

Though Nkrumah and Africa appeared on the verge toward liberation, it was to be thwarted by the deeply distressing history of America’s Central Intelligence Agency (CIA) and its involvement in plots to eliminate certain regimes in Africa.

This writer began by listening to the audio book of “White Malice,” and became overwhelmed with the mountain of CIA plots and intrigue and influence. The CIA moved to protect U.S. multi-national interests, including giving money to American organizations and even creating publications and publishing houses to influence and monitor what was written of Africa.

I purchased the 600-page hardback just to read for myself the depths to which the U.S. government would stoop. It included President Dwight Eisenhower encouraging the CIA to plot the death of Lumumba. And, later overthrow Nkrumah to maintain its hold on Africa’s natural and mineral resources and hold sway in its Cold War fight against the Soviet Union.