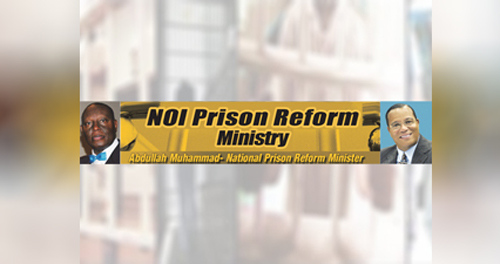 The NOI Prison Reform Ministry Study Group circles throughout the American Prison System are changing lives with the Life-Giving Teachings of The Most Honorable Elijah Muhammad as taught by the Honorable Minister Louis Farrakhan.

Minister Farrakhan has stated, “True prison reform starts with the enlightenment of the inmate of who that inmate is in reality and not what he or she has become because of circumstances. True prison reform reconnects the soul to its Creator and begins to provide those human needs and then we see a change in attitude in the inmate that leads to behavioral change.”

The struggle and life in prison of Brother Zachariah Muhammad is “demonstrative” of Minister Farrakhan’s words. Brother Zachariah shares with us an “experience” while being medically treated at the Kendall Regional Center located in Miami, Florida. He was taken to this medical facility from the prison of his confinement at FCI-Tallahassee, Fla.

He was taken for a “brain biopsy.” He stated, “The doctors explained the procedure to me. I immediately requested to go back to the institution based on the thought of them cutting my scalp and pulling it back and then drilling a hole into my head, my skull, and then cutting tissue of my brain. I immediately rejected. I went back to the institution faced with the same difficulties.

To see my grandmother was shocking because I have never known of such visit with having a high custody level. She said to me, “they told me you requested to see me.” I explained the procedure to her as it was explained to me. She said to me, “you believe in God, is that right?” I said, “yes ma’am.” She said, “well ask God to see you through.” So, I proceeded on with the surgery.

Before they put something inside of the IV bag to put me to sleep, I asked the nurse to see the doctor before I’m put to sleep. Dr. Joy Jose came to me. I asked him, “Am I going to die.” He said, “I cannot answer that.” I told him it was ok, just tell me the truth. He said, “it is a 50-50 chance.” I made another prayer supplication asking Master Fard Muhammad, the Mahdi of the Muslims and Messiah of the Christians, to see me through and I would serve Him all the days of my life. The procedure went well after four hours.

The next day, six neurologists came to me, and I saw them in a manner that anyone else would see anything else before them. I told each one of them what the procedure was that they did. I told them I was floating on the top of the ceiling, saying he did the surgery, this one did the cleaning up the blood, this one passed another tube, while I was looking at them from the top of the ceiling operating on me, on the table. They asked me, “you know where you are?” I said, “I am at Kendall Regional Hospital.” I said, “you are Dr. Joy Jose.” They said, “he is all stable.”

They left my room. But, after surgery, the word throughout the institution was that I was dead. I had to stay in the hospital for four days before they could take the staples out of my head. I said, “I want to go back to the compound to show them I am not dead.” I got to the compound, and everybody were in tears even some prison staff, because it was pronounced that I was dead. The following week I did a sermon at the Nation of Islam jumu’ah prayer service, letting them know that the God I serve is a “Living God.”

I made a covenant with Him, saying, if He sees me through this, I will serve Him all the days of my life. I will say, if anybody wants to test your faith, go through the things that I have been through to be able to make a testimony.

This writer conducted a phone interview with Brother Zachariah Muhammad. The following is a little of what he said.

When did you go to prison and at what location?

I went to prison in Miami, Fla., after being convicted of possession of a firearm. I was later transferred. It was at Three Rivers (prison in Texas) that I started serving my sentence.

When did you encounter the teachings of the Most Honorable Elijah Muhammad?

As I recall, I first heard the name of the Most Honorable Elijah Muhammad through my parents. My father was a Muslim, and my mother was a member of the Black Panthers. When I went to prison out in Texas, I heard the name again, “Elijah Muhammad.” At that point, I decided to find out “who is this Elijah Muhammad,” by going to the jumu’ah services. I did not accept the Teachings there because I was discouraged about being so far away from home. It was the Nation of Islam jumu’ah services, but I didn’t find out until after attending a few times.

When did you become a student of the Most Honorable Elijah Muhammad and the Honorable Minister Louis Farrakhan?

It was about two or three years later. I was transferred to another institution called Talladega, Ala. It was there that I saw “homies” that we would call “home team” out of the Miami area. I remember seeing when I first got locked up in Miami. I saw their appearance, the transformation. They were clean shaved, the dreads, the beards and all that were groomed.

It was fascinating to me. I seen their clothes pressed, their boots shined. It was a militant atmosphere for me. I spoke to one of the homies named “Alfonso.” I said, “Brother are you in the Nation.” He said, “how do you know, because I just left some Nation brothers.” Then he told me, “this is where it’s at brother. Get yourself prepared to be able to go out in the street and not ever come back to prison again.”

So, Talladega, Alabama was my base, where I started learning the teachings, researching the teachings, and applying the teachings there at Talladega, Ala. I quickly excelled in the ranks. I was put in a room (cell) with a great brother. At the time, he wasn’t the inmate minister, however, later he became the inmate minister. He appointed me as the “Captain Lesson Check.” I was so impressed by the Student Enrollment, all the Lessons, the Aims of Islam, the General Orders, and the Restrictive Laws. He appointed me because of my spirit to learn all the lessons and laws.

Did you lead a Study Group during your incarceration?

I did. I served as the Student Acting Coordinator after being transferred back to FCI-Miami located in my hometown. The brothers were impressed by two lectures I gave at jumu’ah services. The institution gave a great response. The jumu’ah service was filled to the point that brothers had to stand along the wall. Other brothers could have a seat (or) they could sit down on the rug. I became the inmate minister there sharing what Allah blessed me with.

The prison officers and staff would come to jumu’ah services to hear the Teachings of the Most Honorable Elijah Muhammad because I had studied so in depth about the Second Self of God (the woman). All the female prisoners would come out. They wanted to hold post for me at that institution. I became a model prisoner, being trusted by prison staff. This is all true. They trusted me to work in the business office.

It was some beautiful people there. They didn’t see me as an inmate. They saw me as a human being. They made me go to school to learn that function there in the business office. There was a lady there named, Ms. Brandley. She was referred too by inmates as “Mother.” She saw me through the whole way. She said to me, “Muhammad, if you want to stay up here you will have to learn this business.”

So, I had to go to the Prison Education Department to learn business management. It was an 18-month course. I had all the resources needed on the job because everyone there knew what I needed. They helped me with accounting 1 & 2. I got my certification. I didn’t get the degree. The certification is in Business Management and Business Supervision. I was trusted with handling blank checks already with a signature to make the needed orders.

Moving forward as the Student Coordinator. How did the prison administrators respond to you?

They responded to me with great love and respect without letting it interfere with their jobs. I remember getting into an altercation and that landed me in confinement or segregation. All the business office employees came there to check on me. The prison administrators attempted to transfer me multiple times. But, it was a “no go.” However, the lady in charge went on vacation. During her absence I was transferred. They transferred me to FCI-Edgefield, S.C.

Talk about your preparation for reentry?

During the process of my transition back into the community. I applied everything. I studied. I was released in 2009. I went to my nearest mosque in Miami, Fla., to report in. I recited and fell in the ranks. I excelled in the ranks by becoming a lieutenant. I received awards, one for attendance, number one with The Final Call newspaper. My squad won the trophy for sales of The Final Call. After two years home I became the FOI of the Year. A couple of years later I was assigned as the Student NOI Prison Reform Coordinator.