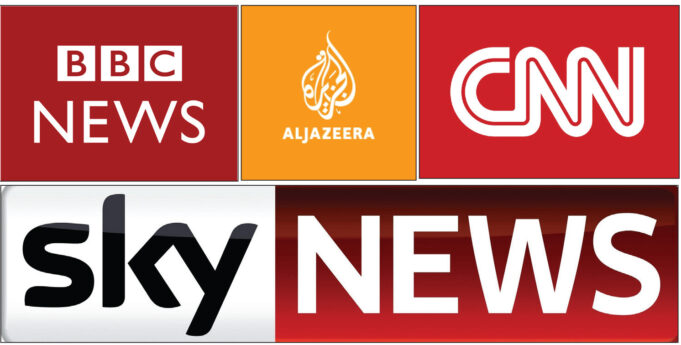 In news coverage of Russia’s invasion of Ukraine, the Western Press found it difficult to comprehend how this conflict in White Ukraine could happen.

“Now, because of the Ukrainians’ whiteness and proximity to the west, it’s apparently difficult for some political commentators and roving reporters to grasp how this conflict could have come to pass. It’s as though bloodshed and invasion is only to be foisted upon countries inhabited by Black and Brown people – and some have had no qualms about sharing their sense of alarm regarding this sobering turn of events, perhaps unaware of how this feeds into white supremacist ideology which renders the lives of others of no value,” noted the London-based Independent newspaper.

CBS News foreign correspondent Charlie D’Agata said after the conflict erupted: “This isn’t a place, with all due respect, like Iraq or Afghanistan that has seen conflict raging for decades. This is a relatively civilized, relatively European–I have to choose those words carefully, too–city where you wouldn’t expect that, or hope that it’s going to happen.”

Not to be outdone, Al Jazeera English presenter Peter Dobbie described Ukrainians fleeing the war as “prosperous, middle-class people” who “are not obviously refugees trying to get away from the Middle East … or North Africa. They look like any European family that you would live next door too.”

Ukraine’s former deputy general prosecutor, David Sakvarelidze said on BBC: “It’s very emotional for me because I see European people with blonde hair and blue eyes being killed every day with Putin’s missiles and his helicopters and his rockets.”

To which the BBC presenter responded: “I understand and of course respect the emotion.”

These comments were met with anger online, with several users labelling the remarks as “double standards” and calling for a “reckoning.”

So, according to Nadine White writing in the Independent, “it’s confirmed: not only do we have racism at the Ukraine borders, where ethnic minority refugees report being turned away from safety, we have the same vein of bigotry across parts of the international media sphere. This only serves to further legitimise the dehumanisation of non-white people and especially those who are suffering through conflict.”

Professor Arthur G.O. Mutambara, a visiting full professor at the University of Johannesburg, wrote in oil.ca.za that events in Ukraine do not “augur well for an intelligent understanding of global affairs.”

According to Professor Mutambara, “The single, unsophisticated and unbalanced narrative we have been receiving from Western leaders and the leading global news outlets such as CNN, BBC and Sky News is not conducive to resolving global challenges. On the contrary, such brazen and self-serving intellectual ineptitude inflames conflicts.”

Professor Mutambara says the conflict between Russia and Ukraine was inevitable.

In the context of the history for the Cold War, Russian demands that Ukraine remain independent but should not join NATO are not entirely unreasonable. Ukraine has a 1,242,742 mile border with Russia, and the possibility of joining NATO, the Western alliance, with her neighbors having already joined would mean the entire encirclement of Russia by her adversaries.

Obviously, you could say, Russian leader Putin felt a red line in the sand had been drawn.

“For example, European politicians, such as the Bulgarian prime minister and French National Assembly member Jean-Louis Bourlanges using words like ‘intellectual’ and ‘quality’ to describe white Ukrainians seeking sanctuary across Europe, denoting a greater worth and warranting a warmer welcome than the undesirable people of colour who typically flee their war-torn countries.”

“Of course, none of this is particularly shocking, coming from a Western media and political class that’s predominantly White. Europe has a long way to go in improving media diversity. This is also the case for U.S. media, where 77 per cent of employees at public radio and TV stations are White compared with their 60.6 per cent of the population, meaning this group is overrepresented in this space. Meanwhile, around 94 per cent of journalists in the UK are white.”