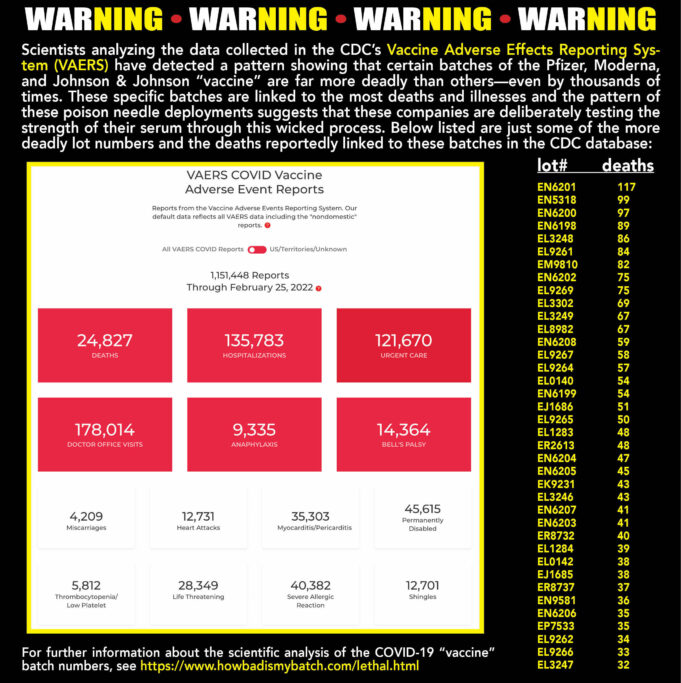 “Remember the syphilis experiment? Remember what they did to the Native Americans with smallpox? Remember the vaccine that they gave us for polio that was cancer itself? So, how in the hell could you trust them with a vaccine after you know what they have done and that they are capable of doing it again on a bigger and broader level?” –The Honorable Minister Louis Farrakhan—The Criterion, July 4, 2020

On June 3, 1946 (just 10 months after America dropped the first atomic bomb on Japan), Time Magazine reported on a debate in Congress that took place a week earlier. The article lifted two statements regarding the quest for bio-warfare and depopulation:

“During a routine House debate on naval appropriations last week, Representative Albert Thomas opened his mouth a millimeter too wide. Out popped a shocker. Said Thomas: “We have something far more deadly than the atomic bomb.”

Wrote General H. H. Arnold in One World or None: “It is worthwhile pointing out that biological warfare, consisting of the spreading of disease, could occupy a position similar to atomic warfare. Human beings would have little natural resistance against such synthetic diseases, which might conceivably spread, in a biological chain reaction, through the world’s entire population.”

The inconceivable wickedness of the Enemy of God and His people is being exposed daily, confirming the words of the Honorable Minister Louis Farrakhan.

While COVID 19 dominates public discussions, an older viral terror keeps popping up in the laboratory work of many scientists studying the coronavirus: the HIV gene.

According to the University of Michigan Health/Library, “HIV (human immunodeficiency virus) is a virus that attacks cells that help the body fight infection, making a person more vulnerable to other infections and diseases. It is spread by contact with certain bodily fluids of a person with HIV, most commonly during unprotected sex (sex without a condom or HIV medicine to prevent or treat HIV), or through sharing injection drug equipment.”

“AIDS is the late stage of HIV infection that occurs when the body’s immune system is badly damaged because of the virus.”

The question that has to be answered is why these “viruses” always seem to have a greater, more devastating deathblow to Black people. We must remember that the AIDS virus was initially rumored to have its origins among White homosexuals in San Francisco and New York in the early 1980’s.

However, according to the Center for Disease Control (CDC) Diagnoses of HIV infection, by race/ethnicity and selected characteristics, 2018, HIV Surveillance Supplemental Report:

Now, with the onset of COVID-19 allegedly originating in China, we have basically the same results, according to the Kaiser Family Foundation (KFF):

“Over the course of the COVID-19 pandemic, analyses of federal, state, and local data have shown that people of color have experienced a disproportionate burden of cases and deaths. They have shown particularly large disparities in cases and deaths for Black and American Indian and Alaska Native people and in cases among Hispanic people compared to their White counterparts…”

During a November 2004, Final Call interview, Boyd Graves, JD, a victim of AIDS, revealed 7 of 15 reports by the US Special Cancer Virus Program which gave proof of the laboratory development of AIDS. He also filed two lawsuits in San Diego Federal District Court naming Presidents Bush and Obama, respectively, in an attempt to force the government to expose the remaining 8 reports. Both lawsuits were dismissed without explanation.

Among the key points of his impeccable research was the following statement about AIDS and the fact that any virus which could be tailored to the Black genome to be more infectious to Blacks: “What the science and medical evidence concludes is that the HIV enzyme seeks out a receptor site in the blood of the Black genome. The receptor site is the CCR5 Delta 32+ (positive) gene that all people of color have.

In the same sense, on the other end of the spectrum, is the 15 percent Caucasian population of the world, which is CCR5 Delta 32-(negative) gene. That means that under no circumstances, whether HIV came through the air, intravenous drug usage or any form of the sexual activity, would the virus be transferable in this sector of the world’s population, which is basically of northern European descent.

It is speculated by some experts that, in a worst-case scenario, 85 percent of the world’s population could potentially perish under these designer viruses and designer synthetic biological agents.”

Could the HIV gene, through laboratory engineering be inserted in the COVID 19 virus and tailored for the Black genome, to weaken or negatively affect it? Has history, in any way, implied such an idea could be imagined ?

Despite the naysayers, what certainly points to the laboratory invention of these so-called viruses is that they have U.S. government patents.

There are a number of studies in which scientists around the world have concluded that HIV genes are in the coronavirus.

According to Mr. Graves, there were two abstracts of research presented by Indian and Chinese scientists demonstrating that HIV genes are targeted for the very distinctive Black genome.

One such study was done at the Kusuma School of Biological Sciences, Indian Institute of Technology in New Delhi, late January 2020. Almost a dozen Indian scientists were involved in the project. In plain language, they found that:

HIV had been deliberately inserted into COVID-19.

The Abstract or short summary of their findings were entitled, “Uncanny similarity of unique inserts in the 2019-nCoV… “Importantly, amino acid residues in all the 4 inserts have identity or similarity to those in the HIV-1 gp120 or HIV-1 Gag.”

After reporting on the various test and processes these scientists used in their conclusions, they wrote: “The finding of 4 unique inserts in the 2019-nCoV, all of which have identity /similarity to amino acid residues in key structural proteins of HIV-1 is unlikely to be fortuitous in nature.”

Another group from China documented three insertions comparing fewer spike glycoprotein sequences of coronaviruses. This is further evidence that HIV genes were inserted to increase the effects of the COVID 19 virus on the Black genome.

These reports, like other controversial reports, were removed from the internet under the guise that all the scientists had withdrawn their conclusions.

In conclusion two new pills for coronavirus were announced, recently, to fight the dreaded COVID 19. One of the pills is Remdesivir. Remdesivir, a drug proven to damage the kidneys, was used to supposedly fight HIV. Instead, it killed people. It was reinvented for COVID-19 and is used by hospitals throughout America. What an uncanny similarity. Is this “fortuitous in nature”? Not with America’s history of treachery.

“…We can’t trust you no more white folks, not with our lives. We’re not justified in so doing.” The Honorable Minister Louis Farrakhan