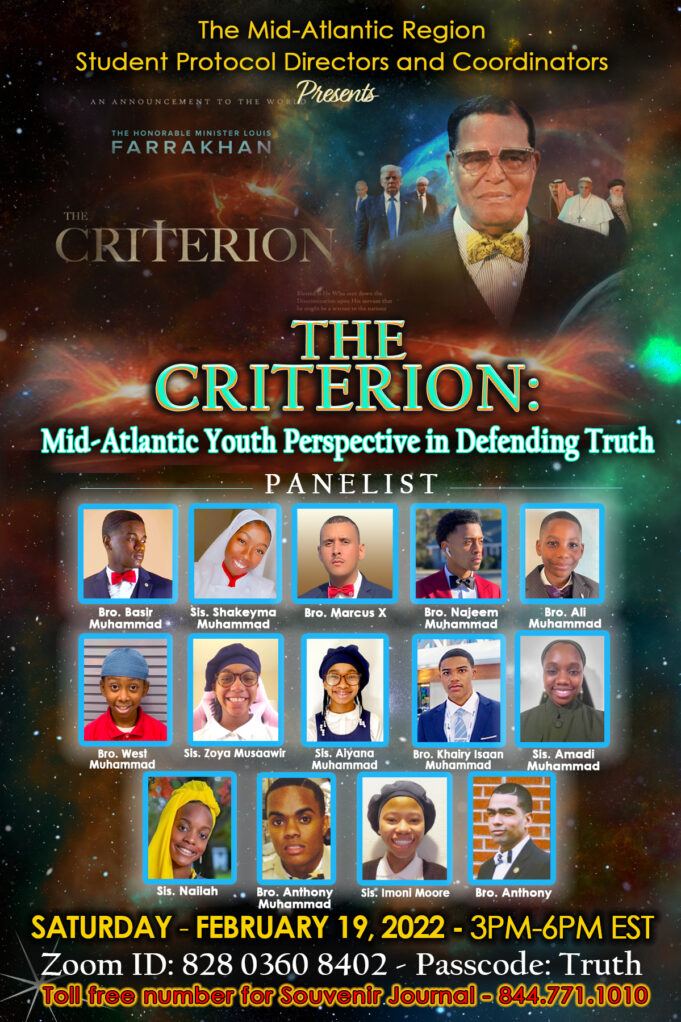 WASHINGTON—Inspired by the Honorable Minister Farrakhan and his divine instructions and guidance to Black people in the U.S. and around the world regarding the Covid-19 vaccine, 11 youth panelists recently took to the virtual world to defend the Minister’s July 4, 2020 message, “The Criterion.”

“Our responsibility as youth that follow the Honorable Minister Louis Farrakhan is to share his words publicly while he is still among us. He is the best of all examples and to walk with him is an absolute honor and privilege,” said 13-year-old Nailah Muhammad of Mosque No. 4.

“I want to tell you right up front you will not conquer this virus because it didn’t come from Wuhan,” Min. Farrakhan said during The Criterion. “It did not come from Fort Detrick in Maryland because if you had made it, you would know how to handle what you made. But you do not know this virus, it is new, it’s different. It mutates and goes in different directions with a different strain of itself. You’re running trying to get a vaccine like you’re really interested in saving the world from this virus,” the Minister added.

“The Honorable Minister Louis Farrakhan is God’s trumpet,” added 22-year-old Najeem Muhammad from Mosque No. 36 in Charlotte. Through the Minister’s knowledge, wisdom, and understanding of God and self, it helps to reshape our mind and spirit,” he explained.

“The optimistic presence of our young student’s readiness to take their responsibilities in building the Nation of Islam and the teachings were demonstrated during ‘The Criterion: Mid-Atlantic Youth Perspective in Defending Farrakhan,’” said Student Minister Abdul Khadir Muhammad of the Mid-Atlantic Region.

“I witnessed 11 intellectually promising panelists exhibit confidence in defending The Honorable Minister Louis Farrakhan, ranging from an aspiring pianist, authors, educator, journalist, health care provider, and student ministers. With the guidance and influence of Master W. Fard Muhammad, The Most Honorable Elijah Muhammad and The Honorable Minister Louis Farrakhan, our youth are headed to the top of the Nation.”

“We will not accept your vaccine so you can slow down, because whenever you bring it out, it’s for your people,” said Minister Farrakhan, during his critical July 2020 message. “You give it to them because we are not accepting death. You are the very representative of death itself, the pale horse. Everywhere you have gone in the world, hell went right behind you. We are sick of hell, and we are sick of death. So, all of you that have made a covenant with, the covenant is going to be annulled … your agreement with hell will be broken,” the Minister added.

“The Honorable Minister Louis Farrakhan’s words quoted from the Prophet that the ink of a scholar can make the devil smaller and smaller; today, our role is to live in a way pleasing that is to Allah (God) and to bring in universal change,” stated 21-year-old Khairy Muhammad, of Mosque No. 92.

“The Criterion sounds the alarm that forces Allah (God) to send down a pestilence from Heaven seeking repentance from His people,” said Anthony Muhammad of the Raleigh North Carolina Study Group, during the youth forum.

West Muhammad, 12, of Mosque No. 6 in Baltimore, stated, “The Honorable Minister Louis Farrakhan instructed his followers not to take the Covid-19 vaccine and initially I was skeptical. I kept wondering how Minister Farrakhan would know that a vaccine was forthcoming, but as I began to study the lecture, I realized that we truly are following a man of God.”