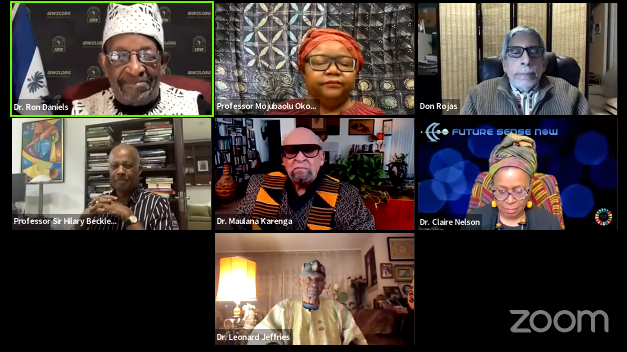 A common complaint among African Americans, especially during the month of February, is why Black history—all of Black history—is crammed into 28 days when the full range of a rich, vibrant and essential living history of a people demands to be taught year-round.

One way to correct this, according to Dr. Ron Daniels and Don Rojas of the Institute of the Black World 21st Century (IBW) during a Feb. 28 panel discussion, will be through the Black World Media Network (BWMN).

IBW launched what Rojas and Daniels described as a milestone movement during Black History Month that will illustrate that Black History is every day.

“Our media network was launched Feb 3,” said Rojas, founder/general manager of the Black World Media Network and former press secretary to Grenadian Prime Minister Maurice Bishop. “We have created a daily digital destination, a must-stop space. We are connecting the geographical and cultural dots from East to West, North to South of all Black people.”

Rojas said BWMN is a politically independent network supporting a global African network that will provide “accurate, timely and credible information (that) is important at national and international levels. “

Rojas, who worked as general manager of Pacifica Radio’s WBAI in New York and served as an editor at the New York Amsterdam News, said content has been aggregated, organized, archived and distributed and “can be viewed anytime, anywhere from a smart phone to smart TV.”

The 24-hour radio station will provide news, news commentaries, clips of great Pan African leaders past and present, messages of inspiration and resistance and music from luminaries like Harry Belafonte, Celia Cruz, Ruben Blades and a host of other Diasporic musicians and entertainers.

“Why this and why now?” asked Rojas, director of communications for IBW. “We’re approaching the end of the UN’s Decade of People of African Descent. The entire Black world will be forced to confront the international right-wing network, racist tyrants and autocrats and a racialized agenda of occupation and oppression supported by powerful disinformation machines which spew lies, distortions, and conspiracies. It becomes imperative for African people around the world to understand the existential threat.”

Several distinguished panelists, including Dr. Julius Garvey, Professor Mojúbàolú Olufúnké Okome, Dr. Leonard Jefferies and Sir Hillary Beckles spent more than an hour in a vigorous debate discussing ways to develop and implement a Global African History Month, the viability of Pan Africanism, as well as how to connect and strengthen ties between and among Africans all over the world.

Jefferies, a renowned Pan African educator and professor Emeritus of Black Studies at City College of New York (CUNY), talked briefly about the consequential work of Senegalese historian, Egyptologist, linguist and anthropologist Cheikh Ansa Diop, whose seminal research and scientific study proved that ancient Egypt was a Black society culturally and historically and that many of the pharaohs were Black.

“[BWMN] can be a base and develop other formulations. We need to plug in with HBCUs and organizations. We have to understand that we’re on a sacred mission,” he said,

Garvey, youngest son of the Hon. Marcus Garvey and president of Garvey TV, while honoring the work and accomplishments of educator and social justice activist Carter G. Woodson, also reflected on the recurring theme that education created and perpetuated by Europeans has not, cannot and will not serve the needs and interests of African people.

He reminded panelists that education is the medium by which people are prepared for their own civilization and advancement of their own race. However, a hindrance to advancement is that Black people are educated in systems which perpetuate imperialist exploitation, he said.

“So-called educated people are unable to fight the regime they find themselves in because what they’ve learned reflects the needs, desires and thoughts of those who enslaved us,” said Garvey, an accomplished surgeon and professor. “Our minds have been brought under the control of the oppressor. We must liberate our minds from mental slavery.”

Western European countries and the United States have assassinated African leaders like Patrice Lumumba, Sylvanus Olympio, Samora Machel and Capt. Thomas Sankara for advancing social, economic and political agencies contrary to the dictates of the leaders of Europe; those African leaders who they don’t murder, they overthrow, he added.

Beckles, vice chancellor of the University of the West Indies and chairman of the Caribbean Reparations Commission, recalls as an 11-year-old listening with rapt attention as a visiting history teacher told the class about Toussaint L’Ouverture, the legendary leader of the Haitian Revolution.

“He spoke about Toussaint, a Black man on a horse, who liberated his people. My mind was blown,” said Beckles. “We were children living on a sugar plantation. Our parents were working for White men on horses. They endured segregation and degradation with 12-hour days of pitiable slave labor. I went to high school and college in the UK but I could never get that image [of T’Oussaint] out of my mind.” Beckles’ latest book is “How Britain Underdeveloped the Caribbean,” which unmasks Europe’s legacy of theft and plunder.

Professor Okome told the panel that “what we see in the Diaspora is also present on the [African] continent. We are the richest continent, but wealth doesn’t belong to Africans.” European educational practices are still dominant and pervasive in Africa. All too often, said Okome, students on the continent who speak vernacular or languages other than English are punished.

“The cleansing of our mother tongue was the way of education. We were and are Europeanized,” said Okome, professor of Political Science, African & Women’s Studies at Brooklyn College.

She said the continent’s educational system is still colonial. Standards of beauty, the academic hierarchy of knowledge, the rankings of universities and the authors who are held up as experts in a variety of disciplines all speak to the marginalization of Black African people, said Okome.

“Who are they citing and quoting? Who are the experts?” Okome asked. “Knowledge is a mafia dominated by White people. We have to cleanse the system of colonialization, take charge of our history and narrative and remove the gap between scholars and people. We have a lot of book knowledge and very hardworking people, but we’re yet to decolonize.”

Dr. Claire Nelson, founder and president of the Institute of Caribbean Studies and Ideation Leader of The Futures Forum, in Washington, D.C., agreed with Okome about organizing along social and professional lines by partnering with Historical Black Colleges and Universities, sororities and fraternities and civic and social organizations. The panel also agreed about the need to build tech capacity, find financing, engaging in analysis and creating Black narratives while building a united front.

Dr. Maulana Karenga, professor and chair of the Department of Africana Studies at California State University, Long Beach, blended Dr. Woodson’s work with the Nguzo Saba as a way to offer a structure on which Africans in the U.S. and abroad can construct educational systems and social, political and economic structures that can reeducate Black people.

“[Woodson] empowered his people. He was about the re-conception and reconstruction of Black culture. He would teach freedom by freeing the mind,” said Karenga, who created and first observed Kwanzaa in 1967. “We have the knowledge of ancient Africans. We are history. We need to develop a comprehensive strategy with historical education as its centerpiece.”