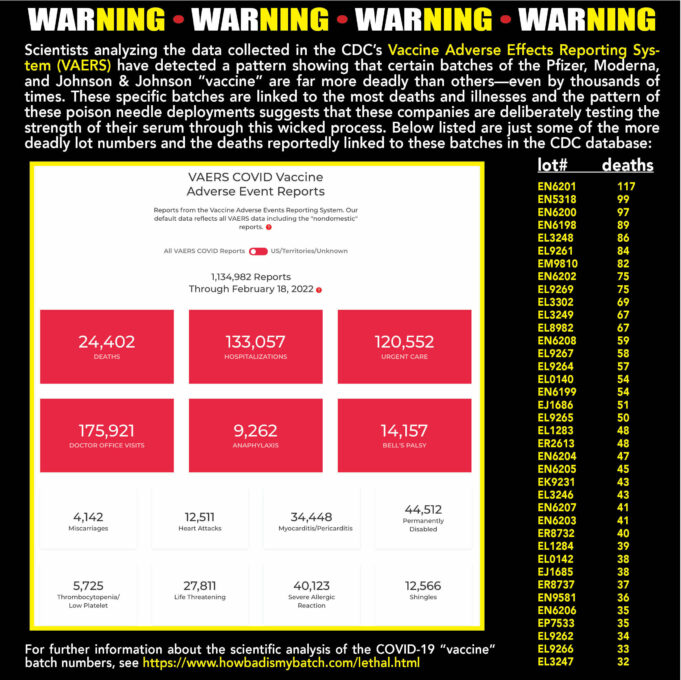 Meanwhile We Must Prepare For The Next Bioweapon Assault

You just can’t make this up. On February 18, 2022, during Germany’s annual Munich Security Conference, Bill Gates (Co-Chair Bill & Melinda Gates Foundation) declared a new pandemic would likely stem from a different pathogen to that of the coronavirus family.

Two years into the waning COVID-19 “pandemic,” he observed that the worst effects have faded as huge swaths of the global population have gained some level of immunity. “Sadly, the virus itself particularly the variant called Omicron is a type of vaccine that produces both T-cell and B-cell immunity…and it has done a better job of getting out to the world population than we have with vaccines.” Surveys indicate over 80% of the African people have been exposed “either to the vaccines or to various variants.”

Ethiopia’s natural immunity is 240 times better than Israel’s “vaccinated” population. These facts are ignored by Gates as he continues to push the vaccine agenda: “Next time we should try and make it, instead of two years, we should make it more like six months.” He added that standardized platforms, including mRNA technology, would make that possible.

Gates is “expecting” a new virus to cause a new pandemic that Big Pharma can use as an excuse to synthesize some new profit-making poisons. Gates and the wealthy see these pandemics as an investment strategy. The shift of wealth to the rich is in the trillions as billionaires got 54% richer during the pandemic.

Gates and his band of murderous thieves purposely overlook other more important lessons learned from courageous doctors who saved the lives of thousands of COVID-19 patients. From the beginning of the pandemic these doctors were using protocols of safe, inexpensive, FDA-approved generic drugs that were viciously attacked by the FDA, Big Pharma and mass media.

While still suppressing the preventive and early treatment approach (safe, effective, inexpensive meds, vitamins), Gates continues to push death shots. He has partnered with the U.K.’s Wellcome Trust to donate $300 million to the Coalition for Epidemic Preparedness Innovations. CEPI helped form the Covax program to deliver “vaccines” to low- and middle-income countries. It aims to raise $3.5 billion to cut the time required to develop a new “vaccine” down to 100 days.

A “new vaccine” for what? History has proven that Big Pharma, Big Media, Big Government (CDC, WHO, FDA) all lied when they declared the “vaccines” “safe and effective.” In fact, Dr. Vladimir Zelenko pointed out that two months before the FDA gave Emergency Use Authorization for the COVID-19 “vaccines,” it was fully aware the product would have serious side effects: “death, heart attack, stroke, blood clots, horrific neurological diseases, myocarditis and many, many more.” The CDC’s own VAERS data, published weekly in The Final Call Newspaper, has the death count at nearly 25,000 and 1,000,000 injuries. They admit this is only a small fraction of the total because many outcomes are not reported.

The people have learned they can reduce the co-morbidities rampant in the Black community such as heart disease, diabetes, and obesity. It only takes a change in diet. Make How to Eat to Live, by The Most Honorable Elijah Muhammad, the central part of our survival kit helps protect us against new attacks. “Vaccines” are depopulation chemicals in disguise.

Why is Gates so anxious to push more gene altering “vaccines” that do not stop transmission or protect you from catching the disease? What’s in these things for us and what is in it for him?

We can thank Deputy Prime Minister of Canada, Chrystia Freeland, also a director of the World Economic Forum, for giving us a peek at the long-term plans of those who intend to control everyone on our planet. She announced, on Feb. 17, 2022, that she will use her emergency powers to cut off funding for the ongoing trucker anti-vaccine mandate protesters by freezing the bank accounts of individual supporters—including Bitcoin and cryptocurrency funds—of Freedom Convoy organizers. She plans to make her emergency powers permanent.

This reminds me of Catherine Austin Fitts’ warning about the “Great Reset” plan of World Economic Forum’s founder Klaus Schwab. In an interview on TheHighwire.com, Ms. Fitts explains what this new economic reality will look like on a personal basis: “You will no longer have a currency. You will have a credit at the company store. If they don’t want you traveling for more than 5 miles from your home, your credit card, your bank account won’t work more than 5 miles from your home.

If they have decided that they don’t want you to buy a pizza, then you can’t buy pizza. You are talking about complete control at a very intimate level of surveillance. And remember, there’s no privacy. They will be able to track every transaction you make. We are talking about a credit at the company store and literally a slavery system.”

The World Economic Forum’s goal is to use the global economic destruction caused by COVID-19 policies as an “opportunity” to “build back better,” where future humanity will “own nothing; and you’ll be happy.” Sounds like communism to me.

This 21st Century Slavery System will operate on the “social credit system” used by the Chinese Communist Party to control their 1.4 billion people. Instead of cameras everywhere, advanced intrusive nanotechnological devices will be administered through the mRNA “vaccines” relay this personal information to a digital “cloud.” The 2020 Bill Gates / Microsoft Patent is “WO2020060606 – CRYPTOCURRENCY SYSTEM USING BODY ACTIVITY DATA”

In common language, Microsoft will use your 5g smartphone to relay everything about your activities in real time to the digital “cloud.” If your “body activity data is verified,” i.e., if you behave the way the modern slave is expected to, you will be paid in the new virtual money known as cryptocurrency, which is already replacing hard cash. If you misbehave, the owner will take it away.

Your body activity, even your emotions, will be tracked with a tiny biosensor implant you received via a shot, possibly disguised as a vaccine. In 2016 a company named Profusa was contracted by the United States Army to develop implantable biosensors that continuously monitor multiple body chemistries. The COVID-19 “pandemic” has provided the opportunity for these self-appointed “masters of the universe” to experiment on the global population enabling them to determine how the body will react to these “Trojan Horses” disguised as “vaccines.”

Now that the people have been acclimated to the “need for boosters,” internal “operating systems,” can be upgraded the same way your phone and other devices update themselves without need for your permission on a regular basis. Ironically it is supposedly to protect your computer from “viruses.”

So, People get ready for the next bioweapons attack. At least now you know WHO is attacking and WHY. The Nation of Islam has warned you for decades. Now the Time has arrived.