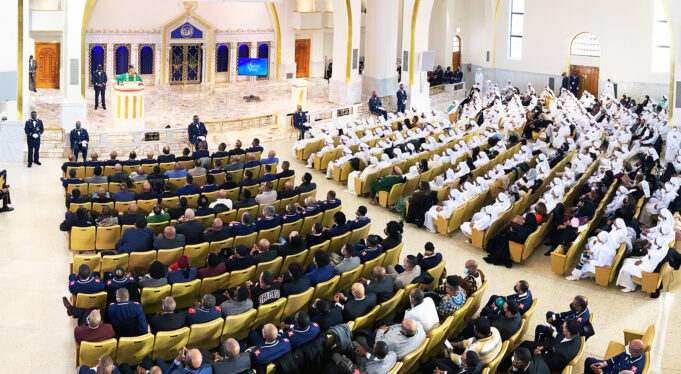 Farrakhan warns that Swan Song signal God’s impending judgement of the nations of the world.

Farrakhan: Swan Song Not Mine, It’s Yours
CHICAGO—In a near five-hour Saviours’ Day message titled “The Swan Song,” the Honorable Minister Louis Farrakhan laid before the world the trials and lessons of his life as a follower of the Honorable Elijah Muhammad.

He advised the audience that following his example of character and obedience to a servant of God, the Honorable Elijah Muhammad, would get them through difficult times ahead.

But contrary to what many believed from the title, it was not the Minister’s Swan Song, but that of those in the audience, those listening over the internet, the U.S. government and governments of the world, depending on their response to the Feb. 27 message.

While most think of a Swan Song as a last appearance or retirement, Min. Farrakhan reminded the audience his time for death is not now.

“You came to hear me sing a swan song. I hate to disabuse you,” the Minister said. “I’m singing a swan song because God is on the scene today and He is the God of righteousness.”

Dressed in a bejeweled emerald green robe and fez and escorted to the rostrum by an FOI on either side, the Minister’s address was heard by more than 4,500 people on the mosque grounds—in Mosque Maryam’s sanctuary and masala, a tent set up on the mosque grounds and the Muhammad University of Islam gymnasium. Tens of thousands more heard the message over the internet.

He warned Black people to clean up their lives to survive the judgement, but also that war is on the horizon that would bring America to her knees.

The war started by Russian President Vladimir Putin with Ukraine will spill over into Europe and America will be drawn in, he warned, at times reading from the Hon. Elijah Muhammad’s monumental book “Fall of America.”

“America doesn’t have a future. Did you think you could kill off millions of Native Americans … take a nation out of Africa and do what America continues to do … that Mexicans who once owned (much of the west) that she doesn’t have to pay for that?” the Minister asked.

“If you don’t repent, you can’t get extra time. The Swan Song is for you,” he said.

The 88-year-old National Representative of the Hon. Elijah Muhammad warned that America will send soldiers off to war by the tens of thousands, but they will return by the fives and tens. Once America is drawn in, the U.S. government will come to arrest him as they arrested the Hon. Elijah Muhammad to prevent him from speaking out against World War II, he said.

“All White power has to end. The Kingdom of God has to be established,” he said.

The life lessons he presented proved him to be a faithful warner with courage to speak the truth and filled with love for his people.

Throughout his 67 years of teaching in the Nation of Islam, Min. Farrakhan has crisscrossed America and traveled the world to take the message of uplift and liberation to oppressed people. He has told unpopular truths that have brought him powerful enemies.

During part of his message, the Minister reflected on Master Fard Muhammad and the Hon. Elijah Muhammad and began softly singing the gospel song “I’m Going Up Yonder” to be with my Lord. The audience joined in and for a brief moment, church was held in the mosque.

Since 2020, with the emergence of the Covid 19 virus, he has warned against taking the vaccine designed by pharmaceutical companies, which he called “a death plot” that stems from a National Security Memorandum of the U.S. Government to reduce the earth’s population by two to three billion people.

Bill and Melinda Gates devised a plan to do that through a vaccine, he said.

“Before the vaccine was made I warned us in the name of Allah that this was a death plot,” he said. “You’ve never seen such a masterful public relations effort to get us to take the jab.”

Birth of a Saviour

Min. Farrakhan said the government never talked to Black doctors about comorbidities in the Black community or tell Black people about the perils of too much salted or sugary foods, which cause some pre-existing conditions.

Instead, they went to Black doctors who wrote a letter—not to curb obesity or high blood pressure—but to encourage you to take the shot, he said.

“You are being betrayed by those who love you, but their love is not deep enough,” he said.

The Minister noted that communities like the Amish never took the vaccine and developed herd immunity. He told the audience he and his wife Mother Khadijah contracted the disease and therapies like Ivermectin and monoclonal antibodies were effective.

Suspiciously, there were complaints by many who viewed the broadcast via the internet, that platforms experienced technical difficulties and blackouts when Min. Farrakhan began to talk about the vaccines.

Saviours’ Day is held annually to celebrate the 1877 birth of Nation of Islam founder Master Fard Muhammad, the Great Mahdi of the Muslims and Messiah of the Christian faith. He revealed Himself in 1930 to his top student, the Hon. Elijah Muhammad, in the ghetto community of Black Bottom, Detroit, Michigan.

For three years and four months, he taught his student night and day and gave him “the hardest job ever given to a human being on the planet.”

That job is to raise mentally and spiritually dead Black people who were “stripped of our own humanity” through slavery.

“You are a generation born from ancestors who came through the roughest of times … who died longing for a generation who would stand tall,” Min. Farrakhan explained. “We learned prayer the hard way. We came up the roughest side of the mountain, but here we are, the strongest of the strong.”

Through Messenger Muhammad’s teachings, the Black man and woman began to move to a different tune. The drunkards traded in their bottles and the dope man put down his pipe for a structure that began to teach who Black people really are, he said.

Elijah Muhammad’s mind was on raising you and I up from where the White man put us, Min. Farrakhan said. “But you are too comfortable in iniquity. We sin like we breathe. We sin and love it.”

He noted that the enemy talks about Elijah Muhammad’s students, but never mention the teacher. He reflected on how Malcolm X and Muhammad Ali didn’t stay in the class, and how Imam W.D. Mohamed didn’t attend the class.

It was Min. Farrakhan who picked up that baton, but because powerful members of the Jewish community put pressure on Black leaders, “some of you love the Minister but you can’t come too close … you can’t talk about me in certain circles,” he said.

“The enemies of Jesus were Jews … and there were Gentiles, too. But it was the Jews who received so much from God in the way of knowledge and then they turned away from God” and used their knowledge to trick people into sin, he said.

“I really want Jewish people to hear me,” he continued. “I want you to understand that prophets of God aren’t your enemies. They are your correctors. Don’t tell me you are so arrogant that God can’t send somebody to correct you.”

The Minister said he has made the name “Farrakhan” a great and respected name because he has followed the God who made him. He warned family members and those who have taken on the name that they must be of good character.

The devil will use your transgression of the law to disgrace you, but it’s really me that he’s after, he warned.

The Honorable Elijah Muhammad, in a Sept. 17, 1985, vision-like experience, gave Min. Farrakhan instructions to reveal to then-President Ronald Reagan of his (Reagan’s) meeting with his Joint Chiefs of Staff to plan a war against a Muslim nation. After that, there would be one more thing to do before the Minister would be allowed to come back and see Elijah Muhammad face-to-face.

As a result, Min. Farrakhan delivered the message during a press conference, and he helped Libyan President Muammar Gadhafi to avoid assassination by U.S. bombs by warning him of an attack. He also called for a Million Man March attended by nearly two million men.

Since that time, he’s been doing “every one more thing I knew.” He said he finally realizes that the “one more thing” is betrayal that leads to crucifixion.

Safiyyah Muhammad from New York felt comforted to see the Minister. “He was so graceful and the words he gave us were so timely. It just gave us a lot of comfort in these troubled, troubled times,” she said. She took notes of the lecture on her phone. What stood out to her was Minister Farrakhan’s words that Allah is not a coat you can just put on when it’s cold outside. “He has to be with us at all times. It’s not just when you need Him. We always need Him,” she said.

Ryan X from Muhammad Mosque No. 60 in Nashville, Tenn., was excited and amazed at the turnout and the packed audience. “Everybody thought the Swan Song was about the Minister’s going, and he turned it around. He’s talking about the Swan Song, singing us a Swan Song to keep us from dying, giving us life, giving us points to survive,” he said.

Twitter was ablaze as reactions to the words of @LouisFarrakhan poured in: “The lengths they go through to try to silence Minister Farrakhan is wild, it’s also extremely telling. They’re deathly afraid of him and the unity his words bring to our people, that much is clear,” observed @ericaleshai. @MrsFarrakhan added, “The Minister talked for almost 5 hours. He gave clear warnings, none the least of which is if we continue living in iniquity, it will result in our death. We need to get right. We also need to get rid of those who refuse to get right. Do what you want but I’m taking that advice!”

From South Africa, MasunguloNdlov1 tweeted: “From our timescale in SA the Minister spoke around 10pm and continued to 00:00am, sadly I was very sleepy and I unfortunately couldn’t hear it all But I’m thankful for the little that I’ve heard because that little faith and love of mine is enough to get it all PEACE. #Farrakhan”

@BigBrothaTee added, “I am processing the coordinated effort of @YouTube, @Meta, @rumblevideo, and whoever stopped access to @NFAstudios to stop us from hearing the uninterrupted word from Minister Farrakhan.”

On the popular ClubHouse App, moderator MikeyJet$ was hard at work. With the Minister’s message being widely blocked, MikeyJet$ and crew refused to be defeated. As soon as one line of audio transmission fell, MikeyJet$ and other moderators found another and another and another. As one moderator said, “They were working hard to shut him off. He’s talking to all melanated people. This man speaks the truth. We all suffer from the same oppression,” she added. It was a win for #Truth and #Farrakhan and loss for #Satan and #WhiteWorldPower.