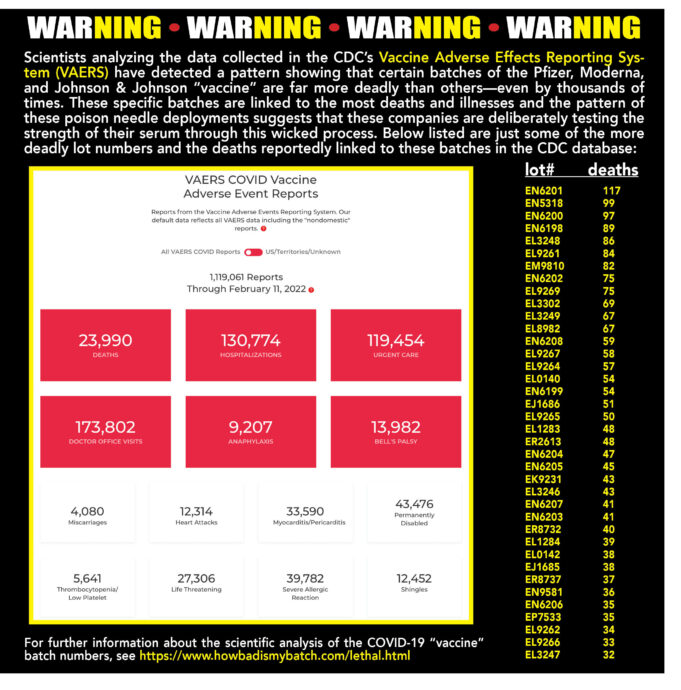 The COVID-19 “pandemic,” as it progressed, revealed that Black people succumbed to the virus at a much higher rate because of pre-existing conditions known as “co-morbidities” because they had an equal or greater role in causing death: obesity, diabetes, heart failure and kidney disease. All of these conditions are primarily produced by eating the wrong foods.

We later found out that the only FDA-approved and CDC-recommended drug used by hospitals for the virus was Remdesivir, a product which has been proven to attack the kidneys. Dr. Mark Hyman has pointed out that Black Americans are “four times likely to have kidney failure.” Remdesivir was the equivalent of throwing gasoline on a fire.

Dr. Hyman also noted: “When you look at the data from the ‘60s, African Americans were among the healthiest groups of the population, in fact, far healthier than whites, and now, it’s the opposite.” So, what happened?

Immediately after the end of chattel slavery (1865-1910), Black people purchased 16 million acres of land. Robert Preston Brooks, who authored the 1914 book “The Agrarian Revolution in Georgia, 1865-1912,” was one of the first Rhodes Scholars and first dean of the School of Commerce at the University of Georgia (1920-1945). He wrote,

“in 1910 they [Blacks] were assessed for taxation in Georgia on $32,234,047 worth of property, including 1,607,970 acres of land … Any influences which would tend to increase his wants are to be welcomed. He needs larger desires and the pressure of competition for work.” In other words, whites were threatened by Blacks saving their money to buy farmland along with the fact that we did not “want” the goods whites were offering.

We must understand that during slavery Black people did everything for southern whites. We were the producers; they were the consumers. We grew the cotton, raised, and cooked their food, built their homes, made their clothes, built their buggies, fed their animals, shoed their horses. So, when Black slaves were let go to fend for themselves, they were masters of “do for self:”

Freedom to how to take care of themselves was “heaven.” Whites rushed to institute all types of “Jim Crow” laws to stop the rise of a Black economy. In some states we were forbidden to sell farm products like flour, cotton, hay, rice, peas, wheat, etc., without the written permission from a white man, thus disallowing Black agri-business and eliminating Black competition.

By the late 1950s Black people still owned 12 million acres of land. The government enlisted the help of a prestigious think tank in 1962, the Committee for Economic Development, to devise a plan to finish removing us from the land with the so- called “Adaptive Approach” wherein the government would reduce farm commodity prices but give white farmers subsidy payments to stay afloat and eventually buyout Black farmers who were left to sell their products at a loss. The plan worked. Black farmland has now dropped to 2.5 million acres.

Black people moved to the cities and a diet of fast foods and processed foods. Dr. Hyman further pointed out that after Dr. Martin Luther King, Jr. was killed in 1968, McDonalds looked for Blacks to own fast food franchises as a way to gain a piece of the American economic pie. McDonalds and Coca Cola are still heavy donors to the NAACP and Coca Cola supports the King Center in Atlanta to seal Black people as customers. But there is a health and social cost that has come with fast food and processed foods becoming the standard Black diet.

Dr. Hyman revealed that The Rockefeller Foundation produced a report about the true cost of food. It is three times the cost of the actual money paid at the checkout counter in terms of its effect on health, on the economy, on climate, on social justice issues. 60% of the calories Americans eat are processed food. 67% of the calories that children eat are processed food. 75% of food stamps are spent on processed food and 10% on soda. According to the CDC, African Americans eat more fast-food than any other group of the population. The prevalence of obesity in the U.S. among adults skyrocketed from 13.4% in 1980 to 34.3% in 2008.

While Blacks were being run off the land and herded into cities to be fed poisoned processed foods, the Honorable Elijah Muhammad and the Nation of Islam were buying land: 5,000 acres of land in Georgia, 8,000 acres in Alabama and 20,000 acres in Honduras. He was setting up grocery stores, bakeries and restaurants. In 1967, he published “How to Eat to Live: From God in Person, Master Fard Muhammad.” In his book he taught us to reduce our meat consumption. However, the fast-food industry was designed to keep our bellies full with processed and adulterated hamburgers at McDonalds, Burger King, and Wendy’s or fried chicken at Kentucky Fried Chicken and Church’s Chicken.

In the 1960s Black people were given a clear choice, separation or integration, real food or processed food. Most chose integration and processed foods. Now we are experiencing the “Burning house” that Dr. King warned us about after he woke up. We are being led by Bill Gates and others from the frying pan of fast and processed foods to the “Brave new world” of “cultured meat (synthetic food).”

Last March, Congress passed a sweeping debt relief program for “farmers of color.” The law would have provided $4 billion worth of debt relief for loans many of them had taken on to stay afloat while being passed over for financial programs and assistance their white counterparts had received.

Although Black farmers made up only about a quarter of those targeted in the bill, white farmers in Texas went to court to stop Black farmers from receiving any debt relief. The super-rich have deceived poor white folks worried about what poor Black folk might get. Meanwhile, they too are being poisoned by their own kind and their liberties taken away by their own government under this COVID-19 “pandemic.”

While white farmers focus on Black farmers, Bill Gates has become the largest individual farmland owner in America, with 242,000 acres and growing! At the same time, he is one of the major investors in synthetic “meat” grown in the laboratories of “Beyond Meats” and “Impossible Foods.” Gates plans to take land out of production while he pushes synthetic “meat.”

Gates is also working with the Department of Defense to weaponize crops by genetically modifying them to become edible mRNA “vaccines.” This is to overcome “vaccine hesitancy” among the awakening public. In other words, they plan to sneak these things in you when you eat a “happy meal.”

These genetic manipulators will be feeding you synthetic foods and gene altering “vaccines” which will destroy your natural immune system. You will depend on somebody behind a computer screen to feed you and keep you alive. Blacks have experienced chattel slavery enforced by the whip and the gun. The New World Order slaves will be controlled from the inside by nanotechnology and digital currency.