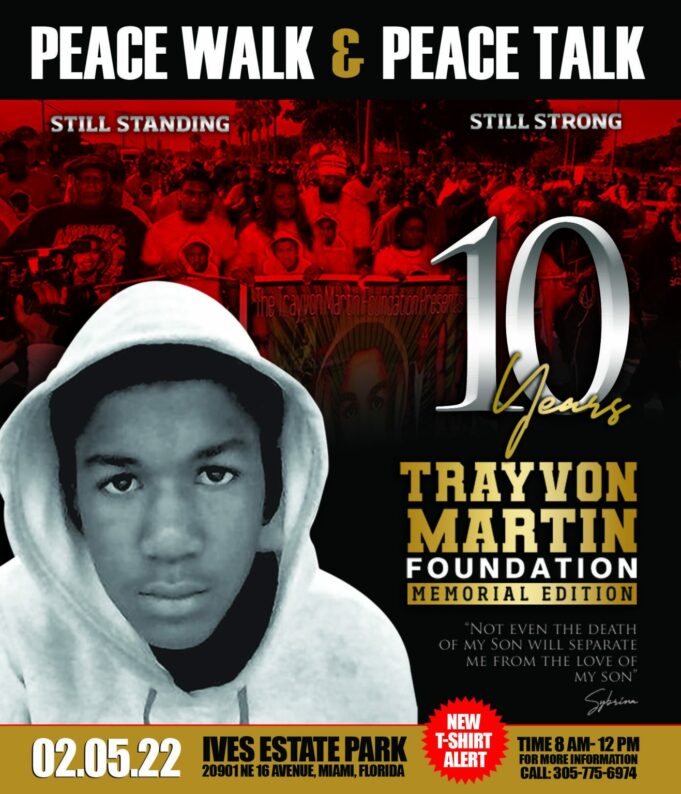 “You learn how to cope after the loss of your child, but you never get used to it.” These sentiments shared by Tracy Martin are just as poignant and palatable today, a decade after the painful and devastating killing of his son Trayvon, whose name and case became nationally and internationally known and sparked a social justice movement. “There’s always a feeling of anger, and feeling of hurt, when you have something that triggers a memory of them,” Mr. Martin told The Final Call.

February 26 marks 10 years since George Zimmerman, a White Hispanic man claiming to be a neighborhood watch captain, confronted then fatally shot the unarmed Black teenager as Trayvon was returning to his father’s home from purchasing snacks from a store in Sanford, Fla.

It shocked and angered a country that in 2012 was nearing the completed first term of the nation’s first Black president, Barack Obama. Yet for Black America, the reality of racism and police brutality never disappeared. Trayvon Martin’s case ripped a band aid off of a brutal reality many Black folks feared, faced and lived for decades.

“He was cheated out of his life, and so, there’s always going to be some form of resentment and anger inside of me. But at the end of the day, I also feel blessed to have enjoyed 17 years on this earth with him,” said Mr. Martin.

In the last 10 years he has become better overall—a better listener, husband, and people person, with greater understanding of other people’s needs, not just his own, he shared.

He said he feels blessed to be able to give young brothers and sisters some guidance, knowledge or just a little tutelage on things they’re experiencing in life.

“I kind of feel the little bit of emptiness that was taken away from me when Trayvon was taken. I feel some of that emptiness with just being that outreach, just being that tool or that shoulder for our younger brothers and sisters to lean on and converse with; just being able to guide some of these young guys in the right direction, or just talk through certain situations with them,” stated Mr. Martin.

The killing of Trayvon ignited anger and a movement to protect Black lives but in 10 years since that fateful night, what has happened since this young martyr was taken and what impact has it had on the Black struggle?

The 10th anniversary of Trayvon’s death was marked by reflection, resilience, and a resolve to inspire new generations to fight for justice through cultural, social and political activism.

Sybrina Fulton, Trayvon’s mother, reflected over lessons learned in the last decade and found herself thinking about the racial justices that continue through today. She spoke through “Trayvon: Ten Years Later: A Mother’s Essay,” released on Feb. 1.

“Every time someone is murdered, it’s a reminder that someone’s child, sister, or brother is being taken from us in the same way my son was taken from me,” she wrote.

Ms. Fulton began working with various sectors in communities from victims, families, and legislators, to release her anger through healing hearts and saving lives. “I have learned and experienced a great many things about life, love, and loss. More importantly, I have learned the power of my own voice. It’s been 10 years and I am still finding my way through it,” she continued.

Her family’s efforts through The Trayvon Martin Foundation, helps. Every year they host the Trayvon Martin Peace Walk and Talk. This year’s free community event at Ives Estate Park in Miami, Florida, was held Feb. 5, Trayvon’s birthday, and featured motivational speakers, local band performances and fun for the entire family. The dialogue highlighted the way their son has impacted the Black community in his young life, before George Zimmerman stalked, terrorized, then shot him on Feb. 26, 2012.

Beyond the effect on his own family, Trayvon continues to have an impact on the Black community, across the country and worldwide.

Trayvon was a catalyst for the nationwide movement for Black lives and launched social justice groups and rejuvenated protests and marches to demand justice. As other cases of police and vigilante killings of Black men, women and children followed—such as 12-year-old Tamir Rice in Cleveland, 18-year-old Michael Brown Jr. in Ferguson, Mo., Philando Castile in Minneapolis-St. Paul, Breonna Taylor in Louisville, George Floyd in Minneapolis, 17-year-old Jordan Davis in Jacksonville, Fla., and countless others—it was Trayvon’s case that helped propel a movement.

His case also elevated what Black women have endured when it comes to the unjust murders of their sons, daughters, husbands, and themselves at the hands of White cops and vigilantes.

“The loss of a child is a pain that’s unimaginable to those of us who are blessed to still have all of our children. … We have to constantly acknowledge that pain, lift Sister Sybrina and the entire family, and recognize that she was pulled into a kind of leadership that no one would ever sign up for. No one would ever want to be this kind of leader. She wouldn’t trade her son for anything,” stated Dr. Melina Abdullah, co-founder of Black Lives Matter LA Chapter, founded in 2013 in response to the acquittal of Trayvon Martin’s killer George Zimmerman.

“Trayvon Martin was not the first person or teenager to be stolen by a White supremacist, but there was something about his spirit and his family’s spirit that ignited an entire movement. It was the acquittal of the person who dared steal his life that ignited Black Lives Matter, and I’m grateful for that calling,” said Dr. Abdullah.

She expressed gratitude for the way that not only Ms. Fulton has served, but Trayvon’s and so many police violence victims’ families have stepped into the movement for justice.

Nationwide protests ensued after Mr. Zimmerman was acquitted. By 2019, protests weren’t as big as in 2013, 2014, noted Dr. Abdullah, but rose again in 2014, when Darren Wilson, a police officer offer in Ferguson, Mo., killed 18-year-old Michael Brown, Jr. The cop was never even charged in the fatal shooting.

Trayvon’s death also shifted the trajectory of how Black women responded to the unjust killings of their children and husbands. It propelled Ms. Fulton into political activism, and in 2020, she ran for Miami Dade County District 1 Commissioner in Florida.

Rep. Lucy McBath (D-Fla.) became a gun safety advocate and ran for Congress after her son Jordan was senselessly shot and killed in 2012 at a gas station in Jacksonville, Florida, by a White man objecting to the music Jordan was playing in his car.

“We’ve always said that Trayvon is a modern-day Emmett Till,” said Mr. Martin, referring to the Black 14-year-old brutally beaten, tortured, and shot by a group of White men in 1955 in Money, Miss., and whose open casket at the insistence of his mother Mamie, launched the civil rights movement.

Trayvon’s case profoundly affected the Black community and helped galvanize a youth movement against police crimes, according to Frank Chapman, executive director of National Alliance Against Racist and Political Repression.

“That’s how the Dreamers came about, the Black Youth Project came about. That’s how Black Lives Matter was agitated into existence, because the young people were heavily impacted by that. They knew what it was. It was a 21st century lynching,” Mr. Chapman told The Final Call.

What further outraged the Black community is that police in Sanford, Fla., initially didn’t arrest Mr. Zimmerman, until people protested. “They took him to the police station and asked him a couple of questions. He gave his version of what happened, and they let him go, without any investigation,” said Mr. Chapman.

“This outraged us. This outraged everybody in the country that’s Black, that relates to the historical experience of us being lynched,” he continued.

Ten years later, the same fight for justice is still being waged. It took protests to bring any attention, arrests, charges and much less a trial or conviction in most of these types of cases after Trayvon. His case also propelled civil rights attorney Ben Crump into the spotlight. He continues to represent family and loved ones of Blacks killed or abused by law enforcement or White vigilantes.

“We see over and over again, how they assassinate our children’s character, but will do whatever it takes to defend the character of young White children,” said Atty. Crump, who represented Trayvon’s parents and worked to keep the case in the public eye.

“You only have to look at how they portrayed Trayvon Martin, who was 17, who didn’t have a gun, was unarmed and had committed no crime, and how they portrayed Kyle Rittenhouse, this 17 year old White boy, with an assault weapon, that was dropped off by his mother at a rally who killed three unarmed people,” he argued, referring to the case in Kenosha, Wisc. Mr. Rittenhouse was portrayed as a scared, young man who was simply defending himself during protests in the aftermath of another shooting of a Black man, Jacob Blake. Mr. Rittenhouse was acquitted late last year. The officer that shot Mr. Blake was not charged.

Controversial “stand your ground laws” were also called into question after Trayvon’s killing and pointed out glaring racial disparities in such legislation.

Trayvon’s death 10 years ago is still very painful and traumatizing for Beatrice X Johnson, co-founder of “Love Not Blood Campaign,” which assists families affected by police violence. She thanks God that Trayvon’s name has not died, and that people have not forgotten him. Beatrice X said she’s grateful when there’s a court victory, but there’s still so much work to do. “They’re still trying to kill us. They’re still trying to take us off the planet,” she said.

It propelled them to continue to do the work, said Mr. Johnson. He and his wife moved throughout the country, attempting to visit every family touched by police violence they could. There has been some progress since Trayvon’s death, in terms of holding killer cops accountable, he noted. That’s a testament to the work of many activists across the country, but there’s still a long way to go to expose the heinous racism of the criminal justice system, he admitted.

“This criminal justice system has to be broken down and organized in such a way that everyone has real freedom, justice and equality,” argued Mr. Johnson.

Blacks as a people have some decisions to make, and if they don’t make the right decision, they’re going to continue to repeat what is a vicious cycle, stated Demetric Muhammad, a Nation of Islam student minister, author, and researcher.

“This week’s news cycle included the police officer (Jason Van Dyke) who killed Laquan McDonald in Chicago is becoming a free man after only doing a few years in prison, but Laquan is dead,” stated Min. Demetric Muhammad.

He thinks that characterizing Trayvon as a modern-day Emmett Till is appropriate, because Till’s murder ushered fourth an awakening, “especially among the youth.”

The problem with saying that Trayvon is a modern Emmett Till, the Memphis-based student minister continued, is the fact that we should not need a modern Emmett Till. “How many more modern Emmett Tills are we going to need in order for us to resurrect and to unite and to form ourselves into an independent nation, which is the will and the desire of God?” he said.