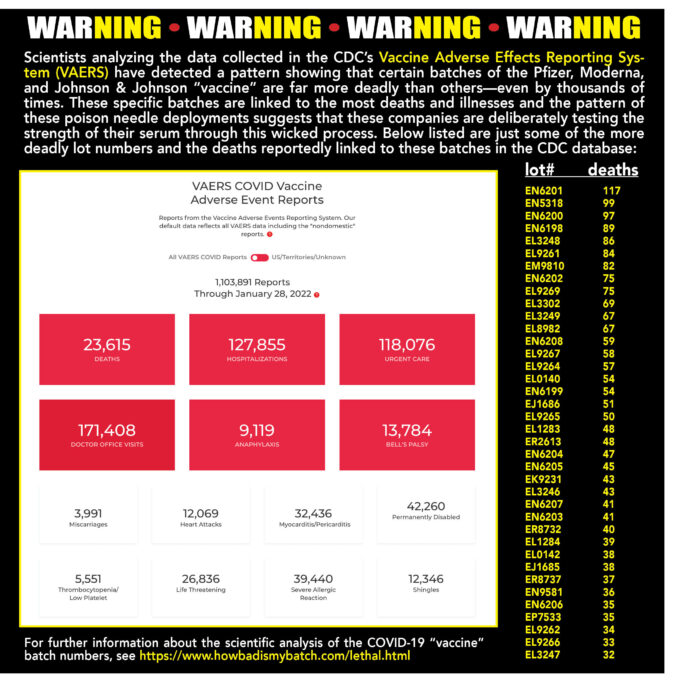 “My teacher told me, don’t speak to some, speak to the whole. I’m speaking for Black America, for Hispanic America, for the Native American and for those who are desirous of life. They’re making money now plotting to give seven billion five hundred million people a vaccination. Dr. Anthony Fauci, Bill Gates and Melinda, you want to depopulate the earth? What the hell gives you that right? Who are you to sit down with your billions and talk about who can live and who should die?” —Honorable Minister Louis Farrakhan July 4, 2020, The Criterion

The leadership in each of these nations gave reasons for rolling back the COVID restrictions, but they all generally agree with the Swedish Public Health Agency’s reassessment of COVID-19 as “not being socially critical” due to a better understanding of the Omicron variant which is milder and associated with fewer hospitalizations. At its peak the virus only had an overall 1% mortality rate. “It’s time to open up Sweden,” said Prime Minister Magdalena Andersson. “The pandemic isn’t over, but it is moving into a new phase.”

Denmark has reclassified COVID-19 as an “endemic” disease instead of a “pandemic” disease. This means we can expect new variants of the disease each year like with the common cold and the flu. Hidden beneath this changing of terms is the fact that these so-called “vaccines” have failed to protect the people from the COVID-19. In fact, reports from Israel, which has the highest vaccination rate in the world, is that the vaccines seem to enhance the possibility of people catching this “new variants” instead of protecting them from the virus.

Minister Farrakhan warned those who were developing these so-called “vaccines” that they would not be able to keep up with the mutations of this “pestilence from heaven” and therefore their vaccines would prove worthless against stopping the disease. Instead, he announced that there were 14 treatments or remedies that could be used by the people to combat the disease. Now, reputable research universities, like Duke University, are finally taking a serious look at one of these therapies, Ivermectin, which has been overwhelmingly successful in combating the disease.

Following Minister Farrakhan’s announcement on July 4, 2020 that there were therapies that could be used to fight the virus, the WHO, CDC, FDA, corporate-owned mass and social media went on a witch hunt to scare the people away from these remedies. Instead, they sent the sick home instructing them to stay there until they became breathless and blue in the face, then come back to the hospitals to be misdiagnosed and killed with Remdesivir and ventilators. These deaths were charged to the virus and the people were herded into stalls to receive kill shots masquerading as “vaccines.”

Recently, people have been strongly protesting the baseless restrictions and mandates that have destroyed economies, lead to suicides, increased preventable illnesses, to name a few. In poorer countries, there have been deaths by starvation caused by disruptions in the food chain and the lack of jobs. Until recently, the governments like the U.S., have come down hard on those who refused to get vaccinated and have deliberately tried to blame the unvaccinated on spreading the new variants to the vaccinated. Wait a minute— if the vaccines were working, the vaccinated would be protected and feeling sorry for the unvaccinated, not hating them.

But now, both the vaccinated and unvaccinated are joining forces against these draconian and unlawful government mandates and restrictions. A complaint of crimes against humanity was filed on December 6, 2021, at the International Criminal Court in the Hague. This complaint specified named defenders including the chief lawmakers in western countries, heads of the major pharmaceutical companies and health agency heads around the world. It is no wonder that leaders like Prime Minister Boris Johnson of United Kingdom and others are rolling back the restrictions and mandates. They feel accountability breathing on their necks.

The only way these criminals who have orchestrated all of this death and economic destruction can get away is if they can start civil wars—getting the people to divide and fight each other—like they have repeatedly done in Africa. Then these governments can bring in UN “peacekeeping” troops to restore order and kill the “troublemakers.” Divide and conquer is what their Maker, Yakub, taught them 6,000 years ago.

That is the tactic we should expect the governments of the western world to employ to protect themselves from the anger of their own citizens. This is why a short video developed by the supporters of the truckers’ protest in the Canadian capital is so crucial. This video has the voice of Canadian Prime Minister Justin Trudeau lying, charging hateful speech and actions on the part of the truckers, while at the same time the video shows scenes at the protests where the people are singing, dancing, hugging each other and even “high-fiving” the police.

Why is there now this standoff between the governments of the western world and their citizens over these so-called vaccines? We have to go back to July 4, 2020 when the Honorable Minister Louis Farrakhan announced in “The Criterion” that the African leaders should not allow these new vaccines into their countries and that the Nation of Islam in America would consider it a declaration of war on all of us if the U.S. government tried to physically force these experimental vaccines. The “vaccines” that had not even gotten Emergency Use Authorization (EUA) yet. White people had to wonder, “What does this man know about white people and what they are about to do? What will be in these new vaccines?”

The Minister issued a directive: “I say to those of us in America, we need to call a meeting of our skilled virologists, epidemiologists, students of biology and chemistry and we need to look at not only what they give us, we need to give ourselves something better.” And sure enough, white scientists and medical doctors began to investigate what was really being prepared in these government financed and protected laboratories, responding like the jinn (Surah 21:82) who went to work for Solomon to dive for pearls.

When these so-called vaccines were given Emergency Use Authorization (EUA) by the FDA in late December of 2020, many American people took the shots based on government sponsored propaganda, fear and duress, believing that the government would allow things to “get back to normal” and they could keep their jobs. But after Time began to expose the lies about the effectiveness and safety of these shots, their trust began to wane.

When the governments turned to force their children to jab them these shots, it was the proverbial “straw that broke the camel’s back.” The citizens of the world not only want these vaccine mandates, restrictions, and passports to stop, they want the perpetrators of this fraud and crimes against humanity brought to justice and punished, using the example of Nuremburg Trials after WWII.

The people will not forget how they have been deceived and murdered by their own governments. Now the world awaits the voice of a true leader they can trust to lead them through these dark hours of global genocide. That Leader and Voice is the Honorable Minister Louis Farrakhan. We await his message, “The Swan Song,” to be delivered Saviours’ Day, at Mosque Maryam on February 27, 2022.