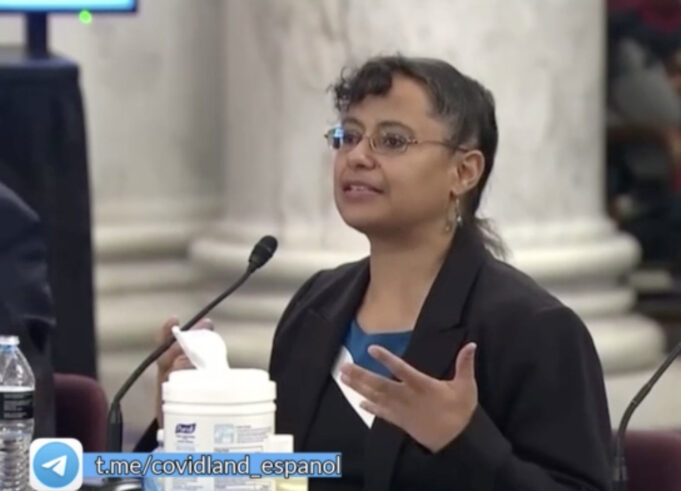 Part 1 of an Exclusive Interview

Dr. Christina Parks is an educator, researcher and scientist who gained widespread recognition following her appearance before the Michigan State Legislature on August 10, 2021. Poised and courageous, she advanced the position that Covid-19 vaccine mandates are unscientific, racist and discriminatory. She won our admiration when she used her superior communication skills to indict the abuse of science and clinical medicine.

She won our hearts with her charge that the unvaccinated are victims of blatant human and civil rights violations. Dr. Parks has continued to speak on the dangers, as well as the ineffectiveness of the vaccines. She has become a controversial figure because of her stand on truth. Nevertheless, this wife, mother and teacher remains undeterred as she joins the growing ranks of soldiers for justice who are banned from social media platforms.

Dr. Parks recently granted an interview with me. Over a period of several hours, she graciously shared her insight and manifested her deep spirituality. Minister Farrakhan, a Servant of Allah (God), declared the Covid-19 vaccine “death” while it was still in development. He also called for our scientists to analyze the vaccine. Dr. Parks not only possesses impressive credentials specific to the task, her fearlessness in educating the public about the vaccines is invaluable.

Here are excerpts from Dr. Park’s powerful and insightful observations on Covid-19, the government’s “pandemic policies” and other issues of importance to the Black community:

A Declaration of War Against All of Us

I do believe we have the right to reject injecting anything into our body. That’s the first thing. But beyond that, these are so dangerous. It is, I believe, an act of war against people.

I think that the idea that there is massive depopulation going on is too psychologically stressful for many people to cope with. So they would rather choose to what I’ll call ‘stay in the Matrix,’ and not see evidence that’s right in front of their face. … The science clearly shows us that this is going to be a mass depopulation event. How big or small it is, I don’t know. I know that God is in control. And so, whatever their intentions are comes up against what His intentions are.

I’ve actually been asked to speak by a lot of Patriot groups, which are sort of Trump supporting groups in Western Michigan. And it’s interesting to me that many of their views, in some ways, mirror the Nation of Islam. When I became aware of the Nation of Islam and years ago, there’s this idea that it’s this separatist movement that is separate because it’s racist. And of course, there’s some it that’s uncomfortable, and some people saw it that way.

I actually brought up one of Brother Malcolm’s speeches the other day, and I almost did a double take. And I said I know many people, some of his rhetoric was too strong for them, but if you replace the word “White Devil,” with “Deep State,” it plays exactly clean for this day and age. And you could give it to your average Trump- supporting White middle class person, and they would say, ‘Oh, yes! That’s exactly what I believe!’

Minister Farrakhan’s Call for ‘Something Better’

That’s exactly what my intent is. And it’s a complicated environment because there’s many different political forces. I think we all need to pray that God would lift up those whose hearts are true, and bond them together for this goal, because the endpoint is just too important to allow differences of political opinions, and just all of the drama that usually ensues, egos, whatever it might be, to stop us from reaching this goal.

I think that I set it in His hands and hopefully take one step at a time and see what He does. This is not just like, throw something at it. It’s a very complex process, and I’m just at God’s disposal to use in this and hopefully, He will open the doors, and the scientists themselves are extremely excited about moving forward.

I know people were concerned about possible chemical contaminants on the swab. I was concerned that they were sticking it way up by your brain. That just didn’t seem necessary at all. Why are they using these particular procedures without any explanation for why? And if you have a child or even a teenager, that’s a very sensitive area way up in there near your brain or whatever? Why would you want them to do that?

If anything, this is spread oral, fecally and so you could just get a sample from your rear end, and that would actually give you all the information that you would need. And that’s not really very invasive. It might be personally invasive, but it’s not going up near your brain or anything. … What PCR does is it amplifies genetic information. It can’t tell you if the virus is live or dead. The virus could be dead.

Who trusts the government now anymore? Is the test getting your genetic information? Are you sending that to the government? It’s very skeptical. Now, if I can get it at home, and I don’t want to send it to anybody, maybe that’s okay. But I’m pretty skeptical of anything from the government, unfortunately. I would want it from a private industry, that’s not involved in the government, but I don’t even know where you find that anymore, since they all seem to be so intertwined.

First of all, there was never any question about whether masks work. They don’t. They’ve always been known not to work, because viruses are so teeny tiny, they get in all of the little areas, and then when you put on a mask, you’re sucking air in more forcefully. So, you’re bringing it from further away. You’re actually more likely to suck virus in, and then if you’re blowing it out, you’re more likely to shoot it further, just like when you put your thumb on a hose.

Truth is rising. And I think one of the reasons I was a strong advocate for Rizza to speak at the Stop the Mandates rally, was that his voice needs to be heard, and he’s earned it. He’s earned that authentic engagement. And certainly, some mainstream people were very interested. They didn’t know he existed. And they were like, ‘Who is this person?’

I think that it is critical that not just the Black community hear his voice, because he elucidates his case, he speaks his case for the Black community, for his vision, so clearly, with such grace, with such love, but with such forceful power and no compromise, that many people will understand after hearing him and that will bring many strong alliances.