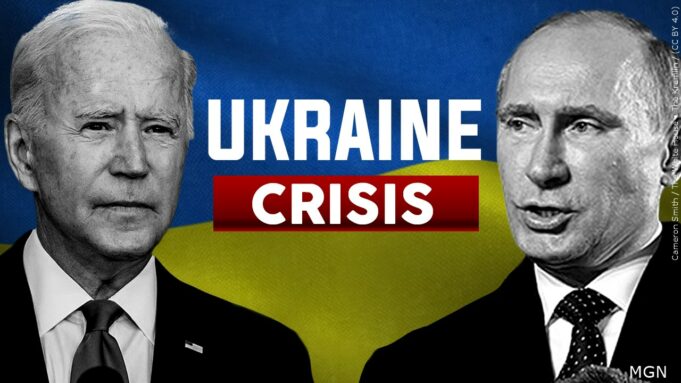 WASHINGTON—Sounding the drumbeats of war, President Joe Biden has ordered 8,500 U.S. troops to be on heightened alert for possible deployment to Eastern Europe, as the dangerous escalation at the Russian/Ukrainian border standoff intensifies daily. The Pentagon has warned that there is the possibility of sending as many as 50,000 troops into any conflict.

The knee-jerk Congressional and corporate-owned media response has been predictable. Democrats in Congress proposed the “Defending Ukraine Sovereignty Act of 2022 (H.R. 6470/S. 3488),” with a $500 million price tag, on top of the millions of dollars in weapons already rushed to Ukraine by the U.S., the United Kingdom and other NATO allies. There is resistance, especially among Black activists, even though this potential conflict is in Europe, not in Africa or Asia.

“The Democratic Party seems to (have) become the party of war,” Netfa Freeman with the Black Alliance for Peace told this writer in an interview. They “want to justify and rationalize and also distract from the ineptitude and neglect of this government to deal with its domestic problems: the pandemic; the rising, what we might refer to as police state tactics against working class poor people, particularly Black and Brown people in this country. It’s just a distraction from the failures of the Biden Administration.”

“Biden really withdrew troops from Afghanistan just to deploy them to Eastern Europe,” tweeted CodePink in response to the news. “The priorities of the U.S. clearly haven’t changed. It will take a massive anti-war movement to end this!”

“What have we seen from the U.S. corporate media?” Sean Blackmon with the ANSWER Coalition told a hastily arranged rally in Lafayette Park, across from the White House on Jan. 27. “They have been out of their minds with the drumbeat of war. And so, we see that there is no real voice of peace inside this U.S. government. Democrats, Republicans. We know that war and imperialism is a bipartisan issue.”

There has been only a trickle of support on Capitol Hill. “Instead of spending $500 million on weapons, we should be centering civilian needs with refugee and humanitarian assistance,” Rep. Ilhan Omar (D-Minn.) said in a scathing report issued Feb. 3. The proposal now working its way through Congress “escalates the conflict without deterring it effectively,” Rep. Omar said. “When the United States says it champions human rights, democracy, and peace, we should mean it.”

In addition to the 8,500 troops placed on high alert, the Pentagon announced that it would send 3,000 troops to three NATO nations in Eastern Europe amid accusations by Russian and Ukrainian officials as well as anti-war advocates that the U.S. is escalating tensions in the region.

Mr. Biden directed the Department of Defense to send troops to Poland, Germany, and Romania after meeting with Defense Secretary Lloyd Austin and Chairman of the Joint Chiefs of Staff Mark Milley on Feb. 1. According to Pentagon Press Secretary John Kirby, the deployment is “appropriate, defensive, and non-escalatory” and was in response to the 100,000 troops Russia has assembled at the Ukrainian border.

“It’s important we send a strong signal to (Russian President Vladimir) Putin and frankly to the world that NATO matters to the United States and it matters to our allies,” Mr. Kirby told reporters Feb. 1, this, despite the fact, as a reporter pointed out to Mr. Kirby, NATO nations have not voted on the decision to deploy troops.

“A big part of this whole narrative has been characterizing Russia as the aggressor,” Mr. Blackmon told the Jan. 27 rally. “Why? Because they assembled their military forces inside their own borders. But how is Russia the aggressor? How many Russian military bases are surrounding the United States? None.

“It is the U.S. and NATO that have made it a point to surround Russia,” he continued. “Shut down AFRICOM. Shut down the 800-some-odd military bases and installations that the United States has all across this Earth, and not you, not me, not anybody gets any more security with these bases. The only thing that’s being protected are the profits of the war profiteers, our wealthy, elite, and the political ruling class,” Mr. Blackmon said.

“The Black Alliance for Peace is unapologetically opposed to NATO, a White supremacist structure responsible for Black death from the Portuguese colonies in Africa to the racist attack on Libya!” Mr. Freeman continued, insisting that this potential war in Europe is as dangerous to world peace as an attack on African soil would be.

“What I think we should have to understand is that the mobilizations, the militarization the United States has, no matter where it is, is reflected upon the whole world, so it’s not just standing up for the people of Ukraine and for the rights of the people of Russia, but it’s really about humanity,” said Mr. Freeman.

“When we look at what NATO, the U.S., (they) are the ones that we have to think of because, really, (NATO’s) just the extension of White supremacist capitalist, patriarchal dominance, around the world. We also have to remember that it’s the same forces and the same agenda that has destroyed Libya, that has this octopus type presence in Africa through the U.S.-Africa command, with AFRICOM, and all around the world.”

“With a very soft trigger, it vaults Ukraine overnight into the third-highest recipient (behind Israel and Egypt) of U.S. security assistance and weapons sales in the world,” Rep. Omar warned. “The consequences of flooding Ukraine with half a billion dollars in American weapons, likely not limited to just military-specific equipment but also including small arms and ammo, are unpredictable and likely disastrous,” Rep. Omar said.

“And do we really think, that the United States cares about the sovereignty or democracy inside Ukraine?” Mr. Blackmon asked rhetorically. “We know that this war would be catastrophic, not just for us in the United States, not just for Ukraine, not just for Russia, but for humanity itself. So, this independent, anti-imperialist movement has to be the voice of reason.

“This is an issue of humanity,” said Mr. Freeman, “and the more that the U.S. is empowered and feels emboldened to be able to do whatever it wants, wherever it wants, then it’s a threat to all of us, and as not to mention that the more the United States militarizes in other places of the world, it also affects the militarization, the domestic militarization, (which) is pointed and targeted mostly at our communities here in the United States.

“The public in the United States is bombarded with so much false information and lack of historical context that we hope that this is making a difference, and in fact what we do know is that the public is not as gullible as the forces to be hoped they would. The only difference is they probably just don’t know what to do about it,” Mr. Freeman said, insisting that concerned persons organize, or join a radical organization opposed to U.S. militarization.