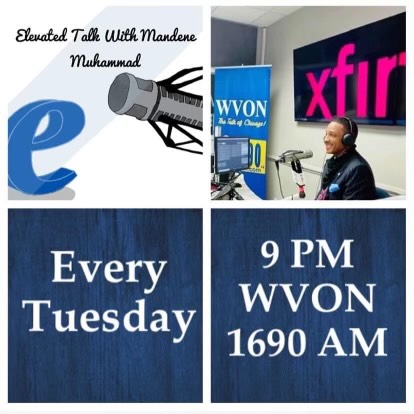 CHICAGO—“Elevated Talk,” hosted by Mandene T. Muhammad of Chicago, recently celebrated its one year anniversary on air streaming from the iconic Black-owned WVON 1690AM radio station.

“The mission of the show is to amplify the Teachings of the Most Honorable Elijah Muhammad,” explained Mr. Muhammad, referring to the Eternal Leader of the Nation of Islam.

“No matter the subject, I incorporate words of the Most Honorable Elijah Muhammad. We cover everything from business, health, to community news. I try to bring on a variety of people to discuss what they do. I focus on bringing Muslim guests because we’re not represented in other radio shows. Sometimes it’s like we don’t exist, so I want to be that additional platform for Muslims,” stated Mr. Muhammad. Emanuel Omarr is co-host of the show.

However, Mandene Muhammad’s intention was not to start a radio show.

“I opened a men’s boutique in Bronzeville, Legacy Men’s Boutique, 107 E. 47th Street. I started off advertising the boutique store on WVON, and the owner of the station gave me an opportunity to talk about the boutique and CROE (Coalition for the Remembrance of the Honorable Elijah Muhammad) and whatever else I wanted to talk about.”

CROE is an educational and media repository and institution located on the city’s Southwest Side and dedicated to the legacy and teachings of the Honorable Elijah Muhammad. It was founded by the late Munir Muhammad, Halif Muhammad and Shahid Muslim.

“It was because of the relationships that Brother Munir Muhammad established, that I was able to do the radio show, and also to even have the caliber of guests on the show,” stated Mr. Muhammad.

CROE has its own in-house studio where it broadcasts several shows throughout the week.

Mandene Muhammad stated that he had to get used to being in the forefront after working in the background for his mentor, Munir Muhammad of the “Munir Muhammad Show” and “Muhammad and Friends” on cable access, for many years. It’s been a great learning experience and is an extension of what is done at CROE Media, he explained.

“I want to make sure his voice is an integral part of the show,” stated Mandene Muhammad, explaining the segment “Moment with The Messenger,” where a clip from a lecture of The Most Honorable Elijah Muhammad is played during his WVON cast.