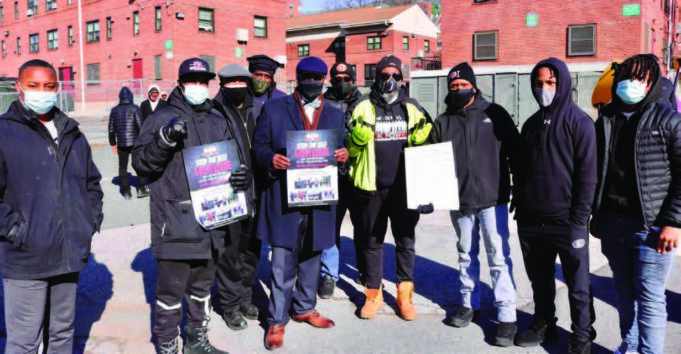 “The 10,000 Fearless:  We have to be the ones to stand in between the guns and the gangs.These are not bad youth; they are youth that have never been given a proper education and guidance, and opportunity, to make a better life. That’s not for White people to do, that’s for you and I to do.”

Those words became a hashtag and then a movement, with at least fifty 10,000 Fearless centers now set up all over the country. Some cities actively engage in stop the violence initiatives and programs for the homeless, while others have delved into issues concerning disaster preparedness and farm and land ownership.

Nation of Islam Southern Regional Student Minister Abdul Sharrieff Muhammad was one of the first people to move out on Minister Farrakhan’s desire for the 10,000 Fearless. In 2015, shortly after Minister Farrakhan’s words, Student Minister Sharrieff Muhammad set up the “10,000 Fearless Men and Women Headquarters of the South” in “The Bluff,” an area in Atlanta previously plagued with crime and drugs. He and his team have been servicing the area for over six years.

In the summer of 2021, they established a second base of operation, housed in “The Ark,” a centralized location for business activity. Two of their main focuses today are feeding community residents and patrolling the neighborhood with vehicles labeled, “10,000 Fearless Community Patrol.”

“The Honorable Minister Louis Farrakhan said he wanted us to make our community a safe and decent place to live,” Min. Sharrieff Muhammad said to The Final Call. “We patrol the area … trying to make sure that that area is safe.”

Along with the patrol, members and volunteers conduct meetings to resolve conflicts and feed people every day, sometimes into the wee hours of the night. They recently held a coat rally, where people from all ages were able to get free coats and shoes for the winter, including young children.

“They really appreciate it. And ofttimes, we’re the unsung heroes in the community, because we don’t get any big grant money and that kind of stuff,” Min. Sharrieff Muhammad said.

Every weekend, men with the 10,000 Fearless go to a gas station in DeKalb County, a county in the Atlanta-metro area, to pump gas for the sisters in the community.

“You should see the comments from the community thanking the brothers for coming,” Min. Sharrieff Muhammad said. He said the area used to be a high-crime area, but ever since the brothers have been going out, crime has been going down.

Other 10,000 Fearless endeavors include the establishment of an information center, helping people with their rental home situations, helping homeless people transition, addressing mental illness, a veteran’s program and a furniture delivery service. Through the information center, the 10,000 Fearless has access to different organizations and are able to inform people where to go for jobs and education.

“But the key thing is a kind word. Everybody loves, everybody needs a kind word,” said Barry Muhammad, director of the 10,000 Fearless Headquarters of the South.

In doing the work he’s doing, Barry Muhammad explained the importance of the proper handling of people. “When do you call the police? Or when do you call the ambulance for the mental situations that we deal with in our community? That’s the key thing, to know when and when not to,” he said. “Because when you’re dealing with the people, you’re still dealing with God’s people. You have to handle them with care, with the proper handling of people. And that helps the people more because it makes them feel good,” he explained.

Min. Sharrieff Muhammad said the biggest challenge has been opening new frontier. But still, he has been making progress, with new 10,000 Fearless houses opening in Tupelo, Miss., and Athens, Ga., and with conflict resolution centers located in Tupelo, Chattanooga, Tenn., and Augusta, Ga., among other places.

The 10,000 Fearless in Athens has been giving away food and clothing every Sunday, feeding the homeless and working with local political leaders and law enforcement to stop the violence. They also have a literacy program. The organization operates in conjunction with the Nation of Islam Athens Study Group.

Student Minister Zurifah Muhammad of Athens said this year, she wants the 10,000 Fearless to get their own transitional homes, one for men and one for women.

Making a difference in Baltimore

In Baltimore, Fruit of Islam (FOI) Student Captain Andrew Muhammad and a Christian brother started an organization, “We Our Us.” Their objective is to stop the killings of young Black men, women and children.

They identify zip codes where the most shootings occur and go directly into the violent areas of Baltimore City. The group also has a team of mental health and rehab specialists. They walk the streets three times a week, servicing the people’s needs.

Baltimore has a little over 600,000 people. In 2021, Baltimore police reported there were 337 homicides and more than 726 shootings in total. Andrew Muhammad said over the last six years, the city has been averaging 300 murders a year, with at least 80 percent being Black men.

Under a project titled “We can live, we don’t have to die,” Andrew Muhammad said they want to service one area, Northwest Baltimore.

“Last year in 2021, we had 40 murders in Northwest Baltimore. So, what we want to do is focus on that data, like how did they get 40 murders? Or how did they get 100 and something shootings? What’s the problem? Who are the victims?” he questioned. The group wants to know why these incidents are happening.

He said they plan to target the specific areas where the 40 murders took place and will go door-to-door to make inquiries. We Our Us is also going into area schools and establishing relationships with principals and teachers to find out the needs. They established relationships with the business community as well as the local police, including the majors and captains in the Northwest district.

“We do have good cops, and the Minister wants us to promote good policing,” Andrew Muhammad said, referring to Min. Farrakhan.

He said one of the biggest challenges has been lack of financial resources to help the men who are in the trenches and doing their part to try and make a difference. “We need money. We need finances. We need to be able to help the brothers that’s sacrificing their time, their family time, their finances, because we use our own money,” Andrew Muhammad explained.

“But that’s the beautiful thing about our organization. A lot of people didn’t bank on us being around this long in regard to the unity, because it’s so hard for Black men to come together and stay together and focus on one goal, especially when you have multiple different religious faiths involved.”

We Our Us recently became a 501(c)(3), which has allowed them to apply for local grants. One of their goals is to put into place a director or manager in the different areas they service.

“I believe 2022 is really going to be the year for us in regard to making our foundation strong, but also putting our footing and establishing a model for the city of Baltimore that we can use in the other eight districts around the city,” Andrew Muhammad said.

Taking over land and water

In the Southwestern part of the country, Christina Muhammad, coordinator for the 10,000 Fearless First Responders out of Austin, Texas, has been building on 100 acres of land about 40 minutes away from the city.

“I would say the biggest thing that Allah (God) has allowed us to accomplish is, seven minutes away from our land, basically we opened up a restaurant. The reason why we did the restaurant was to be able to have access and control over the food for the people,” she said. “So, that kind of goes hand in hand with the food that we grow. The food comes here, we prepare the food in a commercial kitchen and then we are actually able to feed our people,” she said.

“The biggest thing that I saw that was an issue in any point is that when a disaster takes place, we’re always looking for other people to give us resources,” she continued. “We have to become the resource.”

She referenced Hurricane Katrina, the devastating 2005 Category 5 storm when Black people were sitting on rooftops waiting for help to come. Along with the restaurant, the 10,000 Fearless First Responders have a soup kitchen where they feed the homeless to boost their immune systems.

The first responders are also moving around to different places where disasters occur, one of the most recent places being Kentucky after tornados pummeled parts of that state. They have their own storage area with disaster preparedness items and supplies for when they go into action to help those in need.

In Chattanooga, Tenn., under the direction of Student Minister Kevin Muhammad, the 10,000 Fearless established a nonprofit, called “Community Haven.” Under the nonprofit, the 10,000 Fearless acquired five acres of land. They have a 10-phase plan, with at least the first four phases complete: the establishment of an administrative office, a community market/thrift store, a communication/recording studio and a pavilion.

The other phases include establishing a basketball and pickleball court, an event court, a courtyard and amphitheater, an event hall, an urban garden and a business and resource center/technology university.

On one October night, seven women in Chattanooga were shot. Two died while the other five recovered from gunshot wounds. Kevin Muhammad held an initial rally to unite the community and fight for justice. He has been involved with seeking justice for the women, as he stood in solidarity with Chattanooga Mayor Tim Kelly and interim police chief Eric Tucker in December to announce a $20,000 reward.

The 10,000 Fearless have also taken to the waters, under the leadership of First Admiral Khalid Muhammad, who manages the 10,000 Fearless Sailing Academy in Buford, Ga. Students learn proper safety sailing skills, how to sail and how to determine wind direction.

The need and work continues

Min. Zurifah Muhammad has been working with the 10,000 Fearless on a national level to establish a national movement with national actions and intervention. “In unity, we can stop anything, and we can make anything happen,” she said.

She said on a national level, the desire is to activate initiatives such as a literacy program, the first responders and stop the violence campaign.

Min. Sharrieff Muhammad said the need for the 10,000 Fearless is going to be even greater, as grocery store shelves empty.  Images around the country have depicted rows and rows of empty shelves due to new Covid-19 strains, winter disasters and supply chain disruptions.

Christina Muhammad explained the name “10,000 Fearless,” saying Muslims are taught to fear no one but Allah (God) and that even in the midst of disasters and the Covid-19 pandemic, the doors of the Nation of Islam’s mosques are open.

“If you believe and have belief and faith and trust in your heart, and you are doing right by yourself, oh, you will make it if it’s Allah’s Will,” she said. “But those who seek to save their lives shall only lose their life. Get up and get to work. Work in the name of Almighty God Allah. So, with this new year, we have to get to work even more because that dark hour, that veil is about to close.”