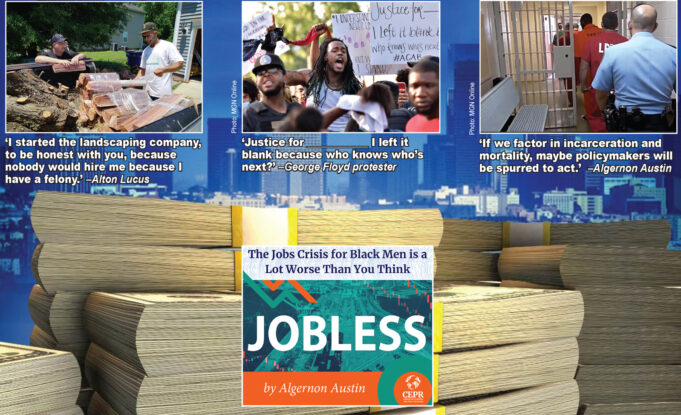 Not being able to work is never a good thing and Black male unemployment has been a constant problem in the United States. But Black male joblessness is even worse than experts usually say, and a combination of unemployment, incarceration, and death is costing Black America a staggering estimate of $50 billion a year.

It’s a mindboggling number. And, as a report by the Center for Economic and Policy Research concluded, not only is Black male joblessness three times higher than what’s reported, it has a devastating impact on Black neighborhoods, Black families and Black life.

“Because we typically assess joblessness among Black men based on the unemployment rate, we grossly underestimate the problem of joblessness for Black men, the harm it causes to Black communities, and the need for bold policy interventions,” said report author Algernon Austin of the Center for Economic and Policy Research. Late last year, the estimated official unemployment rate for Black males was 7.3 percent versus 3.4 percent for White males. The Black unemployment rate is typically twice that of Whites.

“It is important that the jobs gap be understood not just for its impact on the jobless Black men but also for its impact on Black families and communities,” said Dr. Austin. “Now we know the crisis is three times worse than we think it is. Or four times worse, if we factor in incarceration and mortality, maybe policymakers will be spurred to act,” he said.

The age-old problems of discrimination and lack of opportunity contribute to the losses and the usual formula for counting Black men who are not working doesn’t count men who are behind bars. But the Black male incarceration rate is about six times that of White men. So Black men in their prime working years are earning virtually nothing for themselves, their families, their children and their neighborhoods.

“The criminal justice system has racial and class biases that lead to higher rates of incarceration for Black males. Because of structural inequalities that affect health outcomes, Black males have a higher mortality rate than White males. Incarceration and mortality both significantly reduce the Black male labor force and are hidden factors which deprive Black communities of Black men’s potential incomes,” said the Center for Economic and Policy Research.

“The Jobs Crisis for Black Men is a Lot Worse Than You Think” report notes the employment-to-population of Black males ages 25 to 54 trails White, Latino and Asian men. The difference in the jobs gap for prime-age Black men and others is usually put at 300,000. The report released in December says the gap between Black men and others who are jobless is at least 900,000 and that could still be an underestimate.

While Black women, Latino women and Latino men face high unemployment and labor market discrimination, the plight of Black males is worst. It won’t change until policies are specifically designed to enhance the Black male condition, the report said.

In addition, according to economist Harry J. Holzer, missing data, such as 20 percent of Black men missing from Census figures, and the omission of Black men in lower paying jobs, hide the level of disparity.

“If we were to address the typical unemployment rate gap, we would add about $12 billion to Black communities annually. This increase in income could lift hundreds of thousands of families out of poverty,” the report concluded. Even if the estimated 900,000 Black men in the true jobless count were employed, “a deficit of income” would exist because of Black men who are incarcerated or who had died, the report continued.

Nation of Islam Southern Region Student Minister Abdul Sharrieff Muhammad, who is based in Atlanta and who has been a successful entrepreneur, sees a problem and an opportunity. The Hon. Elijah Muhammad, Eternal Leader of the Nation of Islam, told Black people yesterday, and Nation of Islam Minister Louis Farrakhan has stressed the same thing today:

“We must do something for self, because one day our open enemy was just going to drop us, just drop us off the jobs that they had us on. And if you look and see, that is happening right now,” said Min. Sharrieff Muhammad.

If Blacks had listened, and built institutions and businesses for themselves, we wouldn’t be as affected economically as we are now, he argued. The Hon. Elijah Muhammad, who was engaged in international trade and commerce, bought property, published Muhammad Speaks, a respected and leading Black newspaper, purchased farmland, opened businesses and encouraged his followers to do the same.

By 1974, the Nation had created a multi-million dollar economic empire, a trucking system, and owned a bank in Chicago. Those ventures were sold off or disbanded in 1975 with a change in the leadership and direction of the Nation of Islam. In the late 1970s, Min. Farrakhan started the process to rebuild the Nation with nothing but his faith and the word of the Hon. Elijah Muhammad.

Blacks, who get over $1 trillion out of the U.S. economy every year, must find their economic niche, unite and create their own reality, stressed Min. Sharrieff Muhammad. “So now they laid us off on all the jobs, especially now, with those that don‘t want to take the vaccinations.

They‘re forcing us to be creative, to use our creative genius that God gave to us to do something for ourselves, and that‘s what we‘re going to have to do over and over and over,” he said.

He pointed to hip hop artists making millions, or even an estimated billion dollars for rapper and cultural icon Kanye West, as potential sources of funds to create jobs. “I‘m saying the only barrier now, that really we‘re facing, is if we don‘t have God in our life,”

Min. Sharrieff Muhammad continued. “But if we have God in our life and call on Him, it‘s just like the old folks used to say, ‘God will make a way out of no way.’ And that‘s what we‘re being able to do right now and we‘re beginning to call on God, and we‘re seeing Him answer our prayers.”

Some of those answered prayers came as Min. Sharrieff Muhammad followed Min. Farrakhan’s call in 2015 for 10,000 Fearless men and women to make Black communities safe and decent places to live. He has partnered with his Christian co-chair in the effort, Rev.

Timothy McDonald of First Iconium Baptist Church, to work to restore a troubled Atlanta neighborhood known as “The Bluff.” They started with a 10,000 Fearless Men & Women Headquarters of the South, which was a refurbished home.

Their effort has spawned economic ventures, including a grocery store, a boutique for women and girls, and the “Your Fish” program, which allows young men to go door-to-door selling fish. There is also Rise Magazine, a high quality, glossy publication distributed across the U.S., the Caribbean and Africa, that employs journalists as well as Your Supreme Spring Water and a bakery. Other jobs have been created through our non-profit People United for Change, which helps feed and clothe people every day, according to Min. Sharrieff Muhammad.

Black people are facing annihilation if they don’t come together and closing the employment gap must include closing the education gap, he argued. The enemy especially never wanted the Black man to be educated so he would continue to be a slave, observed Min. Sharrieff Muhammad.

“But even being undereducated, we’re still using our geniuses to do for self,” he added. And, he said, this is the time of the divinely foretold rise of Black people and nothing can stop what God has ordained.