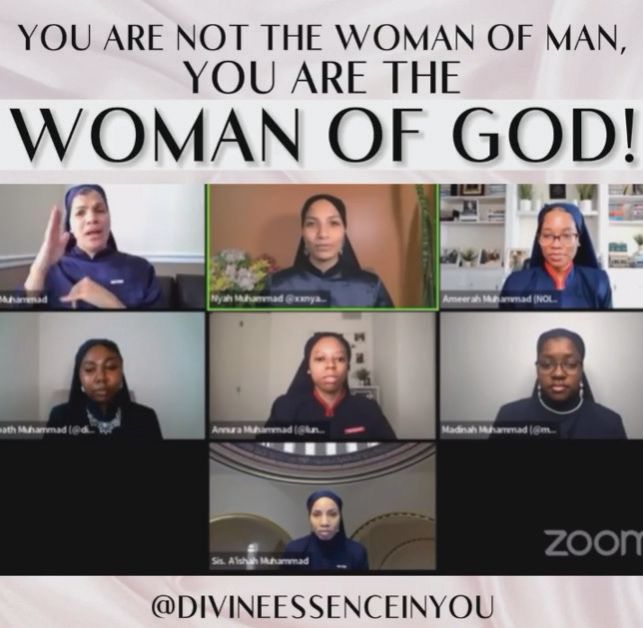 The Nation of Islam’s Muslim Girls Training and General Civilization Class (MGT and GCC) started 2022 with a very special class, introducing iDeny to women throughout the world with the theme, “New Year, Better Me,” via Zoom and YouTube.

The Honorable Minister Louis Farrakhan expressed his desire for the MGT Vanguard (women and girls ages 15-35) to continue using social media as a tool to encourage, uplift, and empower women and girls in the way of righteousness, purity, dignity, self-respect, self-love, and high civilization.

From the desire of the M.G.T. Vanguard to hear and obey the call of Min.  Farrakhan, iDeny—Divine Essence In You—was born. “iDeny is an organization dedicated to inspiring women, showcasing modesty, promoting chastity, and empowering you to rise into the god that you have the potential to be,” the group’s mission statement states in part. “As a woman, you deserve respect, love, and are worthy of respect and love. You are valuable. You are a god,” the statement continues.

The Jan. 1 program included a clip from a message by Min. Farrakhan giving guidance on a new year being a time of reflection. “When we are blessed to make it through the year, we should spend the last day of the year in reflection over what was and over the hope of what we would like it to be and with prayer and constant thought on the Creator without whose power we could not make it—not a day, not a minute, not an hour.”

The question was asked: What is self-love and what are the consequences if a woman or girl does not possess it? Sister Annura Muhammad provided an insightful answer: “When you don’t properly love yourself, there are literally direct and indirect consequences. You seek to find love anywhere that you can, even if it’s demeaning.”

Sister Madinah Muhammad chimed in with words of wisdom. “When you do not love yourself, you tend to have negative experiences of allowing people, whoever they may be, to treat you any kind of way because of lack of confidence,” she said.

Sister A’ishah Muhammad thanked Student National MGT Captain Naeemah Muhammad and the iDeny Team for inviting her to the virtual discussion, which attracted thousands of participants. “Regardless of your age, whether you’re young teen or older woman, this is where you need to be this morning. The benefits of self-love is freedom, justice, equality. But we don’t always know really what that means for us as an individual. Freedom to grow and be what Allah intended,” she explained.

During the program a new addition to iDeny called MGT Studios—a virtual MGT class for the world (available in various languages)—made its debut with “Let’s Get it Clean,” a video series focused on thoroughly and correctly cleaning, disinfecting and sanitizing your home bathroom. Additional videos based on the Seven Training Units of the MGT Class will be forthcoming.

Shawntell Muhammad can be contacted at