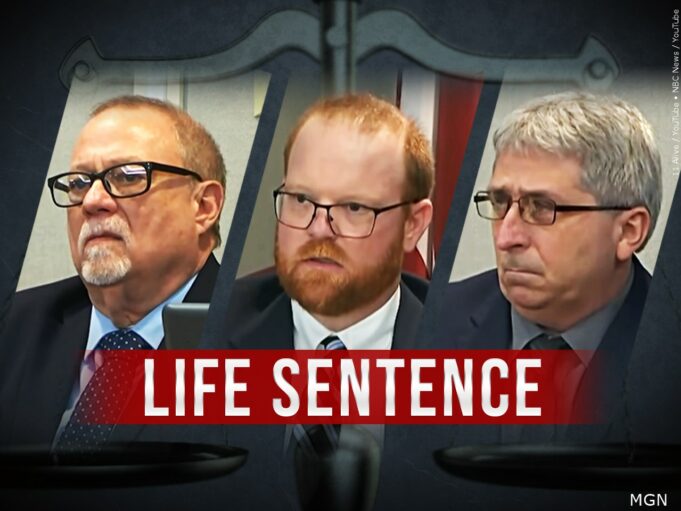 BRUNSWICK, Ga.—Three White men convicted of murder for chasing and killing Ahmaud Arbery were sentenced to life in prison, with a judge denying any chance of parole for the father and son who armed themselves and initiated the deadly pursuit of the 25-year-old Black man.

Superior Court Judge Timothy Walmsley said Mr. Arbery left his home for a jog and ended up running for his life for five minutes as the men chased him until they finally cornered him. The judge paused for a minute of silence to help drive home a sense of what that time must have felt like for Arbery, whose killing became part of a larger national reckoning on racial injustice.

“When I thought about this, I thought from a lot of different angles. I kept coming back to the terror that must have been in the mind of the young man running through Satilla Shores,” he said at the Jan. 7 sentencing, mentioning the neighborhood where Ahmaud Arbery was killed.

Greg and Travis McMichael grabbed guns and jumped in a pickup truck to chase Arbery after spotting him running in their neighborhood outside the port city of Brunswick on Feb. 23, 2020. Their neighbor, William “Roddie” Bryan, joined the pursuit in his own truck and recorded cellphone video of Travis McMichael firing close-range shotgun blasts into Mr. Arbery.

“Ahmaud Arbery was then hunted down and shot, and he was killed because individuals here in this courtroom took the law into their own hands,” the judge said. Judge Walmsley ordered the McMichaels to serve life without parole and granted Mr. Bryan a chance to earn parole after serving at least 30 years in prison.

A few dozen supporters cheered Mr. Arbery’s family as they exited onto the courthouse steps.

“Today your son has made history, because we have people who are being held accountable for lynching a Black man in America!” said Benjamin Crump, a civil attorney representing the family.

Murder carries a mandatory sentence of life in prison under Georgia law unless prosecutors seek the death penalty, which they opted against in this case. During the sentencing hearing, Mr. Arbery’s family had asked the judge to show no lenience in deciding whether to grant an eventual chance at parole. (AP)