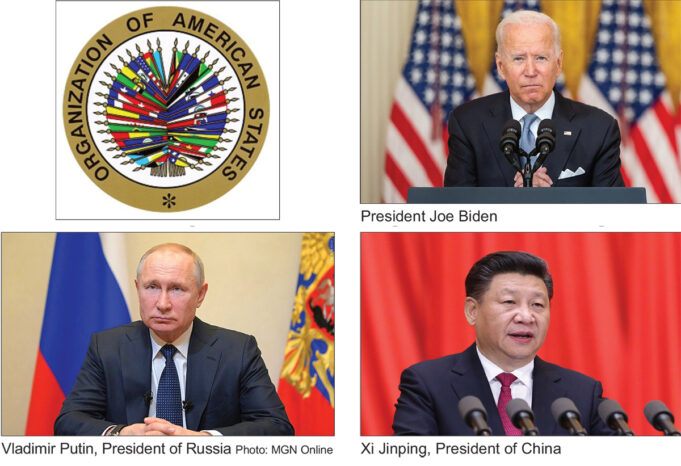 “Righteousness exalts a nation, but sin is the reproach of a people,”—Proverbs: 14:34 (Bible)

The U.S. continued to impose illegal sanctions without a United Nations mandate to choke the economies of nations she wanted to bow to her will throughout 2021.

These U.S. gangster moves led targeted countries to keep tightening their connections to America’s foes like Russia, China, and Iran for partnership and development.

Over the last 20 years China and Russia, in particular, have been building their own power bases and are formidable powers in a space where America once operated as a lone superpower.

“The United States has not been able to adapt to the reality that it’s no longer a unipolar world but a multipolar world,” commented Wilmer Leon, a political scientist and analyst.

He attributed increased potential conflict for America to her inability to shift in a changing world.

In the final week of 2021, hostility shot up between Russia and America over Ukraine. Defense Secretary Lloyd Austin ordered a U.S. Navy aircraft carrier strike group to remain in the Mediterranean Sea region. The carrier was initially on its way to the Middle East. America and its NATO partners said Russia was planning a possible invasion of Ukraine. They cited a massive buildup of thousands of Russian troops near the Ukraine border. Russia disputed the claim, accusing Ukraine of planning to reclaim territories lost to Moscow-backed rebels by force. Ukraine denied the charge.

They spoke frankly for nearly an hour late Dec. 30 as “Biden reaffirmed the U.S. threat of new sanctions against Russia in case of an escalation or invasion, to which Putin responded with a warning of his own that such a U.S. move could lead to a complete rupture of ties between the nations,” reported the Associated Press.

Officials said Mr. Putin asked for the call, which comes in advance of “scheduled talks between senior U.S. and Russian officials Jan. 9 and 10 in Geneva. The Geneva talks will be followed by a meeting of the Russia-NATO Council on Jan. 12 and negotiations at the Organization for Security and Co-operation in Europe, in Vienna on Jan. 13,” said the Associated Press.

Russia also wants a guarantee Ukraine will never join NATO. The U.S. has refused to make that commitment and vowed to back her European allies.

“The United States has always had to create this bully or this threat to justify the expenditures for the military industrial complex,” said Mr. Leon. However, he said, the real threat is powers like Russia and China leveling the global playing field—as the world’s number one economic and military power keeps declining.

“Surely America is the greatest of those nations that came up in the last 6,000 years but we’re looking at the death of America,” said the Honorable Minister Louis Farrakhan of the Nation of Islam during remarks to the Nubian Leadership Circle Summit in early December.

“We’re living to see the fall of a great nation and it is unraveling before our eyes,” said Minister Farrakhan.

Nations have come, become great, become corrupt and fallen. Nations have extended their power and reach over smaller nations, explained the Minister.

He said greed, lies, corruption and thievery are characteristics of America that are bringing her down.

Africa has had to wade through the last 12 months dealing with imperialism and big power competition.

“We saw a continent that had to navigate through the increased desperation of Western powers that was manifested through militarism and cold war with China,” said Netfa Freeman, an organizer with Pan- African Community Action.

Like past decades Africa is the desire of world powers—not for development—but for her vast resources. America, France and others cannot be viable powers in the 21st century without access to the world’s resources, particularly in Africa.

Coveting the resources of Africa and other regions, the United States continues to move like a beast with its policies and activities.

Mr. Freeman told The Final Call that in 2022 “we must bridge the divide” between Africans on the continent. He was referring to a language division between French-speaking and English-speaking people rooted in colonialism. For 2022 there must also be an understanding of the correlation between the conditions of Blacks in America as a domestic colony of U.S. imperialism, he added.

Mr. Freeman argued Africa is dealing with the last gasp of Western imperialism and economic domination. “As it’s gasping to survive, our people suffer in the process, but there is also revolutionary potential in it,” said Mr. Freeman.

International bodies like the Organization of American States are failing as tools for U.S. moves in Latin America. Washington prying and meddling in Bolivia, Honduras, Nicaragua, and Venezuela is becoming more and more ineffective.

2021 was another year for lost U.S. prestige and friendship in Latin America, Africa and the Caribbean.

“Now Latin American (and) Caribbean countries are joining together and forming their own institutions. That’s strengthening,” said Margaret Flowers of PopularResistance.com.

“The United States is trying to pretend like nothing has changed. And everything has changed,” said Ms. Flowers. “America is a capitalist country that’s in severe decline.”

Ms. Flowers pointed to the Summit For Democracy President Biden conducted virtually with representatives from 100 nations on Dec. 4. “It was a big flop,” she said. “That was this administration’s attempt to create some sort of illusion that it still is a dominant power in the world.”

She doubts the Biden administration or the U.S. political and economic system will change in 2022. But Ms. Flowers hopes growing awareness and mobilization against U.S. domination will continue.