Home National U.S. closer to civil war ‘than we want to believe’ 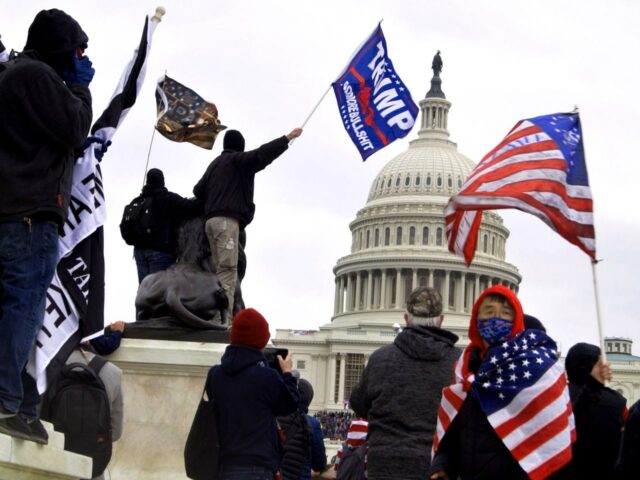 America is unraveling at her very seams as she deals with the aftermath of last year’s violent, mostly White mob descending on her front porch.

The Honorable Minister Louis Farrakhan of the Nation of Islam foresaw the division present, saying America is “unraveling right in front of your eyes” and is “cascading downward” in Feb. 2020.

Now, a U.S. House Jan. 6 Select Committee is attempting to paint the story of what happened that day one year ago. The committee has been actively working to expose former President Donald Trump and his inner circle for attempting to overturn the presidential election and for their hand in the Jan. 6 insurrection. It plans to have multiple weeks of public hearings. Trials are scheduled to begin in February. The Committee also plans to release a preliminary report in the summer and a final report in the fall.

“The January 6 commission is chronicling and documenting the revelation that the Honorable Minister Louis Farrakhan had of the unraveling of a great nation,” Dr. Abdul Haleem Muhammad, the Southwest Student Regional Minister of the Nation of Islam based in Houston, told The Final Call.

American democracy itself is under threat, warned Barbara F. Walter, who stated, “We are closer to civil war than any of us would like to believe.”

Ms. Walter is a political science professor at the University of California at San Diego. She serves on a CIA advisory panel called the Political Instability Task Force, which monitors countries around the world.

“No one wants to believe that their beloved democracy is in decline, or headed toward war,” she writes in an upcoming book on how civil wars start, as reported by The Washington Post. But “if you were an analyst in a foreign country looking at events in America—the same way you’d look at events in Ukraine or the Ivory Coast or Venezuela—you would go down a checklist, assessing each of the conditions that make civil war likely. And what you would find is that the United States, a democracy founded more than two centuries ago, has entered very dangerous territory.”

Three worried retired generals wrote an opinion piece in The Washington Post, sharing fears of a possible coup after the next national election for president with a divided U.S. military taking sides.

With the 2024 presidential election, there is potential for a split in the U.S. armed forces given the current climate, the “stolen elections” narrative, and a lack of understanding of the Constitution and the role of military personnel, they said. A chain of command breakdown along partisan lines could mean military officers, divisions or units ready to obey competing commanders in chief, such as Joe Biden versus Donald Trump, or a Trump-like losing candidate who claims the election was stolen, one general also warned in a National Public Radio interview.

“In short: We are chilled to our bones at the thought of a coup succeeding next time,” they wrote in the Post.

They called on Congress to show more urgency in holding the leaders who inspired the Jan. 6 insurrection accountable, advised the Pentagon to order a civics review for all members and urged that strict “unity of command” obedience be reinforced.

The nation is bitterly divided. A recent poll by the University of Massachusetts Amherst found continued national political division over the insurrection. Out of 1,000 respondents, 86 percent of Democrats support the Jan. 6 investigation and prosecutions compared to 29 percent of Republicans, with 52 percent saying they oppose the efforts. In surveys done in November, the academic consortium Bright Line Watch found that “partisan divisions over the legitimacy of the 2020 election remain profound.”

They also found that while there was reduced support for violence, “millions of Americans explicitly endorse political violence directed against the other party.” More specifically, 17 percent of Republicans who identify strongly with their party support the use of violence to restore Mr. Trump to presidency, and 39 percent support “doing everything possible to prevent the other party from governing effectively.”

Meanwhile, an AP investigation found that racism and extremism remain an ongoing concern in the military, three retired U.S. generals warned that another insurrection could occur after the 2024 presidential election, instigated by the military, and millions of armed Americans are ticking time bombs, waiting to combust if Mr. Trump’s 2024 presidential play doesn’t result with him in power.

Dr. Greg Carr, chair of the Africana Studies Department at Howard University, described how White nationalist conspirators around the country have been working overtime to pass voter suppression laws and have been a part of a “nationwide slow-moving coup d’état, which is anchored in voter suppression.”

Dr. Muhammad described the division as the “furthering of the partisanship which will serve as the nails in the coffin of America” and said “dissatisfaction is nearing 100 percent, therefore we can expect a 100 percent change.”

“Partisan politics must die if America is to live,” he said, quoting from Minister Farrakhan’s book, “A Torchlight for America.”

The Jan. 6 Committee has interviewed more than 300 witnesses, has obtained thousands of pages of documents and has subpoenaed the phone records of over 100 people, including former White House chief of staff Mark Meadows. After he defied the subpoena, the House voted to hold him in criminal contempt of Congress. As the committee requests information from Reps. Scott Perry (R-Pa.) and Jim Jordan (R-Ohio), Mr. Trump and his inner circle refuse to comply, claiming “executive privilege.” Michael Flynn, Mr. Trump’s former national security adviser, filed a lawsuit on Dec. 21 to prevent the committee from enforcing a subpoena for his testimony and documents.

The committee, led by Democrats with very few Republicans on board, has been attempting to work quickly, as government officials prepare for a possible red wave during the 2022 midterm elections.

Over 700 insurrectionists have been charged, with about 70 defendants who have been sentenced and less than half of that who saw jail time.

Dr. Greg Carr accused Congress of operating “timidly” and being “hesitant to test the rule of law.”

“The main reason they are hesitant is because they understand that there is a necessary illusion in this country, that this country is governed by the rule of law. It’s an illusion, but it’s a necessary illusion,” he said. “Anytime you subpoena someone to appear for the United States Congress, they refuse and still walk around free, what you demonstrated is there is no rule of law because there’s no enforceability.”

What’s on trial right now is the framework of the country, the political scientist explained. He doesn’t expect there will be accountability. And, he added, if those convicted do not include the former president, the members of Congress who played a role and those who paid, coordinated and planned, the government will have shown something even more important. “There are no consequences for coup d’états in the United States,” he said.

ABOUT US
From humble beginnings in the basement of the Honorable Minister Louis Farrakhan’s south Chicago home in 1979, Final Call newspaper has emerged as an uncompromising alternative to the mainstream corporate owned media machine.