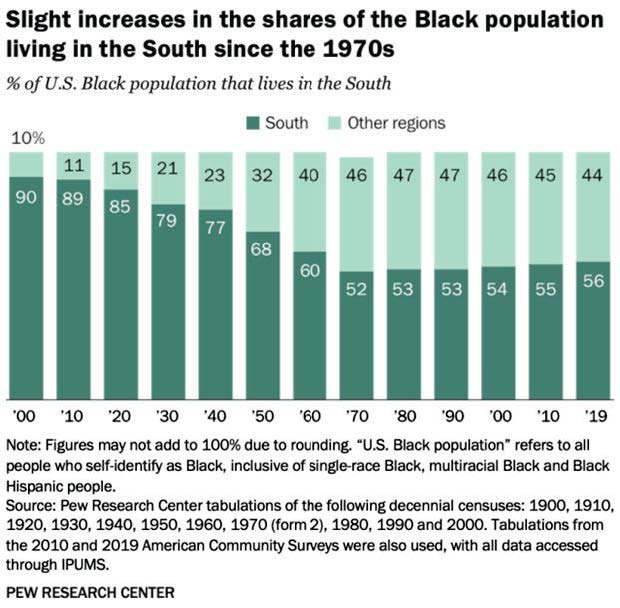 The Great Migration from the South recorded 6 million Black people fleeing North from the domestic terrorism, racial persecution and poverty of the South. It was the largest and most protracted movement of human beings ever to take place on this continent, beginning in 1915 at Mobile, Alabama, and continuing at least 55 years, through 1970.

Blacks were lynched and burned out of the South, but the COVID-19 “pandemic” exposed the inherent racism in America’s systems and policies. Lockdowns have contributed to the loss of already fragile Black businesses and a steady stream of Black people looking for “greener pastures” in the South.

“Between February and April of 2020, Black business ownership declined more than 40%, the largest drop across any ethnic group, according to a report by the House Committee on Small Business Committee. The report details the impact Covid-19 has had on Black-owned businesses in the United States. Black-owned businesses were less likely to handle mandated closures due to lack of access to financial relief,” reported Forbes.com.

White households held 7.8 times the wealth as Black households. “According to the Federal Reserve Bank of New York, about 58 percent of Black-owned businesses were at risk of financial distress before the pandemic, compared with about 27 percent of white-owned businesses.” The Forbes article went on to say, “A study found that Black business owners have 12 times more wealth compared to Black people who did not own businesses.

A 2012 survey found that Black businesses contributed up to $165 billion in revenue and created more than 1 million jobs.” But when the lockdowns occurred, 60% of white businesses successfully applied for financial relief under the Small Business Administration’s Paycheck Protection Program (PPP). On the other hand, only 29% of Black business owners who applied received relief, another form of high-tech lynching.

Then came the so-called vaccines and Presidential “mandates” designed to make people take these kill shots or lose their employment and be locked out of public facilities, in a way eerily similar to the “white only” signs of racial segregation. This further pushed Blacks, who had already showed a hesitancy to take these shots to pack up their “covered wagons,” leave the big cities up North and move to the suburbs down South in places like the Atlanta Metropolitan Statistical Area (MSA). In 2010, the 29 counties included in the Atlanta MSA were 51% white. Now this same area is 56% Black. 6.1 million people live in those 29 counties which consists of 57% of Georgia’s total population.

It is becoming increasingly clear that the lockdowns and mandates, disguised as a way to stop a “virus,” were actually a part of what World Economic Forum (WEF) Founder Klaus Schwab calls the “Great Reset” where no one will own property but the super-rich. This Forum of the economic movers and shakers of the planet has met every year in Devos, Switzerland, since 1971 to map out their program of global economic restructuring.

“The Forum suggests that a globalized world is best managed by a self-selected coalition of multinational corporations, governments and civil society organizations (CSOs), which it expresses through initiatives like the ‘Great Reset’ and the ‘Global Redesign.’ It creates periods of global instability—such as the financial crisis and the COVID-19 pandemic – as windows of opportunity to intensify its programmatic efforts.”

Catherine Austin Fitts, a government whistleblower who served as Assistant Secretary of Housing and Urban Development for Housing in the George H. W. Bush Presidency, has warned us that in this new world everything will be owned by the super-rich and controlled through a new cashless monetary system under the control of the central banks. In an interview on TheHighwire.com, Ms. Fitts explains what this new economic reality will look like on a personal basis: “You will no longer have a currency.

You will have a credit at the company store. If they don’t want you traveling for more than 5 miles from your home, your credit card, your bank account won’t work more than 5 miles from your home … If they have decided that they don’t want you to buy a pizza, then you can’t buy pizza. You are talking about complete control at a very intimate level of surveillance. And remember, there’s no privacy. They will be able to track every transaction you make. We are talking about a credit at the company store and literally a slavery system.”

In 1910, just 45 years out of chattel slavery, Black people owned 16 million acres of land, had built over 60 towns, built schools, developed hundreds of marketable inventions. By 1923 we had 200 hospitals. This was appalling to hateful white Americans; they lynched and burned us out of our businesses and land, offering us low-paying jobs up North in their factories.

Even in our segregated communities up North, we developed thousands of businesses in various communities that could have been united under the umbrella of the Most Honorable Elijah Muhammad’s operational unity to form a “Nation within a nation.” Instead in the 1960s we fell for the promise of integration with White America, where we thought we would have equal access to the “American Dream.”

We gave up our farmland, our schools, our hospitals and most of our businesses to just work in government jobs, manufacturing plants and a few in corporate America—only to find out at the end of time that we were integrating, as Dr. Martin Luther King, Jr. warned, into a “burning house.” We did not foresee that this fire would be COVID-19.

Now we see with these draconian lockdowns and vaccine mandates produced by this COVID-19 “pandemic,” Black people have integrated with the middle- and lower-class white people who have given up their freedoms. They have given up their economic freedom along with their rights to their own body to the “New World Order,” where we will all be slaves at the “company store” and tracked from behind a computer screen like Will Smith in “Enemy of the State,” unless we separate now and build our own economic reality.