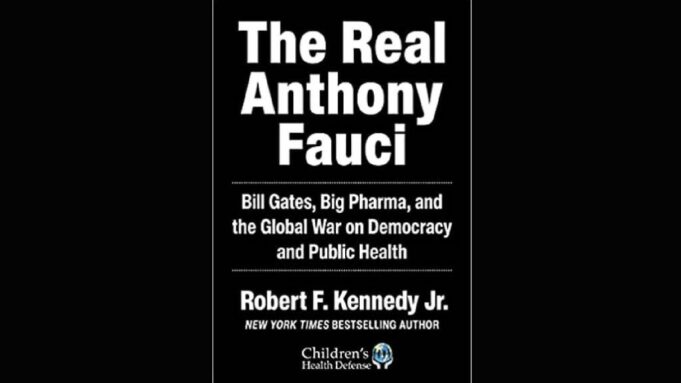 “Armageddon is the final war of Judgment and separation of the righteous from the wicked, of which I am sent to teach.” — Most Honorable Elijah Muhammad

“I would say this is Armageddon. This is the apocalyptical forces of ignorance and greed and totalitarianism. This is the final battle. We need to win this one.” — Robert F. Kennedy, Jr.

In 2015 attorney and health advocate Robert F. Kennedy, Jr., met with the Honorable Minister Louis Farrakhan about evidence he had uncovered that high concentrations of mercury in the standard vaccines were causing irreparable harm to Black children … these tainted vaccines were likely the cause of rising levels of autism and disease in the Black community.

Of that meeting Minister Farrakhan said, “Some of us are afraid, but Mr. Kennedy found his way to our door.” This effort by Mr. Kennedy to alert Blacks to the dangers of toxic vaccines very likely saved thousands from untold suffering at the hands of unethical vaccine makers.

Robert F. Kennedy, Jr., has again sounded the alarm about the diabolical effort of world governments to inject Big Pharma’s deadly COVID-19 “vaccine” into 7 billion arms. He has written an extraordinary book that dissects this satanic plot and exposes its operatives and their objectives. The 452-page book with hundreds of footnote references is entitled”

The Real Anthony Fauci: Bill Gates, Big Pharma, and the Global War on Democracy and Public Health (Skyhorse Publishing). It immediately became the Number One on Amazon.com, and Number Five on the New York Times bestseller lists. Over the next few weeks, The Final Call will present this amazing book’s INTRODUCTION.

INTRODUCTION to The Real Anthony Fauci

I wrote this book to help Americans—and citizens across the globe—understand the historical underpinnings of the bewildering cataclysm that began in 2020. In that single annus horribilis, liberal democracy effectively collapsed worldwide. The very governmental health regulators, social media eminences, and media companies that idealistic populations relied upon as champions of freedom, health, democracy, civil rights, and evidence-based public policy seemed to collectively pivot in a lockstep assault against free speech and personal freedoms.

Suddenly, those trusted institutions seemed to be acting in concert to generate fear, promote obedience, discourage critical thinking, and herd seven billion people to march to a single tune, culminating in mass public health experiments with a novel, shoddily tested and improperly licensed technology so risky that manufacturers refused to produce it unless every government on Earth shielded them from liability.

Across Western nations, shell-shocked citizens experienced all the well-worn tactics of rising totalitarianism—mass propaganda and censorship, the orchestrated promotion of terror, the manipulation of science, the suppression of debate, the vilification of dissent, and use of force to prevent protest. Conscientious objectors who resisted these unwanted, experimental, zero-liability medical interventions faced orchestrated gaslighting, marginalization, and scapegoating.

American lives and livelihoods were shattered by a bewildering array of draconian diktats imposed without legislative approval or judicial review, risk assessment, or scientific citation. So-called Emergency Orders closed our businesses, schools and churches, made unprecedented intrusions into privacy, and disrupted our most treasured social and family relationships. Citizens the world over were ordered to stay in their homes.

Standing in the center of all the mayhem, with his confident hand on the helm, was one dominating figure. As the trusted public face of the United States government response to COVID, Dr. Anthony Fauci set this perilous course and sold the American public on a new destination for our democracy.

This book is a product of my own struggle to understand how the idealistic institutions our country built to safeguard both public health and democracy suddenly turned against our citizens and our values with such violence. I am a lifelong Democrat, whose family has had eighty years of deep engagement with America’s public health bureaucracy and long friendships with key federal regulators, including Anthony Fauci, Francis Collins, and Robert Gallo.

Members of my family wrote many of the statutes under which these men govern, nurtured the growth of equitable and effective public health policies, and defended that regulatory bulwark against ferocious attacks funded by industry—and often executed by Republican-controlled congressional committees intent on defunding and defanging these agencies to make them more “industry friendly.”

I built alliances with these individuals and their agencies during my years of environmental and public health advocacy. I watched them, often with admiration. But I also watched how the industry, supposedly being regulated, used its indentured servants on Capitol Hill to systematically hollow out those agencies beginning in 1980, disabling their regulatory functions and transforming them, finally, into sock-puppets for the very industry Congress charged them with regulating.

My 40-year career as an environmental and public health advocate gave me a unique understanding of the corrupting mechanisms of “regulatory capture,” the process by which the regulator becomes beholden to the industry it’s meant to regulate. I spent four decades suing the US Environmental Protection Agency (EPA), and other environmental agencies to expose and remedy the corrupt sweetheart relationship that so often put regulators in bed with the polluting industries they regulated.

Among the hundreds of lawsuits I filed, perhaps a quarter were against regulatory officials making illegal concessions to Big Oil, King Coal, and the chemical and agricultural polluters that had captured their loyalties. I thought I knew everything about regulatory capture and that I had armored myself with an appropriate shield of cynicism.

But I was wrong about that. From the moment of my reluctant entrance into the vaccine debate in 2005, I was astonished to realize that the pervasive web of deep financial entanglements between Pharma and the government health agencies had put regulatory capture on steroids. The CDC, for example, owns 57 vaccine patents and spends $4.9 of its $12.0 billion-dollar annual budget (as of 2019) buying and distributing vaccines. NIH owns hundreds of vaccine patents and often profits from the sale of products it supposedly regulates.

High level officials, including Dr. Fauci, receive yearly emoluments of up to $150,000 in royalty payments on products that they help develop and then usher through the approval process. The FDA receives 45 percent of its budget from the pharmaceutical industry, through what are euphemistically called “user fees.” When I learned that extraordinary fact, the disastrous health of the American people was no longer a mystery; I wondered what the environment would look like if the EPA received 45 percent of its budget from the coal industry!

Today many of my liberal chums are still crouched in a knee jerk posture defending “our” agencies against Republican slanders and budget cuts, never quite realizing how thoroughly the decades of attacks succeeded in transforming those agencies into subsidiaries of Big Pharma.

In this book, I track the rise of Anthony Fauci from his start as a young public health researcher and physician through his metamorphosis into the powerful technocrat who helped orchestrate and execute 2020’s historic coup d’état against Western democracy. I explore the carefully planned militarization and monetization of medicine that has left American health ailing and its democracy shattered.

I chronicle the troubling role of the dangerous concentrated mainstream media, Big Tech robber barons, the military and intelligence communities and their deep historical alliances with Big Pharma and public health agencies. The disturbing story that unfolds here has never been told, and many in power have worked hard to prevent the public from learning it. The main character is Anthony Fauci….