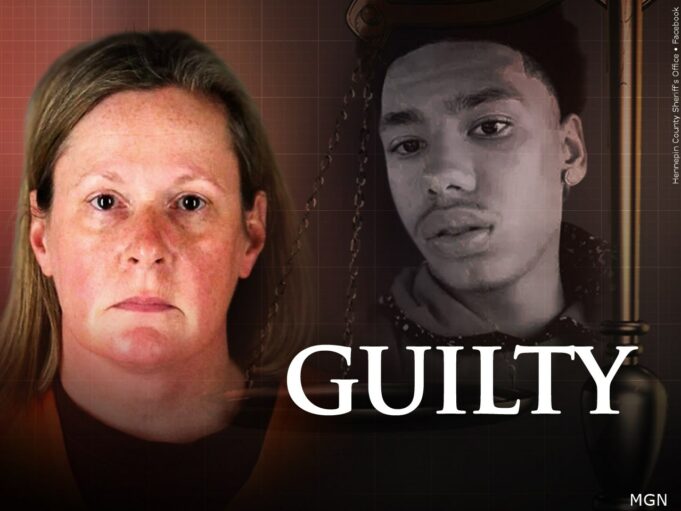 Minnesotans and the country have seen another guilty verdict in a high-profile police brutality case, but activists are still pushing for more.

A jury found Kim Potter, a former cop from Brooklyn Center, Minn., a suburb of Minneapolis, guilty of first-degree and second-degree manslaughter for the shooting death of 20-year-old Daunte Wright. The jury deliberated for four days. Under the state’s sentencing guidelines, Ms. Potter, who said she confused her handgun for her taser, faces about seven years in prison on the most serious count. She is scheduled to be sentenced on Feb. 18. The White veteran officer was found guilty on Dec. 23.

“Today we have gotten accountability and that’s what we’ve been asking for from the beginning,” said Katie Bryant, Daunte Wright’s mother, in the aftermath of the verdict. She thanked supporters, saying “We love you, we appreciate you, and honestly, we could not have done it without you.”

Anika Bowie, a community justice leader and vice president of NAACP Minneapolis, told The Final Call it was a long, extensive wait for the verdict.

“It was very emotional, painstaking and lots of crying and pain and tension. And so we are happy, at least, that the family can be at peace and at least know that the person that killed their son Daunte Wright will be facing the consequences through the court system,” she said.

She commended the trial for allowing video recording inside, bringing a level of transparency that she believes should be standard procedure.

Minnesota Attorney General Keith Ellison’s office handled the prosecution. The case consisted of some of the same attorneys that, eight months earlier and in the same courtroom, helped convict Derek Chauvin for the death of George Floyd.

Criminal attorney Sadiyah Karriem out of Houston, Texas, told The Final Call that real justice will come with the sentencing.

“We can already anticipate that her sentence would be light, so can we really say that there was true justice? No, there’s not going to be true justice as it concerns Daunte Wright because you can’t bring him back. That mother cannot hold her son ever again,” she said.

Nekima Levy-Armstrong, a civil rights attorney and founder of the Racial Justice Network, said to The Final Call that the jury took the evidence seriously and made the right decision.

“I believe that today’s verdict could save lives, because it sends a message to law enforcement that they’re not above the law and that they could possibly be held accountable under similar circumstances,” she said.

She said she also hopes it causes police officers to think twice about pulling people over for petty, low-level traffic violations.

Ms. Potter shot and killed the young Black man during a traffic stop on April 11. Footage from police body cameras and dashcams shows she and an officer she was training, Anthony Luckey, pulled Mr. Wright over for having expired license plate tags and an air freshener hanging from his rear-view mirror. The officers discovered he had an outstanding warrant for a weapons possession charge and initiated an arrest.

Mr. Wright followed orders to get out of the car, but as he was being handcuffed, he pulled away and got back in. Ms. Potter, who was a 26-year veteran officer and president of the Brooklyn Center police union, threatened to tase the young man multiple times while aiming her gun at him. She then fired a bullet into his chest.

Toshira Garraway, founder of Families Supporting Families Against Police Violence, has worked closely with Katie Wright and the family. She believes that justice was served but is advocating for justice for all of the others before the murder of Daunte Wright, including 21-year-old Kobe Dimock-Heisler in 2019, whose death Ms. Potter was also involved in.

Twelve years ago, St. Paul, Minn., police brutally beat to death Justin Teigen, Ms. Garraway’s 24-year-old fiancé and the father of her now 15-year-old son, she recounted. Her family has not received justice.

She wants to see the state’s laws changed to hold officers accountable. Minnesota’s statute of limitations for filing a wrongful death lawsuit is three years from the death. Ms. Garraway said during that three-year time limit while families are grieving, they’re also being stalked and harassed, and cases are often held open as video footage is withheld. She and others are looking to either abolish the statute of limitations law or extend the period.

“Derek Chauvin as well as Kim Potter is the face of many, many killer cops that are still out here, living in our communities, eating with their children, spending time for Christmas while we go home without our loved ones. It’s a pain I cannot describe, and I hope that even beyond the public eye, that they continue to hold these officers accountable,” the Black mother said.

In a previous Minneapolis case, former officer Mohamed Noor, who is Somali American, was convicted of third-degree murder and manslaughter for the fatal shooting of Justine Ruszczyk Damond in 2017. But the Minnesota Supreme Court overturned his murder conviction, saying the third-degree murder statute only applies when a defendant shows a “generalized indifference to human life.” He is now sentenced to about five years.

Ms. Bowie pointed out differences between his case and Kim Potter, saying Ms. Potter actually had a leadership role within the Brooklyn Center Police Department and also had a history of being engaged in police-involved shootings.

“I think this trial and then the outcome and the verdict of this trial sends a signal out for officers to conduct themselves in more of a professional way,” she said. “Because we have seen now, this is the second case of an officer being found guilty within police-involved shootings. So I think this is extremely significant and sets a precedent for the standard and expectations of how officers conduct themselves with community members.”

Atty. Karriem said implicit bias training for officers is a must, as well as psychological evaluations. “But ultimately,” she said, “as Black people, we have to create our own and separate from our open enemy and its system because it was never created to give us justice.”

She added that Allah (God) is  judging America for what is being done to Black people, for police brutality and for the killings of Black men and women, words that echo back to the teachings of the Honorable Elijah Muhammad, Eternal Leader of the Nation of Islam, and the guidance of the Honorable Minister Louis Farrakhan.

“Allah doesn’t sleep, and He is the judgment,” she said.