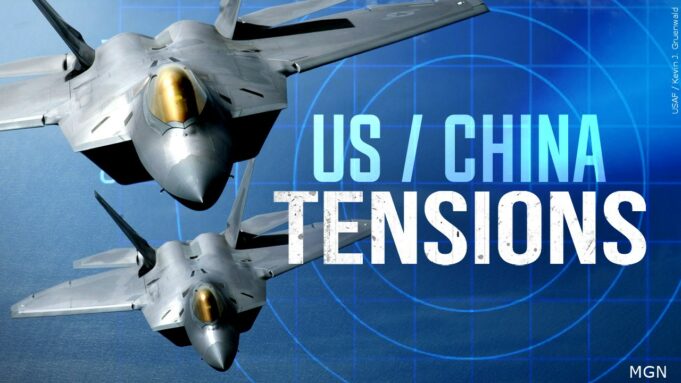 America is deeply divided against itself and was a troubled power on the world stage in 2021. Signs became clearer throughout this year that America is unraveling as the great empires of old crumbled.

It was seen in her defeat after 20 years of war in Afghanistan and America being all but pushed out of Iraq. She lost friendship and credibility among her allies and has been out maneuvered for global influence by the Peoples Republic of China.

“I would say that 2021 was a pivotal turning point for U.S. and global history,” said Ajamu Baraka, political analyst and national organizer with Black Alliance for Peace. Mr. Baraka said in 2021 the plunge of America and White world supremacy was further exposed worldwide.

He also noted crises like the Covid pandemic, climate change, and the heightened militarization of nations showed there must be fundamental change and a shift away from America and Europe dominating global affairs.

“That awareness really began to be crystallized in my opinion in 2021,” he said. Mr. Baraka added such awareness has not resulted in a “new kind of global politics,” but observed a political shift taking place where America is failing to realize her global objectives.

He pointed out that America’s failure to break the governments of Nicaragua, Venezuela, and Cuba as a sign of its waning power. These nations suffered increased sanctions this year for opposing U.S. meddling.

The Holy Qur’an, the Islamic holy book, says that “every nation has a term” and will be judged by its deeds. In his monumental book, “The Fall of America,” the Most Honorable Elijah Muhammad, the Eternal Leader of the Nation of Islam, wrote about “America’s Dreaded Destiny,” her prophesized fall and why she is in decline as the world’s most formidable economic and military power.

There was heightened awareness by the people of various nations and geopolitical observers that America is in a precipitous decline and could in fact be defeated. The U.S. loss and chaotic exit from Afghanistan in September was one of many instances illustrating this reality.

America spent 2021 as a sinking superpower angling back for global strength. “America is back” was the foreign policy mantra of the Joe Biden/Kamala Harris administration promising a return to the heady days of American influence on the world stage.

Amidst a myriad of world crises facing America, President Biden placed particular focus on China. “American leadership must meet this new moment of advancing authoritarianism, including the growing ambitions of China to rival the United States,” said Mr. Biden, in his first foreign policy speech of his presidency. He laid out a foreign policy aim to “take on directly” the challenges posed by “our most serious competitor, China.”

Both nations are on record throwing rhetorical barbs at each other that some liken to old cold war animosity between America and the former Soviet Union.

“It’s clear it’s still what they call the new cold war,” said Sara Flounders, a founder of the International Action Center, an antiwar group. “They’re not throwing any hot punches … but they’re clearly doing everything they can to disrupt every relationship China has,” she explained.

For example, in Africa and Asia, there is one U.S. policy centered on countering China, Ms. Flounders said, even if they must pull countries apart like they are doing in Ethiopia, she added. A major bilateral trade pact was inked between Ethiopia and China, its top trading partner.

China is in every corner of the world, from the South Pacific to South and Central Asia, the Middle East, Africa, the Caribbean, North, Central and South America.

U.S. anxiety about China is valid, say experts. America is the strongest economic and military power worldwide but has been losing ground to China in a contentious competition for global influence.

China ranks second as the world’s largest economy and has surpassed America in important regions like Africa and Southeast Asia. In the first nine months of 2021, indicators of China-Africa economic and trade cooperation showed an overall upward trend. Trade reached $185.2 billion, an increase of 38.2 percent year-over-year—record levels for the first nine months of any year.

Over six decades China and Africa forged a strong alliance in the struggle against imperialism and colonialism and embarked on a path of cooperation toward development and revitalization.

“Together, we have written a splendid chapter of mutual assistance amidst complex changes and set a shining example for building a new type of international relations,” said Chinese President Xi Jinping during the Eighth Forum on China-Africa Cooperation held late November in Dakar, Senegal.

The State of Southeast Asia: 2021 Survey Report from the Singapore based ISEAS-Yusof Ishak Institute said 76.3 percent  of surveyed people consider China as the most influential economic power compared to the U.S. (7.4 percent) in the region.

Since the beginning of the year the Biden administration employed tactics to contain China’s growth. The latest was Mr. Biden’s Summit for Democracy on Dec. 4. Analysts said the summit was Washington’s attempt to form a demarcation of nations against China under the cloak of the summit’s anti-autocrat agenda.

A joint letter from Qin Gang, China’s U.S. ambassador, and Anatoly Antonov, Russia’s U.S. ambassador, rebuked the summit as “undemocratic.”  “No country has the right to judge the world’s vast and varied political landscape by a single yardstick,” they wrote.

Having other countries “copy one’s political system” through “color revolution, regime change and even use of force” go against international law, the ambassadors argued. International affairs should be handled with consultation through true multilateralism.

“There should be a more inclusive global governance, not something like ‘might makes right.’ Seeking supremacy and putting oneself always first are acts of hegemonism and unilateralism,” said the diplomats.

It should be noted that Taiwan, which is in a sovereignty dispute with China was present at the virtual summit. Neither Beijing nor Moskow was invited.

“China’s existence is very threatening to them,” said Ms. Flounders. “They want to be able to go into a country and call the shots and China won’t let them do that,” she added.

Alliances are forming against the hegemony of America. The U.S. imposes pressure on noncompliant nations through global strongarming and bullying.

Ms. Flounders pointed out that America placed added sanctions on smaller nations like Nicaragua and Venezuela for strengthening their alliance with China. These are smaller nations forming strong uncompromising alliances with America’s most formidable foe. It is a new and different day.

“We are truly seeing the end of White world supremacy in the U.S. in particular,” said Mr. Baraka. He foresees the shift continuing into 2022 which he expects to be a dangerous year because “White folks have decided before they actually lose power” that they will fight it out—even if it means destroying the entire planet.

The danger is compounded by the possible use of Hypersonic weapons in the Indo-Pacific region. Hypersonic weapons are considered the new arms race mainly between the U.S., China, and Russia. The weapons are missiles that travels at Mach 5 or higher, which is at least five times faster than the speed of sound. America projects weapons it is testing, will be completely operational by September, 2022 or later in 2023.

China tested hypersonic weapons over the summer which was a point of friction with America.

Secretary of Defense Lloyd Austin said America is concerned about the military capabilities China is developing. Speaking at the Reagan National Defense Forum in California in early December, Mr. Austin said China is the only competitor capable of combining economic, diplomatic, military, and technological power in a sustained challenge.

“China’s military is on pace to become a peer competitor to the United States in Asia—and, eventually, around the world,” acknowledged Mr. Austin.