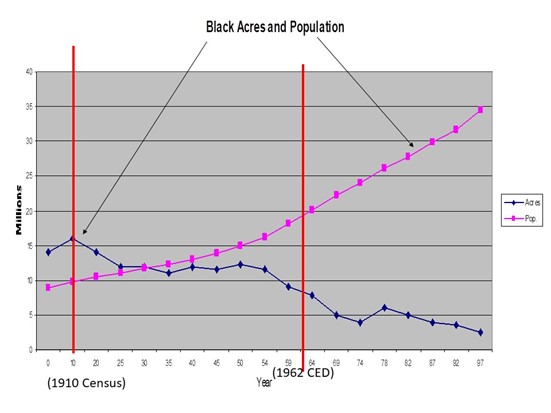 “There is the great calamity of starvation and great destruction of health and of lives by the use and administering of poison drugs, which is practiced upon those who are free and those who are bound. The water and the air of America are being polluted by chemico-bacteriologists America’s scientists of war conduct dreadful experiments on how best to kill human beings by the millions and wipe out the life of whole continents.

These are the days of fulfillment of prophecy of not one, but of many calamities. But in all of these preparations of destruction of human life by the devil Allah(God) too has plans to save His people.” –The Honorable Elijah Muhammad, “The Fall of America”

The first step in America’s use of food for depopulation purposes was to remove the people off the land. This was the same method used in the Bible by Joseph, when he took the land of the Egyptian people, gave it to Pharaoh and herded the Egyptians into cities.(Genesis 47:20-23)

The U.S. Census of 1910 records prove that only 45 years after chattel slavery the Black population had increased to 10 million and had purchased 16 million acres of land. We had schools, hospitals, and 60 small towns in the South. Through mass terrorism and multiple forms of theft, America lynched Black landowners and ran them off their land.

In 1962 the USDA brought in the Committee for Economic Development to develop a plan to increase the removal of Black people off the land. This report reads in part:

“Net migration out of agriculture has been going on for 40 years, and at a rapid rate. Nevertheless, the movement of people from agriculture has not been fast enough … .” This “Adaptive Approach” recommended that:

Of course, the most “suited for survival” were White, not Black farmers, so they reduced agricultural prices then subsidized the White farmers with taxpayer money to buy the Black farmers out.

Once the people are pushed off the land there were far fewer hands for weed control, opening the door for an increase in the use of herbicides. By 2008, American farmers were spraying 10 times the amount of herbicides used in 1960. American farmers thought they were just killing weeds, when in fact they were used by the government to kill people through genetic manipulations.

The industrialized countries which now depend on modern herbicides have pushed these same methods and herbicides on the rest of the world. The preferred method of depopulation since the 1940s has been sterilization. These herbicides reduced sperm count by 40-50 percent worldwide and has increased erectile dysfunction in men over 40 by 52 percent. In terms of birth defects caused by herbicides, some high use areas have experienced double the number of birth defects in newborns.

We now know that the USDA and Department of Defense have supported the development of genetically modified organisms (GMOs). The seeds from these GMO crops are owned by the seed companies and not the farmer who plants them. He has to pay a user’s fee to plant them each succeeding year. In the 1990’s the USDA developed terminator gene technology to prevent farmers from saving GMO seeds to grow crops for the coming year, thereby forcing them to buy these very expensive seeds each year.

In 1999, the Department of Defense, through its weapons development arm, Defense Advanced Research Projects Agency (DARPA), gave $2.8 million to a small genetic engineering company (EPIcyte) to produce “an anti-sperm antibody to prevent contraception.” Monsanto then teamed up with its rival, Dupont; the two made a joint purchase of EPIcyte in order to acquire its “spermicide” and put it in their various brands of genetically modified plants.

In 2010 , the Bill & Melinda Gates Foundation Trust disclosed that it purchased 500,000 shares of Monsanto shares for just over $23 million. Since 2006, the Bill & Melinda Gates Foundation had collaborated with the Rockefeller Foundation, an ardent promoter of GMO crops for the world’s poor, to implement the Alliance for a Green Revolution in Africa (AGRA). AGRA is opening up the continent to GMO seeds and chemicals sold by Monsanto, DuPont and Syngenta. As of 2010 the Foundation had given $456 million to AGRA.

Through use of deception and limitless wealth, Eugenics disciple Bill Gates has gained control over two major instruments of depopulation: plyphosate and a spermicide are bioweapons engineered into major crops of the U.S. and planned for the rest of the world.

In America 88 percent of the corn is GMO; 93 percent of the soybeans are GMO and 94 percent of the cotton is GMO. Most processed foods will have combinations of corn, soybeans and cottonseed oil. Most of the meats are not grass fed, but are produced in cages or feedlots which fill their bellies with GMO corn and soybeans.

Not only have herbicides destroyed the ability of people to reproduce, these GMO crops have reduced the production of native varieties and the food consumption of many people has been shifted from locally grown grains, fruits and vegetables.

Globally, one in five deaths are caused by diets with too low amounts of whole grains, fruit, nuts and seeds compared to diets with high levels of trans fats, sugary drinks, and high levels of red and processed meats. Diets high in sodium, low in whole grains, and low in fruit together accounted for more than half of all diet-related deaths globally in 2017.

Now that the co-morbidities of heart disease, diabetes, obesity, strokes and cardiovascular conditions are rampant in the Black community, due to a life-shortening diet caused by policies and programs of the USDA and Department of Defense, there is a perfect storm for a so-called “novel” coronavirus that attacks our weakened immune system with fatal results. And who comes to the rescue with a “vaccine,” which is itself genetic manipulation? The same wicked villains that put the American people in this weakened state, Bill Gates and DARPA.

Bill Gates and DARPA have funded numerous gene therapy startups including Moderna and companies that produced technologies for Moderna’s so-called Covid-19 “vaccine.” In 2013 DARPA awarded Moderna up to $25 million to research and develop its “messenger RNA therapeutics platform as a rapid and reliable way to make antibody-producing drugs to protect against a wide range of known and unknown emerging infectious diseases and engineered biological threats.”

In 2016 the Bill & Melinda Gates Foundation advanced Moderna $20 million to develop mRNA-based technologies to fight various infectious diseases with an additional $100 million on the table, if such technologies showed a promise of marketability.

Now Bill Gates has become the largest individual owner of farmland in America. Simultaneously, the Department of Defense is funding research to develop viruses that can be put into insects that will go into a field and alter the DNA of the crops, making them into “Edible Vaccines.” We must remember that Bill Gates said that “vaccines” could help reduce the world population by at least 15 percent.

In addition to all of these Satanic efforts, Gates is a major funder in the development of the popular “Fake Meats” produced in laboratories, not farm animals. He has invested $50 million in the Impossible Foods brand alone and actively finances Beyond Meat, Ginkgo Bioworks and BioMilq.

BioMilq proudly touts itself as a female-owned company and the first to “create human breast milk in a lab.” To further develop the idea of “edible vaccines” and “synthetic foods” Bill Gates has built a huge nanotechnology research and development institute on the grounds of North Carolina A&T State University, a prominent HBCU and my undergraduate alma mater.

His building will house the newly instituted “JOINT SCHOOL OF NANOSCIENCE AND NANOENGINEERING.” It’s located on a street in Greensboro, N.C., formerly called Lee Street, now renamed E. Gate City Blvd., after Gates took over a part of NC A&T’s farmland to build his research facility. “Aggie Pride” (Agriculture Pride) has almost died, replaced by Gates’ plans from the Dark Side.

Now, in real time, Bill Gates, Moderna, Monsanto and the U.S. Government through the Department of Defense weapons arm (DARPA) stand fully exposed as being foremost among “America’s scientists of war.” Again, recognize that nearly 50 years ago the Honorable Elijah Muhammad described them as those who “conduct dreadful experiments on how best to kill human beings by the millions and wipe out the life of whole continents.” Wake up and run to Muhammad.