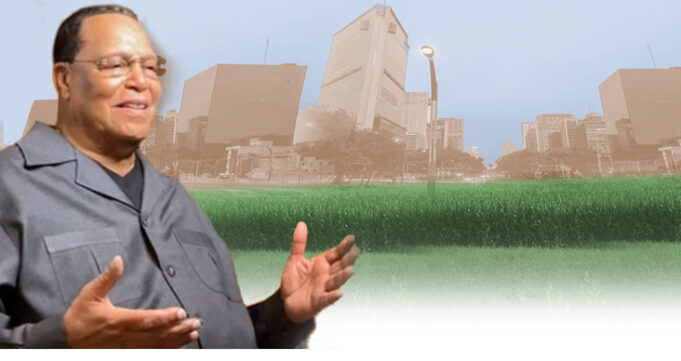 With the theme “Let Us End the Stagnation by Building Our Own Black Nation,” the fourth summit of the Nubian Leadership Circle (NLC) was held virtually in early December. A capacity of 1,000 participants viewed via Zoom and tens of thousands more viewed via Facebook and other live media streams.

But it was the question raised by the Honorable Minister Louis Farrakhan in his keynote remarks that presented food-for-thought as summit organizers continue their deliberations on the subject in future gatherings.

“What kind of nation do we really want?” he asked, explaining that America is a declining nation that is “unraveling before our eyes.”

“There is no nation that is an example of perpetuity because something inherent in their rise and fall has taught us they are not good examples for us to follow. America can’t be the example of the nation we desire to be,” he said.

Delivering words while seated in front of a fireplace in his Michigan home, the Minister said greed, lies, corruption and thievery are characteristics of America that are bringing her down. What will make the new Black world survive the dynamics of the rise and fall of nations, he asked?

He spoke after opening presentations Dec. 4 by convener Sadiki Kambon and Bwanda D. Albert, executive director of the Institute of Pan Afrikan Cultural Education in Boston. Participants then gathered in seven nation-building “cadres” to discuss areas of family essence, art and culture, spiritual renewal, communications and technology, land and food, economic development, and health and education.

The Minister said European stewardship has defiled Black people in America, making the descendants of slaves hate themselves and emulate White characteristics. He said Black people are becoming their own worst enemies, and the hidden hand of Satan guides the cultural expressions that produce crime and havoc in Black neighborhoods.

“We came up under European leadership. We could say we’ve come up under the devil himself. There’s nothing they have done that is in harmony with good and righteousness,” he said.

A hidden hand has guided rap music away from the unifying messages of its origins into the denigrating presentations aired on radio stations today, he explained.

White influence and culture have even engulfed Africa, he continued, admonishing the continent to reject the lifestyles of Europeans that promote same sex marriage.

“I love each and every one of you,” he stressed. “But God created everything in pairs … that keeps the life of that species continuing. Love for the same sex, for one another, that’s rooted in righteousness is wonderful.

“But when you take it to the extreme that Satan has caused us to do … we have gone to the extreme under the tutelage of a real Satanic mind. I’m not speaking down to you. I know who made you into what you have become,” he said.

Quoting the Bible, Min. Farrakhan said the new Black nation envisioned by summit organizers must be rooted in righteousness because eternal life is only in righteousness. Righteousness exalts a nation, but sin is the reproach to any people, he said.

To live right is simple, but living unrighteous lives bend a people to the lower levels of existence, he continued. White people cannot be followed because of their deviation from natural laws, he said.

Envy and arrogant self-pride also are destroyers of nations, the National Representative of the Honorable Elijah Muhammad explained. He lifted the value of the female, admonishing men to “free the woman” so she can be what Allah (God) created her to be. Celebrate her God-given gifts that allow her to help the man reach the goals they have set, he said.

He closed his remarks with words of caution.

“The moment we want a nation, here comes the corrupter,” he said, illustrating his comment with the story of Jesus and Satan on a mountaintop overlooking the cities. On that mountain, Satan offers Jesus rulership over the cities if he would bow to him as master.

“If you’re enslaved to the covetousness of yourself, where you see what God has blessed Africa with … and you call it your self-interest to rob others of what God gave them … we have to separate from that mentality. The poison, the toxicity of their (Whites) way of civilization will destroy our nation before it gets up,” Min. Farrakhan said.

This was the second message to the NLC delivered by Min. Farrakhan. He was the keynote speaker at their maiden summit in December 2020 viewed by 260,000 worldwide. During that presentation he suggested that the NLC convene its summit quarterly, which they have implemented.

The NLC conducts its affairs under the umbrella of “operational unity,” uniting with other organizations to “build a nation within a nation.” The fourth summit also marked a year of NLC work and nation-building efforts.