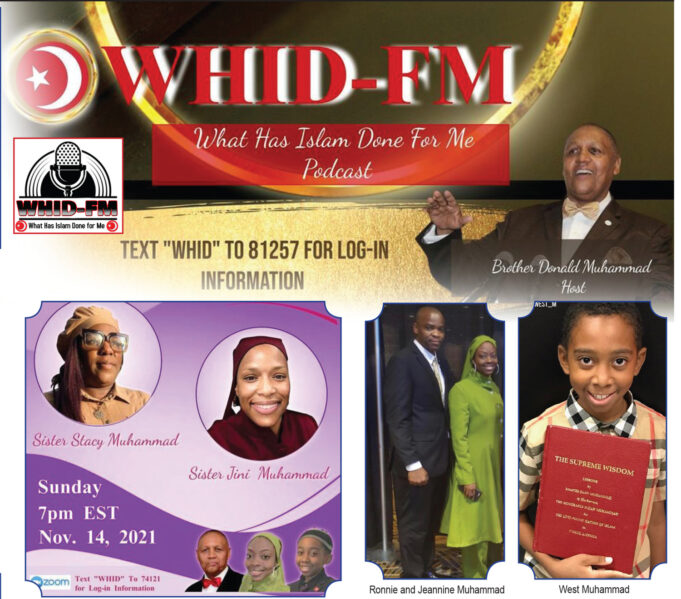 Every Believer that walks as a Muslim in the Nation of Islam has a unique story to tell and their journeys are the focus of WHID-FM, “What Islam Has Done For Me.” WHID-FM is a podcast program hosted by Donald Muhammad, joined by co-hosts Jeannine Muhammad and West Muhammad.

The program airs every Sunday, 7 p.m. EST, and listeners have an opportunity to hear the answer to an obvious but intriguing question: “What has Islam done for you?” The program is in its 4th season. WHID-FM started Aug. 2, 2020, and each season is 20 episodes.

“As a child, I didn’t talk much. My mother told me when I became grown, I made up for it,” said Donald Muhammad, who is based in Baltimore along with his co-hosts. “So I’m saying that to say, I’ve always had a big mouth. I’ve always liked to talk and I’ve always wanted to do something that involved speaking.”

When asked about how he came up with the idea for WHID-FM, he recalled Minister Louis Farrakhan lecturing to DJs all over the country at a fundraiser in Atlanta. “I studied disc jockeys on the radio but I noticed they would have a lot of silliness going on. So when I first heard the Minister, the first lecture I heard from him … he was talking to a group of DJs and that kind of sparked inside me.”

“Fast forward, you know I wanted to put something on social media that allowed the Believers to come and talk about their lives and I wanted to give it a name that sounds like a radio station. I wanted to inspire people through the airwaves,” he said.

His idea emerged fully during the Covid-19 pandemic and lockdown across the nation. The online segments cover a variety of topics including marriage and second chances the Nation has given Believers.

Jeannine Muhammad was interviewed with another Believer. Donald Muhammad asked her a week later to join his program and again the following week until she became officially a part of the show. “It’s a wonderful thing to be on this show. During the pandemic, I felt I wanted to do more.

The Honorable Minister Louis Farrakhan always asks, who am I helping? And I was trying to think during that time what could I do to help the Minister while we’re in shelter and in place. So really, it came at the right time,” she said.

Ronnie Muhammad, Sister Jeannine’s husband, works behind the scenes with the trio. He also is a DJ and helps the mosque in Baltimore with audio work. He is tasked with queuing the music and displaying pictures during the broadcast.

“I started off as a fan! I was very intrigued by the show!” said West Muhammad excitedly. He is 12 years old and the youngest of the three co-hosts. “I watched every episode and I began bonding with Brother Donald in the process. WHID gives us the opportunity to tell our story and give our history.

As a junior in the Nation … it feels like I’m in the backseat of a vehicle alongside the crew.” Donald Muhammad has high expectations that West Muhammad will continue what he’s started. “I think it’s a great outlet for Believers to come on and share their walk in Islam,” he said.

Jeannine Muhammad chimed in, saying anyone can join the audience via the WHID-FM Facebook page where the program is streamed live. Donald Muhammad encouraged Believers to send an email if they want to offer to give their own testimony.

As the trio of hosts themselves, they have their own testimonies.

Donald Muhammad gives thanks to his wife, Sister Cynthia, for helping him behind the scenes and his two wonderful sons Brother Emmanuel and Brother Ishmael. Jeannine Muhammad thanks the strong local leadership in the Baltimore mosque of the Nation of Islam, including Student Minister Carlos Muhammad, Andrew Muhammad, student FOI captain, and MGT Student Captain Leslie Muhammad, who leads the women in the mosque. West Muhammad paid tribute to his mother, Sister Tya, as his source of strength.

Donald Muhammad’s hope is the show will reel in a wider audience. WHID-FM offers important insight into the humanity in the Believers and shows those looking in from the outside that we as Black people have a lot in common.