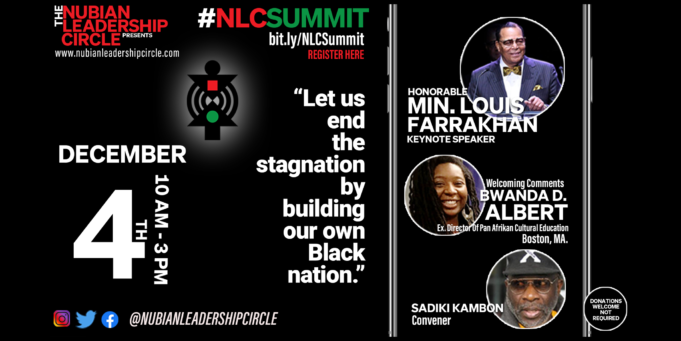 Land and real estate acquisition, independent education, health, family development and spiritual stability and renewal are just a few key areas needed for Black nation-building and the time is now to move out and step up in making that a reality.

This is the objective of the Dec. 4 “National Black Leadership Summit” convened by the Nubian Leadership Circle and it’s an “all hands on deck” approach, say organizers.

Around the country, Blacks are uniting, pooling their resources and working together in efforts to do something productive for themselves and their communities. They are moving out on the guidance and examples of great luminaries such as Marcus Garvey and the Most Honorable Elijah Muhammad.

Black folks are coming to the realization that it’s nation time! Blacks have started purchasing farmland to grow and harvest their own healthy foods, establish communities, open businesses, take charge of their children’s education by homeschooling, and holding in-person and virtual strategizing and planning sessions to work together.

Mr. Muhammad taught for Blacks to be successful, “we must have some of this earth to produce our peoples’ needs.” The Eternal Leader of the Nation of Islam also taught on the importance of supporting Black-owned businesses and institutions.

“First we must stop being so foolish as to spend our few hard earned dollars with the rich of this land. Those of us who are wealthy or rich should help set up independent businesses which our people need and which could add wealth to our communities. With such cooperation our own businessmen could actually help lower prices and provide employment for the multitude of unemployed,” he wrote in his groundbreaking book “Message To The Blackman.”

Facing racism at school, bias from teachers and inadequate curriculums, more Black families than ever are choosing to home school children, according to a September NBCnews.com report.

“Last year there were more new Black-owned businesses proportionate to the total population than at any time in the last quarter-century, according to the Kauffman Foundation’s annual study. Black entrepreneurism ranked higher than for white-owned and Asian-owned companies, the group found,” reported latimes.com earlier this year.

“On average 380 out of every 100,000 Black adults became new entrepreneurs during the 2020 pandemic, up from 240 in each of the prior two years, according to the study based on census data,” the newspaper noted.

The Dec. 4 National Black Leadership Summit IV is another avenue and outlet for Black organizations and individuals to convene virtually to lend their expertise, ideas and suggestions to make even more progress for Black people in the U.S. and abroad.

Although the work has begun, more help is needed and appreciated from likeminded individuals. But organizers want to make it clear the focus is unity, not uniformity. Participation is encouraged by Black folks regardless of their religious or political ideology, economic status or ethnic or cultural background.

The essential principle of operational unity is “unity without uniformity.” In functional terms, operational unity allows organizations to retain their autonomy and independence while working collaboratively and collectively in the best interest of the national Afrikan/Black community on issues, programs, projects, and initiatives on which there is mutual agreement, stated organizers.

“Our effort is clearly about getting the work done,” said Sadiki Kambon, longtime activist and the convenor of the summits. Blacks from the UK and Haiti have participated in prior summits. Young people are also encouraged to participate, he said.

Another goal is to establish Nubian Leadership Circle Summit satellites throughout America and abroad with the eventual aim of developing a national strategic plan to address the issues and conditions of Black life and ultimately build a Black nation. The gathering is bringing together Black thought leaders to discuss unity in serving the needs of Black people across the country and parts of the world.

Summit IV will feature reports on progress in the eight working areas accomplished since the previous summit.

The Honorable Minister Louis Farrakhan of the Nation of Islam supports the National Black Leadership Summits and is slated to deliver a major message once again to participants and viewers Dec. 4.

The Minister will deliver keynote closing remarks at the summit.

For info contact: [email protected] or 202-922-6527 and to register for the conference which is free and open to the public visit www.nubianleadershipcircle.com.