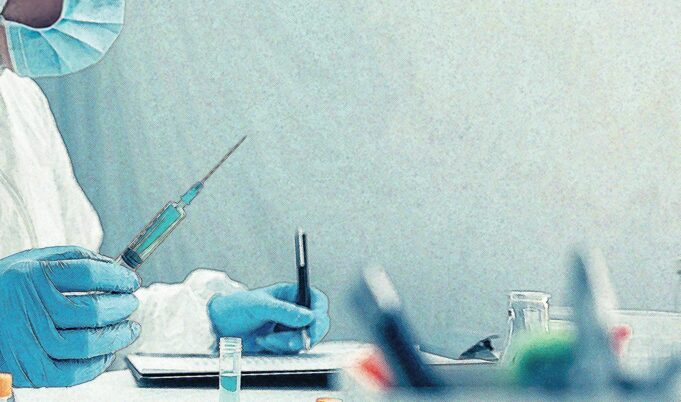 A panel of highly respected, scientists, researchers and medical professionals participated in a roundtable discussion on federal vaccine mandates on November 2. The event, which included men, women and children who had been injured or lost family members to the Covid vaccines, was hosted by Senator Ron Johnson, R-Wisconsin.

The victims said that beyond the trauma of injury to themselves or family members during clinical trials or after the deployment of the vaccines (under the FDA Emergency Use Authorization), they have been ignored, mocked, ridiculed and left in the lurch by the same government responsible for ensuring their safety.

“Telling the truth in today’s cancel culture is not necessarily easy. You can pay a pretty heavy price,” said Senator Johnson, as he thanked participants of the three-hour, tearful discussion. The hearing, “What is the Rationale for the Mandates? There is No Rationale,” is accessible at ronjohnson.senate.gov.

“It is a real shame that we are having to hold this round table. Had government officials, the heads of our health care agencies, had they been doing their job, had they been honest and transparent with the American public, we wouldn’t be here today,” he said.

Ernest Ramirez of Edinburg, Texas, cried profusely as he talked about his son, who contracted myocarditis (inflammation of the heart muscle) after getting Pfizer’s “vaccine.” “It was like playing Russian Roulette. My government lied to me. They said it was safe,” stated Mr. Ramirez. “What they did to my son, they knew what was happening. I consider that murder,” he said.

He considers the suffering of children who are vaccine injured child abuse and questioned why something isn’t being done?

Critics of the U.S. Government’s COVID-19 vaccine campaign say the short answer is the federal government, Big Pharma and corporate-controlled media, are all joined together by greed and a depopulation agenda. They have conspired together to get the total population of this country and the earth injected with the vaccine and boosters.

Remember, as the Food and Drug Administration gave Moderna’s “vaccine” its second Emergency Use Authorization, the federal government kept escalating its campaign to pressure Black people into taking the experimental mRNA gene therapy. The Biden Administration’s $115 million strategy has included carting out Black doctors, nurses, politicians and celebrities to allow themselves to be filmed taking the shot or do commercials for it.

Any voice or information proving the dangers of the so-called vaccines and contradicting the dominant narrative is censored and outright blocked from the public in print, TV, online, and social media. Expert opinions of medical doctors, scientific experts, researchers, activists and health freedom advocates are slandered as “anti-vaxx” or purveyors of “disinformation.” The aggressive, oppressive tactics have left many who want to speak out whipped into submission, afraid of being eliminated, noted several of the panelists.

Nonetheless, day-by-day, more and more people are rejecting the “vaccines” and federal mandates, and coming to see that what the Honorable Minister Louis Farrakhan warned of in his July 4, 2020 Message, “The Criterion”: the “vaccine” is death itself.

“It’s government policy to reduce the population of the Earth by two to three billion people. You

know that, right? If you don’t know it, I’ve been telling you about it. And they are using methods that Zbigniew Brzezinski mentioned,” stated Minister Farrakhan.

Brianne Dressen, an Astra Zeneca clinical trial participant from Utah, is among the tens of thousands injured who have found each other and now fight against federal vaccine mandates.

On November 4, 2020, Ms. Dressen suffered a life altering reaction and a cascade of neurological systems that persisted for months. While her life has improved, she said she still feels like she’s being electrocuted 24/7. “We had it happen with all of the brands. Over 70 percent of us had had no previous existing health condition. Over 94 percent of us have not had any problem with any previous vaccine. Ninety-eight percent of us have had all of our previous vaccines, the vast majority of us even having our flu vaccines. We are not anti-Vax.”

America is not in a “pandemic of the unvaccinated,” said Dr. Peter Doshi, a senior editor at The BMJ and associate professor of pharmaceutical health services research at the University of

“But if hospitalizations and deaths were almost exclusively occurring in the unvaccinated, why would booster shots be necessary? Or why would the statistics be so different in the UK, where most COVID hospitalizations and deaths are among the fully vaccinated … I’m saddened that we are super-saturated as a society right now in the attitude of ‘everybody knows,’ that has shut down intellectual curiosity and led to self-censorship,” he added.

Meanwhile, because the CDC and FDA continued to ignore their pleas, the vaccine injured advocates quickened their pace, when they saw the same injuries were happening to children like Maddie de Garay, according to Ms. Dressen.

Maddie became injured after participating in the Pfizer clinical trials when she was 12. She is 13 now and it has been over nine months since she got her second dose, “She can’t walk. She’s in a wheelchair. She has an NG (nasogastric – reaching or supplying the stomach via the nose) feeding tube for all of her nutrition. She has constant pain in her stomach, back and neck … She can’t feel her legs. And that’s just the tip of the iceberg,” said her mom, Stephanie de Garay.

After her first dose, she experienced a typical reaction with fever, body aches and fatigue that subsided in a couple of days. She had immediate pain after her second dose, according to her mom. In less than 12 hours, Maddie developed severe abdominal pain, horrible nausea, painful electric shocks on her spine and neck, ice cold hands and feet, full body pain, numbness in her vaccine arm, and chest pain. “The way she described it, it felt like her heart was being pulled out of her neck,” said her mother.

According to Ms. de Garay, although her daughter experienced over 35 adverse events, a New England Journal of Medicine early release article dated July 30, 2021, about the Pfizer COVID Vaccine in Adolescents mentioned none of them. Not the blood in Maddie’s urine, her decreased vision, paralysis from her waist down, dizziness, fainting, tremors, muscle weakness, nor the nine emergency room visits for a total of 63 days by June 1, before the article came out. That was also around the same time that the FDA approved the vaccine for children 12 to 15 years old.

“They did everything in their power to hide everything that happened to her and that is why this is happening to all these other people and kids,” said Ms. de Garay.

The advocates reached out from their sick beds to all political representatives on health and education committees, but to no avail, said Ms. Dressen. They went to the National Institutes of Health and have participated in studies with well-accomplished academics from reputable research institutions across the country, she said, but none can get their research published.

“We then reached out to the media, being repeatedly told that ‘we can’t make the vaccines look bad,’” she stated.

Dr. Bob Kaplan, distinguished Professor Emeritus at the UCLA School of Public Health and Medicine, and a NIH associate director and a former Chief Science Officer at the Agency for Healthcare Research and Quality said that he supports vaccines and has been vaccinated himself, but he does have concerns about research integrity and the process used to authorize, approve and mandate vaccines during the COVID emergency.

People are being told to trust the science when in fact scientists rarely agree, and advancement in science depends on colleagues challenging the prevailing wisdom, he stated.

Part of Dr. Kaplan’s concerns is that serious scholars have not been able to examine the raw data that justify the FDA and the CDC decisions. The evidence comes primarily from highly curated, industry-controlled press releases, and press releases lack the detail scientists need to offer objective evaluations, he said. “More disturbing is that the vaccine manufacturers are not honoring requests to provide raw data.

Pfizer, for example, will not make data public, publicly available till 2025. This is really an unacceptable delay for a product that would be used by billions of people worldwide.” More transparency is crucial and people need to insist on independent data analysis by investigators who are not employed by the vaccine manufacturers. “We must engage patients in the decision process.”

Still believe that the COVID-19 “vaccine” is safe and effective?