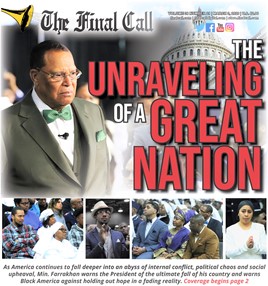 “I always shall rise to your defense against such an artful, wicked race of people, who have nothing in mind but death for the Black man – their scheme covered with a semi-bait of good. Once you have swallowed it, it is death.” –The Most Honorable Elijah Muhammad

America, the Great Serpent, has her own people and the world ensnarled in a sinister grip of lies; lies produced by a carefully planned script to enrich a few and take or ruin the lives of the masses. However, the Honorable Minister Louis Farrakhan warned us at Saviours’ Day 2020 in Detroit, Michigan, that we would see “The Unravelling of a Great Nation.” The current bout between two heavyweight snakes, Moderna and the National Institute of Health(NIH), over who will get credit, patent rights and billions of dollars for the “N.I.H.-Moderna Covid-19 vaccine” is a prime example of this unravelling.

According to a November 11, 2021 www.Reuters.com article, “Moderna COVID-19 vaccine patent dispute headed to court, U.S. NIH head says,” NIH Director Dr. Francis Collins told Reuters, “I think Moderna has made a serious mistake here in not providing the kind of co-inventorship credit to people who played a major role in the development of the vaccine that they’re now making a fair amount of money off of … It’s not a good idea to file a patent when you leave out important inventors, and so this is going to get sorted as people look harder at this.”

NIH asserts that three of its scientists—Dr. John Mascola, Dr. Barney Graham and Dr. Kizzmekia Corbett—helped design the genetic sequence used in Moderna’s “vaccine” and should be named on the patent application. You may remember that Dr. Anthony S. Fauci, who oversaw the research as Director of the Allergy and Infectious Diseases Institute (NIAID), said the “vaccine was actually developed in my institute’s vaccine research center by a team of scientists led by Dr. Barney Graham and his close colleague, Dr. Kizzmekia Corbett.”

Dr. Fauci specifically pointed to the contribution of Dr. Corbett. During his 2020 tour promoting the mRNA product to Black audiences, he characterized her as a role model for young Black women in science and someone that we should trust. In the end, she might get thrown under the bus for her complicity in developing what appears to be a bioweapon that destroys the target’s immune system.

Since Moderna and the NIH are co-conspirators in a global depopulation scheme, it would have been wiser for them to have worked this out in the darkness where they reside. Instead, fighting in the light of a federal court case can bring out all types of information hidden from the public. It is going to be exposed and “sorted” out. Do they really want people to “look harder” at this?

It must be noted that the Dr. Graham given accolades by Dr. Fauci, was Deputy Director of the NIH Vaccine Research Center before his retirement. He began his work on coronaviruses long before the “pandemic.” In 2017, Dr. Graham led a team of researchers, including Dr. Corbett, that figured out how to employ protein engineering to stabilize the spike proteins on the coronavirus before they fuse with other cells. (https://www.nytimes.com/2021/11/09/us/moderna-vaccine-patent.html)

What is “protein engineering?” “Protein engineering is the conception and production of unnatural polypeptides, often through modification of amino acid sequences that are found in nature. Synthetic protein structures and functions can now be designed entirely on a computer or produced through directed evolution in the laboratory.” (https://treehozz.com/how-does-protein-engineering-work)

Before March of 2020, most of us had no knowledge of “coronaviruses.” We learned that they have been around forever—this family of viruses includes the “common cold.” However, the media kept pumping COVID-19 as a deadly “novel coronavirus.” They assured the frightened public that a vaccine was being developed at “warp speed.” NIH scientists were actually using protein engineering to “stabilize the spike proteins on the coronavirus.”

In other words, they were engineering a synthetic protein to stabilize the most destructive component of a coronavirus which is the spike protein. NIH and Moderna are fighting over who should get the credit for fabricating a gene sequence that is shot into you in the form of these mRNA “vaccines.” Once injected, it instructs your cells to produce these same synthetic spike proteins by the trillions. Your own body actually manufactures the dreaded disease.

But it gets deeper. According to Dr. Lee Merritt, both the spike proteins in the SARS-CoV-2 “virus” and the sequence in the so-called vaccines are synthetic; not found in nature. Now Dr. David Martin steps in to show us Patent No. 7279327, issued to the University of North Carolina at Chapel Hill on April 19, 2002 for “Methods for producing recombinant coronavirus.” Recombinant DNA is DNA that has been formed artificially by combining constituents from different organisms. These people are interfering with the very fabric of life on our planet. They have discovered how to manipulate and artificially create organisms that have never been here before. But for what purpose?

Even though we were warned by the Most Honorable Elijah Muhammad that our open enemy works day and night to find ways to reduce the population of the indigenous people of our planet, it takes the words from the mouth of White people to show that he was right all along. For instance, in the British Medical Association’s 1999 book,“Biotechnology, Weapons and Humanity,” it states, “Genetic engineering of biological agents, to make them more potent, has been carried out covertly for years … ” (p. xviii). Former Defense Secretary under President Bill Clinton, William Cohen, quoted other reports about what he called “certain types of pathogens that would be ethnic specific so that they could just eliminate certain ethnic groups and races.”

Of course they have Black scientists working for them as they produce these ethnic-specific bioweapons that may not be what these scientists “think” they are working on. These scientists say—and probably believe—they are manipulating these coronaviruses to produce a “vector” for delivering synthetic proteins into our bodies ostensibly for “gene therapy” activities that would correct genetic defects in us that they say cause diseases. By “vector” we mean “an organism, typically a biting insect or tick, that transmits a disease or parasite from one animal or plant to another.”

Thus, viruses are not considered living organisms because they do not manifest the functions such as “metabolism, growth, reproduction, and response to stimuli or adaptation to the environment originating from within the organism.”

So, these mRNA “operating systems” are telling your cells to produce a man-made spike protein which is nothing but a poison, a “substance that causes injury, illness, or death, especially by chemical means.”

“Our findings reveal a potential molecular mechanism by which the spike protein might impede adaptive immunity and underscore the potential side effects of full-length spike-based vaccines.” (https://washingtonlatest.com/new-research-from-two-swedish-universities-found-that-covid-spike-protein-impacts-the-dna-and-also-impairs-dna-repair-proteins/). In other words, the spike protein can destroy your God-given immune system. These shots are aimed at making you defenseless against future microscopic poisons, which they will continue to synthesize in their laboratories of death. Heed the call of the Honorable Minister Louis Farrakhan and make your choice: “Separation or Death.”